Pinotage: Behind the Legends by Peter May 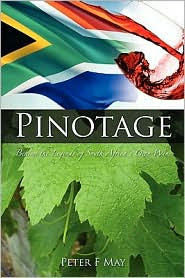 How much do you know about Pinotage? You might only know that it is a grape that originated in South Africa. Even if you know a bit more than that, you probably still don't know a lot about the grape. But as Pinotage plantings continue to spread to many different wine regions, it is a grape you may start hearing about more and more. So maybe you should be learn more about this unique grape. Plus it wouldn't hurt to taste and try some different Pinotage wines.

I recently reported on the publication of a new book all about Pinotage. Well, I purchased the book, eagerly devoured it and have returned to review it. Pinotage: Behind the Legends of South Africa's Own Wine (Inform & Enlighten, April 2009, $31.50) was written by Peter May, who also authors the Pinotage Club blog. The book is a trade-sized paperback of 238 pages.

This is a very comprehensive book, covering so many different aspects of Pinotage, from its origins to its future. I learned plenty about this grape, much of the information probably not available elsewhere. Peter also helps to clarify the facts behind the myths surrounding Pinotage. I enjoyed the stories about Pinotage wine makers and wineries. Overall, I was very pleased with this book and certainly recommend it.

The book begins seeking the origin of Pinotage, which has been shrouded in error and mystery. Yet in the end, you will learn the truth of when Pinotage was created, which grapes were used, and how it spread through South Africa. It is almost a miracle that it ever happened at all. I was amazed at the role a simple paintbrush played in the creation of Pinotage, and that the creator, Abraham Izak Perold, never got to taste a Pinotage wine.

Peter next discusses the growth, production and marketing of Pinotage, providing examples of specific wineries. Learn the role of an office stapler for joining scion and rootstock. Ever hear of a kuipe? It is an open concrete fermentation tank used by many Pinotage producers. There is even a discussion of Stormhoek Winery, who became very popular in large part to wine bloggers.

Next up, there is an interesting discussion of the various styles and types of Pinotage wines available, including rosé, sparkling, and dessert wines. The most fascinating varieties included a Pinotage Grappa and Pinarone, an Amarone style Pinotage! Have you seen the term "Cape Blend" on some South African wines? You can learn about the origins of this term, and efforts to create standards for the use of that term.

Pinotage is also grown in Virginia, Montana, Oregon, North Carolina, New York, Canada, Israel, Zimbabwe, Australia, Brazil, and Cyprus. And probably other wine regions by now too. New York was a surprise to me, though currently only a single winery near Seneca Lake produces a wine with Pinotage as part of the blend. Maybe Long Island wineries should give it a try.

Peter May has written an excellent and fascinating book about an intriguing grape and I recommend you check it out.
Posted by Richard Auffrey at 5:11 AM