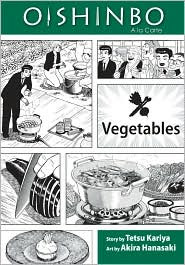 The fifth volume of the compelling Oishinbo series has just been released and is titled, Vegetables. It deals primarily with vegetables and though the subject matter is not my favorite, I still found the book enjoyable.

Like the previous volumes, this book begins with recipes: Asparagus with Walnut Dressing and Asparagus Grilled Kabayaki-style. Then there are eleven chapters and also like the prior volumes, the back of the book has a series of notes, many dealing with Japanese terms, concerning the text.

The first three chapters concentrate on a cooking contest using cabbage and turnip. They also raise an issue which will be visited again later in the book, an opposition to the use of herbicides and pesticides. This is a volatile issue in Japan, especially due to their limited arable land. One of my favorites quotes of the series is also in the first chapter: "Cooking is all about falling in love with the ingredient and trying to draw out its best in ever respect possible." (p.27)

Chapter Four deals with new potatoes, though the potatoes end up as the main headliner at children's birthday party. A father, who lost his lucrative job, feels bad that he can only provide his son boiled potatoes for his birthday. The previous year, the party had been an expensive and over the top celebration. But, the son much prefers the potato party because this year, his father is present at his party. His father had not been there at the fete the year before. The father thus learns a lesson about real happiness.

More moral lessons come in Chapter Five with a discussion of bean sprouts. A fatherless boy, who is pereceived as weak, is bullied by the other children at school. To stop the bullying, a cooking lesson is provided to the other children, where bean sprouts are added to shark fin soup. The soup is delicious on its own, but even better with the sprouts. The weak bean sprouts, which may not seem like much, actually have much power and make many dishes better. The head and roots had been removed from the sprouts, which is laborious and must be done by hand. The fatherless boy did all of the removal work and the other children gain a new respect for him.

Chapter Six discusses the eggplant. I did not know that a Japanese custom during the Obon festival was to place chopsticks into eggpants to make them resemble cows and horses. They are then thrown into the river as an offering to the spirits of their ancestors. The chapter also gives you practical advice on selecting good from bad eggplants. Finally, it discusses a way to cook eggplant which should make even those who dislike the veggie, enjoy it.

Next up, Chapter Seven is concerned with environmental issues. It touches on issues from the use of disposable chop sticks to the use of pesticides. Chapter Eight deals with asparagus, contrasting the Japanese type from the French type. Japanese asparagus tends to be lighter and have a blander flavor. Thus, you should generally not use the same sauce for Japanese asparagus as you would with French ones.

Chapters Nine and Ten then move onto the quest to prepare an impressive dinner for a special guest. There is mention of a deluge of books in Japan about food, a big craze, yet the main character mentions there is only a single food book worth reading: Days of Eating Earth by Minakami Tsutomu. That is a book I had never heard about before, and which does not appear to be available in English. The book is a dietary record of what the author cooked and ate, with ingredients taken only from his garden and the surrounding mountains. The author had trained at a Zen temple since as a child, and he was a vegetarian. "In other words, the time you take to cook and eat is one huge event that our lives depend upon." (p.228)

The final chapter returns to the subject of the use of pesticides, urging people to buy more organic products.

This volume of the series was once again educational and thought provoking. I definitely recommend the entire series to any foodie. I will continue to look forward to the next volume of the Oishinbo series. Sadly, there are only two more volumes yet to be released.
Posted by Richard Auffrey at 5:32 AM