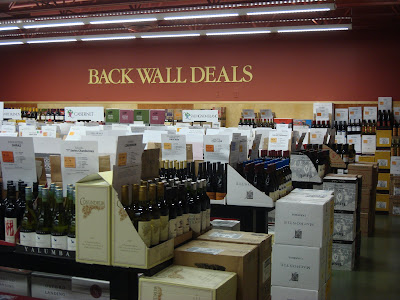 A new wine store, Wine ConneXtion, opened this week in North Andover and of course I was very curious to check it out. Fortunately, I was invited to a special blogger event at the store last night. I arrived early though, to do a little surreptitious reconnaissance on the store. I wanted to see what it would appear like to an ordinary consumer who walked in off the street.

Wine ConneXtion is run by Wine Director Sam Messina and Business Manager Tina Messina (Sam's sister). Sam has over 30 years of experience in the industry and Tina has over 20 years. So they are not newcomers to the wine world. They bring with them lengthy experience and plenty of knowledge.

I got to meet both of them and chatted at some length with Sam. He was very personable, down to earth and showed that passion for wine which I always seek. He is definitely not a wine snob and I see much potential for this new store. He is also very open to suggestions and constructive criticism. The store is a work in progress, which will grow and develop over the next few months. 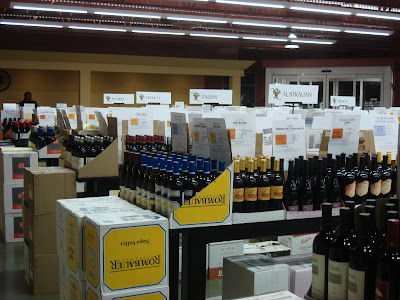 The store presents a warehouse atmosphere, the wines displayed in their own cardboard boxes. There are almost no fancy wine racks. This no frills ambiance would lead you to believe that this is a place for bargains. And that is exactly what you will find there. Their wine prices are some of the best you will find in Massachusetts, even better than BJs and Costco, and they are even competitive with the prices in the New Hampshire liquor stores.
For example, they sell the 2007 Caymus Cabernet for $56.99, which I know is cheaper than New Hampshire. Also consider their prices on the following other examples: 2007 Caymus Conundrum $17.99, 200 Silver Oak, Alexander Valley $59.99, 2006 Panarroz $7.49, and 2008 Tres Picos $12.29.
Face it, the average consumer is very concerned about prices, especially with the new tax on alcohol in Massachusetts. New Hampshire has become a chance for some wine lovers because of their low prices and no taxes. But now you don't have to go to New Hampshire because even with the tax, the prices at the Wine ConneXtion are still lower.
But price alone does not carry the day for other consumers. So what else does the store have to offer? First, they carry around 700 different wines, a fairly diverse selection of wines from all over the world. Wine lovers will recognize most of the labels but Sam stated they will start adding some more unique and esoteric wines in the future. They had a short time to stock the store so purchased what they could quickly. Second, the wines are not close outs or bin ends. They are the current vintages of all of the wines. Though once a wine is sold out, it may or may not be able again. Third, in 2010, the store will also start to stock some of the better spirits, though they will not carry beer. Fourth, and something which really thrilled me, is that they will eventually carry Japanese sake! 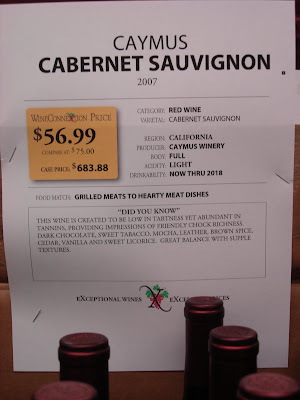 Each wine is accompanied by a descriptive sheet, which includes Drinkability and Food Pairings. That is a good idea and should help the average consumer looking to buy wine, especially if they want to pair something with dinner. One issue I did detect is that some of the signs bear the wrong vintage, not the vintage of the actual wine available for sale. That issue though should be fixed in the near future. On the pricing, the "compare at" price does appear fairly accurate. They did not artifically inflate that number to make their own prices look better. Please also note that you do not receive a "case discount" as the wine are already significantly discounted. 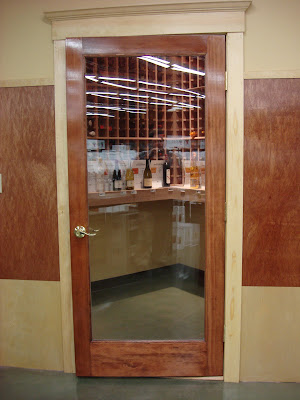 Wine ConneXtion even has a small, enclosed room for their more higher end wines, from Opus One to Cristal. Those wines also are significantly discounted. No matter how much you can spend at this store, you will find wines to match your budget. There are plenty of bottles priced under $10, as well as a few priced over $100. And if you do not see the wine you want, they might be able to special order it for you, with a similar discount. The store has a Tasting Station area, which is not fully completed yet. It will allow customers to taste some of the wines. It may end up as a type of self-serve area.

I think the store accomplishes what it has intended to do, to be a customer-friendly place with excellent values. And as they institute some changes in the near future, it should become an even better place for wine lovers. This is definitely a store I will return to and I highly recommend that my readers check it out as well.

This store looks awesome! Great deals too... wish there was one of these opening by me. :(