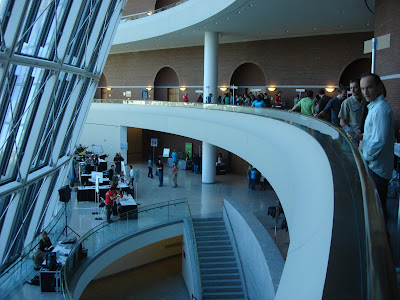 How does a Wine Riot differ from a Wine Expo? Can you expect a wilder, rowdier crowd at a Riot? Is a Riot even safe? I recently had the opportunity to answer these questions when I attended Wine Riot 2, a grand tasting event managed by The Second Glass.

The Wine Riot was held in three sessions, a VIP night on Friday and two sessions on Saturday. The VIP session cost $65 and was limited to only 500 tickets. The Saturday sessions cost $45 each and the afternoon session was limited to 750 tickets while the evening slot was limited to 1000 tickets. Already, you can see that the Riot is less expensive than the Boston Wine Expo, as well as smaller in scale. It is better that you don't have to fight thousands of people to get a taste of wine.

The event was held in the John Joseph Moakley United States Courthouse on the waterfront in Fort Point Boston. Certainly a strange venue for a wine tasting. Plus, this is the first time I ever attended a wine tasting where I had to first pass through a metal detector. The event took place on two different levels, and it was a spacious area with a beautiful view. 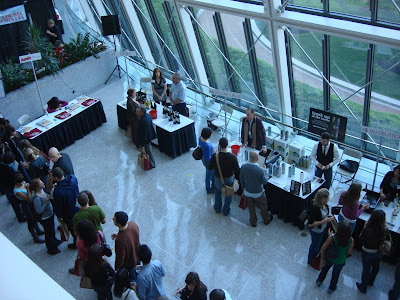 The centerpiece of the Wine Riot was a tasting of about 250 wines, a fraction of the number of wines available at the Boston Wine Expo, yet certainly an impressive amount of wines nonetheless. Even if you went to the Expo, it is unlikely you would taste more than 250 wines. The Wine Riot also had free wine seminars, a DJ, photobooth, lounge, and a few restaurants. Plus, you could purchase the wines, at a 20% discount for a mixed case.
I attended the Saturday afternoon session, including the special trade hour. Though it was relatively quiet during the trade hour, it was also very low key later during the regular session. I rarely had to wait at any table to get a taste of wine. And there was plenty of opportunity to talk to the wine makers, distributors and others manning the tables. It was very pleasant to walk around the event, much better than fighting the crowds at the Boston Wine Expo. There was a good variety of wines, enough for any taste, and I found some intriguing ones which I will post about in the near future.
The wine seminars, which were free, were basically 30 minutes classes, and they usually included wine tasting. They covered a nice diversity of topics, and the wine and chocolate seminar seemed to be the most popular. These are a good addition to the main tasting event.
My only complaint concerns food at the Riot. First, there was almost no free food available. It would have been nice to have at least some cheese and crackers at some of the wine tables. Second, though there were a few vendors selling food, they were not ready to sell anything for at least an hour after the event began. Third, none of the vendors took cash! By some arcane and twisted law, the vendors were prohibited from accepting cash since it was a court house. We did not have advance notice of this so there were people who did not have credit cards (or were unwilling to use them) to buy food. I hope they work on the food issues for the next Wine Riot.
Overall, I was very pleased with the Wine Riot. It was not a wild and crazy event, but was certainly fun. And there were plenty of good wines to taste and educational seminars to attend. It was a more comfortable event than the Boston Wine Expo and well worth its cost.
Wine Riot 3 will be held next year on April 16 & 17, 2010. Keep those dates open and plan to attend.
Posted by Richard Auffrey at 6:00 AM