The Manga Cookbook: From Onigiri to Karaage 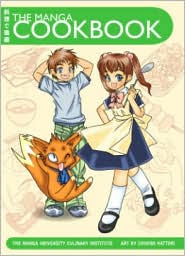 The typical American who saw the above book would assume it was only for children because of the cartoon figures on the cover. Many Americans still feel that comics are only for children though some graphic novels have acquired a degree of acceptance and respectability. That is not the case in Japan, where their comics, manga, are quite respectable and read by millions of adults.

Their manga cover a huge range of topics, including food and wine. Some of them have been translated into English, and others, their best ones, hopefully will be translated in the near future. I have previously raved about Oishinbo, a food manga, and The Drops of God, a wine manga which has yet to be translated into English. I have now read the above cookbook, done in a manga-style, and it certainly is not just for children.

The Manga Cookbook is presented by The Manga University Culinary Institute and illustrated by Chihiro Hattori (Japanime 2007, $14.95). It is a 160 page trade paperback featuring 27 recipes created by certified nutritionist Yoko Ishihara and the Manga University Culinary Institute. The actual content though is only 129 pages with the additional pages consisting of blank, lined pages for your own "Cook's Notes."

This cookbook was created for both novice and experienced cooks, the manga making it easy to understand for all. The recipes generally range from the easiest to the more difficult. A significant number of the recipes epitomize mitateru, a Japanese term which often refers to "food arranged to look like something else." Do you know those cleverly designed fruit/veggie "flowers" you see on your plate at Japanese restaurants? They are examples of mitateru.

The book does more though than just present recipes. It also starts with some introductory information on Using Chopsticks, Setting the Table, Before Cooking and About Ingredients (descriptions of common Japanese ingredients). Plus, after many of the recipes is additional information, often quite fascinating, about the dishes and ingredients. You will learn plenty of Japanese culinary terms as well as elements of Japanese culture. Overall, you get a nice introductory lesson about Japanese cuisine.

The recipes are broken down into several chapters including Appealing Appetizers, Obento Basics, The Main Course, and Welcome to Wagashi. Each recipe starts with a list of ingredients and then there are a series of manga illustrations and diagrams to show how to prepare the recipe. You will learn to prepare items including Onigiri (rice balls), Oshinko (pickles), Miso Soup, Tonkatsu (fried pork cutlet), Karaage (Japanese-style fried chicken), Teriyaki sauce, Okonomiyaki (Japanese-style pizza), and Anko Paste (sweet red bean paste). There are plenty of delicious and varied choices, many of the same items you will find at any Japanese restaurant.

I think the directions are very easy to understand and it should be simple for even novice cooks to make many of the recipes. The illustrations certainly are a benefit and the manga-format is fun. The most difficult thing might be finding some of the Japanese ingredients. Though most of the ingredients are fairly common, there are a few which might be tougher to find like adzuki beans and shiratamako.

But if you have a Japanese/Asian grocery store near you, the ingredients should be easy to find. I know that the Boston area has several such markets where the ingredients can be found. Plus, even many large supermarkets are now carrying some Japanese ingredients.

My biggest complaint about this book is that it is not long enough. The 25+ blank pages for notes seem unnecessary and I would have preferred to see more recipes. Though the recipes cover plenty of ground, there are plenty more recipes they could have added. But the recipes in this book will still keep you busy for many weeks.

Don't be fooled by the cover and think this book is for children only. For any cook seeking to learn the basics of Japanese cuisine, this should be an easy and fun introduction. I give it my recommendation and look forward to creating some of the dishes, especially the Onigiri as the latest Oishinbo whetted my appetite for rice balls.
Posted by Richard Auffrey at 6:00 AM