Saké Wins Over Some New Fans 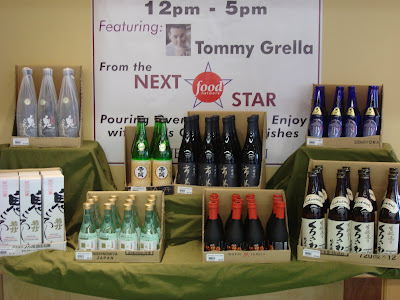 Yesterday, I was so excited when numerous people, who had little experience with chilled Saké, would take a sip and be so pleased with its taste. Their eyes would open in amazement and a big smile would come to their faces. They had not expected to enjoy the Saké, but truly had done so. And so my passion for Saké spreads.

For several hours, I led a kikishu, a Saké tasting, at the Wine Connextion in North Andover. There were eight different Sakés as well as food to sample and pair with it. As I poured each Saké, I explained about this mysterious brew, trying to give them a basic foundation to understand it. Many were eager to learn, asking questions which I did my best to answer for them.
I was glad to see some fellow bloggers there, including Mary of The Savory Kitchen and Kristin of North Shore Dish. Plus, it was nice to meet many new people. The people were very open to learning about Saké, willing to taste the different ones to see if they would enjoy any of them. They nearly all found something they enjoyed.

The Sakés we sampled included:

The Sparkling Saké was a major hit, even with people who generally did not care for the taste of Saké. Its bright fruit, compelling nose, and sweet taste really appealed to people. They often thought it would be an excellent pairing for dessert. Sam Messina, the owner of Wine Connextion, felt it would be great just poured over some fresh fruit, which sounds like a very good idea to me.
The Kurosawa was another crowd favorite, its creamy, earthy and mushroom flavors being a big surprise. It was also a very smooth Saké, making it very easy to drink and enjoy. The Wakatake Daiginjo was well liked, an amazingly complex drink with plenty of flavor. All of the others had their fans too, showing how people's preferences differ, just as with wine. I should mention as well that the prices for these Sakés are some of the lowest you will find locally.
The food was catered by Larosa's, a new Italian place in Andover. They served items like spicy Arancini, Panko-Crusted Chicken Skewers, BBQ Chicken Pizza, and Antipasto Skewers. Larosa's took over the spot where Mawby's used to be, and I had not previously been there. Their food was quite good, especially the Arancini, and paired well with the Saké, to the surprise of many. They were used to thinking that you only pair it with Japanese food, which is not the case. As like wine, the food sometimes changed the character and taste of the Saké.

I had a very fun time, pouring and talking about Saké, sharing my passion. It really pleased me that so many people seemed to enjoy it as well. I hope to do more such tastings in the near future.

Wow! Sounds like a good time was had. Nice read.

I had a great time at the tasting. I've been trying different sakes when I can, primarily at sushi restaurants (ironically, the food the Japanese don't eat with sake). It was great to try such a variety and to taste the differences side by side.

I'm drinking the Kurosawa tonight with shrimp biryani (an Indian-spiced dish) - will let you know how it pairs!

Sounds like a great event, and I love the Wine Connextion! They have such great deals on good, quality wine.

Rich, I'm sorry I missed this. It sounds great. I gave you a shout out in this post.

I hope I can make the next tasting, I'm sure it will be great!

Thank you, Rich, for an extremely informative and enjoyable afternoon event. I was amazed by the breadth of flavors you can find in something whose main ingredients are rice and mold! I definitely plan to share my sake and spread the word.

I am so glad that those of you who attended the event had such a good time, and enjoyed the Sake. I do hope to hold more in the future so that I can share my passion for Sake with others. Plus, I do hope to showcase some different Sakes, such as a Koshu, an aged Sake that reminds me of a Port.