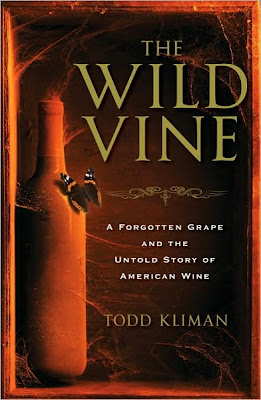 "Foxy" is usually a compliment, except when applied to wine. A woman who is "foxy" is considered attractive, while a man who is said to be "foxy" may be considered cunning and clever. But a wine that is foxy has an unappealing musky aroma and taste, and the term is most often used when referring to American wines made from vitis labrusca, not vinifera grapes. Hybrid grapes though often lack that foxy nature.
One such hybrid is the Norton grape, thought to be a cross of the Bland and Pinot Meunier grapes. It is discussed in more detail in The Wild Vine: A Forgotten Grape and the Untold Story of American Wine by Todd Kliman (Crown Publishing Group, May 2010, $25). It is a hardcover book, of 280 pages, and Kliman is the Food and Wine Editor of The Washingtonian, also having authored numerous articles for many different publications.

The Wild Vine presents a history of the Norton grape, from its creation in the nineteenth century to its current production across the U.S. Yet this history covers other wine matters as well, from the efforts of Jamestown through the effects of Prohibition. The book ranges from Virginia to California, with stops in places such as Missouri. You'll meet various interesting personalities, showing how the Norton gained fame, and then fell almost into obcurity.

I found the book both compelling and interesting, a well-written and intriguing tale. I learned a number of things from the book, which is always a good thing. One of the most fascinating bits of trivia was the origin of the term "foxy." The original Jamestown founders tried to produce wine made from native American grapes, vitis labrusca, but found the wines often gave off a musky character that they described as "foxiness." This term has remained with us even today.
The Norton grape was created around 1821 by a Virginia physician and amateur horticulturalist Daniel Norborne Norton. He wanted to create a durable, disease-resistant grape that would produce a delicious wine. And he succeeded. The grape became more popularized by a Long Island nursery which mentioned the grape in its influential catalog, calling it "Norton's Virginia Seedling." The nursery also published an influential book, A Treatise on the Vine, which gave raves to the grape.
The Norton grape then spread across country, including into Missouri where numerous German settlers were planting vineyards. Interestingly, most of these Germans were originally from northern Germany, and not the wine country of the south. By 1870, Missouri, with about 120 wineries, led the nation in wine production. And in 1873, a Missouri wine presented a Norton wine at the Universal Exhibition in Vienna, winning a Medal of Merit, and being one of only three wineries in the U.S. to win such a medal.
But that was a highlight which was soon eclipsed by the the growth of the California wine industry. Around 1870, Missouri had accounted for 42% of all of the wine in the country but by the turn of the century, it accounted for only 3%. California had become a wine power, able to produce grapes at half the price of Missouri. Prohibition would also do its best in hindering wine production across the country.
But around 1965, there was a resurging interest in the Norton grape, and it now is planted in numerous places, including Virginia, Illinois, Missouri, Texas, Arkansas and others. Kliman spends time discussing his encounters with Jenni McCloud, the owner and winemaker at Chrysalis Winery in Virginia. Jenni is an ardent advocate of the Norton grape. Kliman also mentions that Jenni is a transsexual, though I am not sure that information is really relevant to the matter, and almost seems too salacious.

The book has perked my interest about tasting some good wines made from the Norton grape. I was able to ask Kliman, via email, about which Norton wines he has tasted and enjoyed. Though he does not have detailed tasting notes, he has tasted Norton wines from Arkansas, Illinois, Missouri, Texas and Virginia. His favorite Norton wines came from Chrysalis (Virginia), Stone Hill Winery (Missouri), and Adam Puchta Winery (Missouri).
If you enjoy wine history books, I would definitely recommend this book. It illuminates a grape that is very American, yet which many may not have encountered before. It is well-researched, easy to read, and informative.
Has anyone else read this book yet?
Posted by Richard Auffrey at 6:00 AM

Insightful book if you are a Norton wine drinker or not. Admitedly it is more fun to read with a decanted bottle of Norton which has been let to breathe for at least 30 minutes. There are now 184 Norton vineyards in 22 states. After tasting over 84 Norton (Cynthiana) wines, some of my favorites come from: Three Sister (GA); White Oaks (AL); Century Farms (TN); Elk Creek (KY); Cooper (VA); Stone Mountain Cellars (PA), Blumenhof, Heinrichshaus, Stone Hill's Cross J, Adam Puchta & Robller (MO).

Thanks very much for your comment and Norton recommendations.

I am in the midst of reading this book and now feel like a complete beginner as far as American wines are concerned. And - thank you for that list of Norton vineyards - I'm on a quest now.

Is it Norton or Cynthiana? It really does not matter. What does matter though is that the Norton grape is a true American grape that enjoys more and more popularity with wine lovers. Since Mr. Bauer's comments (he is a devout Norton lover)more wineries have opted to make a Norton wine. One such winery is the Paradise Springs Winery in Clifton, Virginia. The grapes though came from Chrysalis which, by the way, has the largest Norton planting in world. The quality of those grapes every year have been phenominal. Go visit. In Vino Veritas