At any large wine tasting, I hope to find at least a handful of treasures, a few new wines which are extremely delicious, good values or especially unique. This past weekend, at the Wine Riot, a grand wine tasting run by the Second Glass, I found several such treasures. I was hoping that there might be some sherry and Saké there, like at their last event, but that was not the case this time.  Many of the same vendors from the last Wine Riot were at this event, so there was much duplication.  But there were still some new vendors, as well as some new wines. 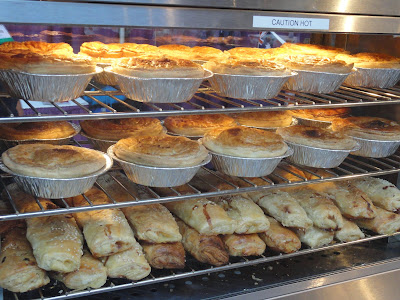 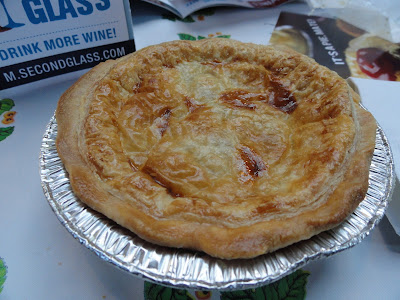 Prior to the Wine Riot, I had eagerly anticipated checking out the KO Catering and Pies booth, a new food vendor (which is not even open yet) that sells Australian-style meat pies. In the near future, maybe as soon as this week, they will open a store in the Fort Point neighborhood, as well as have a roaming food truck.  They will sell a variety of Australian favorites besides the meat pies.  At the Wine Riot, kind of their public debut, they sold Classic Aussie Meat Pie ($6), Irish Beef Stew Pie ($6), Curried Veggie Pie ($6), and Thai Turkey Sausage Roll ($4).

I tried the Classic Aussie Meat Pie, which is filled with lean ground beef, cooked with onions and spices in a beef tomato sauce.  They do not provide you a fork or any utensil as you are supposed to eat it as is, just sliding it out of the aluminum tray.  Being careful, I was able to eat it without any utensils, and without making a mess or dropping anything.  I did see a woman having difficulty with her veggie pie, as it seemed to fall apart. I liked the light, flaky pie crust, and the meat was moist and flavorful, spiced well. The amount of sauce was restrained, providing moistness to the meat but not so much that it seeped out of the pie once you bit into it.  It was delicious, and I would recommend them to others.  I will definitely be buying more meat pies as well as checking out some of their other products. 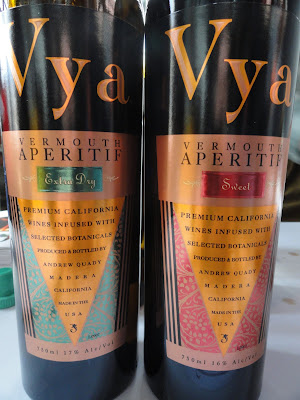 Now on to some wine.  At the last Wine Riot, I had stopped by the Quady Winery table but they were out of their Dry Vermouth, so I moved on.  I had tasted a few of their wines before and had been looking forward to tasting their vermouth.  This time, I was able to taste the vermouth, as well as another exceptional dessert wine. Plus, I had the chance to meet Andrew and Laurel Quady, the husband and wife owners of the winery, which is located in Madera, California.

Quady makes two vermouths ($20 each), an Extra Dry and Sweet, both made with about twenty botanicals.  The Extra Dry is a blend of Colombard and Orange Muscat wines enhanced by botancials made primarily from flowers and leaves, including Angelica, lavender, rose petals, linden and citrus.  The Sweet is blend of Tinta Roriz and Orange Muscat wines enhanced by botanicals made primarily from seeds, barks and roots. Those places are supposed to be where the energy is concentrated in the plants. Andrew said that it was as if they used the "dark side" for the sweet vermouth and the "light side" for the dry.

I initially tasted the dry on its own, and it had a strong herbal taste, which is the style Andrew prefers.  I enjoyed the dry vermouth, though it had a bit of a bitter finish. But it is obviously something you drink with a mixer, and not on its own.  By balancing the bitter finish, you can then enjoy the herbal taste of the vermouth.  I then tasted the Vya Cocktail, which is a 50/50 blend of dry and sweet vermouth and it too had a nice taste, the herbal notes balanced by a bit of sweetness.  The two vermouths are versatile products and could be used in a variety of cocktails.

But the highlight of this table, and probably the most unique wine at the entire event, was the Quady Deviation ($25/375ml), a blend of Orange Muscat with Damiana and Pelargonium. Damiana, also known as Turnera diffusa, is a shrub native to Mexico, Central America and South America, which has aromatic flowers.  The leaves were traditionally used to make tea which was reputed to have aphrodisiac properties.  The lemon-rose scented Pelargonium, also known as rose Geranium, is native to South Africa.  Both herbs are steeped in the wine for one week and then the wine is aged for a year before release.  It is made to be a dessert or after-dinner drink.

This was a fascinating wine, with some mild sweetness and citrus flavors up front, but ending dry and herbal.  I expected there to be a sweet finish too, so the dryness was quite surprising, and very enjoyable.  Offhand,I can't recall another dessert wine that has such a finish. Its complexity and unique taste made this wine really stand out and it earns my highest recommendation. 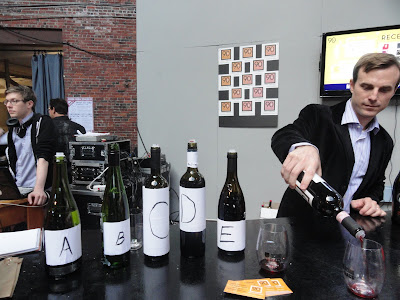 At the prior Wine Riot, I recommended a number of wines from 90+ Cellars, and Kevin and Brett made another appearance at the latest Wine Riot, bringing some new wines.  Plus, they conducted a fun blind tasting which let the attendees have some input on what wine will be bottled in the future. There were five wines, marked "A" to "E." and the sample that garnered the most votes will be bottled and sold next season under the Second Glass Wine Riot name.  The samples included a Cava, Alsatian Gewurtztraminer, Italian Montepulciano, Australian Bordeaux-style, and a Châteauneuf-du-Pape.  My two favorites were the Cava and Gewurtz, both excellent values. We shall see in the near future though which wine won. 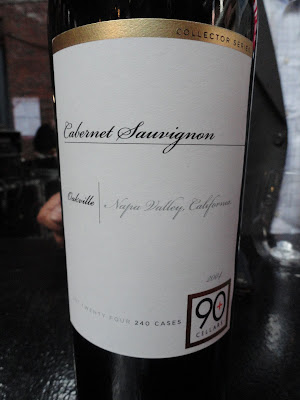 I was also very impressed with one of their new wines, the first in their Collector's Series, a line of higher end wines but still at significant discounts.  Lot 24 is a Cabernet Sauvignon from the Oakville appellation, well famed for Cabernet.  The original wine sells for about $67 a bottle but the 90+ price is only $23.99, a very deep discount.  Only 240 cases of this wine have been bottled by 90+ Cellars. This was an excellent wine, with an alluring and spicy aroma, and a complex, rich taste of black fruits, spice, violets and a bit of smoke.  A compelling value, you will find few Cabernets of this high quality at this low price. Highly recommended! 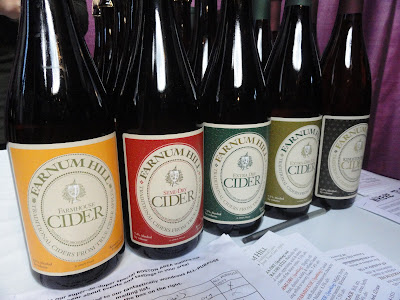 I was also interested in checking out the hard ciders of Farnum Hill Ciders, located in New Hampshire.  At the recent Chef's Collaborative Summit, I had tasted their Farmhouse cider, and really enjoyed it, especially with pork.  The Farnum Hill "Farmhouse" is a sparkling hard cider, made in a pub style, and is very easy drinking.  It has a prominent fresh apple smell, which also comes out on the taste, and only has a little sweetness.  It is food friendly, goes down easily, and it is something I can drink all day.  The Farnum Hill Extra-Dry Still is dry, with a stronger apple flavor, and is also very easy drinking and food friendly. If you do not want something with bubbles, this would be a very good choice.  A more intriguing brew was the Farnum Hill Kingston Black Cider, which is made from 100% Kingston Black, an English cider apple.  This dry cider has more depth and complexity.  Along with the apple flavors, there are some herbal notes, as well as hints of other fruits. There are all ciders worth checking out. 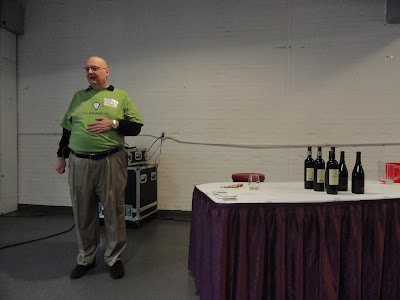 During the Wine Riot, there are numerous Crash Courses, brief educational seminars on various wine topics.  They are free for all Wine Riot ticketholders, though seating is limited.  They are an interesting way to learn a bit more about different wine topics.

I attended the "This Taste Like Roadkill, But I Like It" course, led by John Hafferty of Bin Ends, an excellent discount wine store in Braintree. The idea of this course was to taste three exotic wines, to open consumers to the diverse possibilities beyond the usual grapes like Chardonnay and Cabernet Sauvignon.  That is certainly a sentiment I embrace and encourage.  The wines included: 1999 Lopez de Heredia Rioja Blanco Crianza "Gravonia" from Spain, 2007 Buscaretto LaCrima Di Moro d'Alba from Italy and 2008 Kanonkop Kadette, a South African blend of Pinotage, Cabernet Sauvignon, Merlot and Cabernet Franc. I really enjoyed the first two, but the third was too vegetal for my tastes.  Though I have liked the Kadette before, so it might just be a vintage issue.

So my journey to the Wine Riot was a fruitful expedition.  If you went to the Wine Riot, what were some of your special discoveries?
Posted by Richard Auffrey at 9:12 AM

I should have tweeted you and arranged to meet up. I just updated my wine riot post with a link to yours. We covered some of the same stuff and your article has a lot more detail and some awesome pictures that I would love my readers to see.

I think this is right..you are great....keep post..click here for the Repair Service
Fridge Repair in Noida

What a smashing information. Doing a great job. god bless you.
Refrigerator repair in noida

Nice post.. i am looking for the such unique content..keep posting.
whirlpool Fridge Repair in Noida

Very informative post! There is a lot of information here that can help any business get started with a successful social networking campaign.

Well this is extremely fascinating indeed. Would like to read just a little more of this. Excellent post. Thanks for the heads-up...This blog was really insightful and knowledgeable.

This is very useful article. we are giving the repair service.By the way, Thank you for sharing with us, and we sincerely hope you will continue to update or post other articles

I really Impressed with the post. because comntains the meaningful information.
best reiki healing in india