How To Pair Port With Dinner 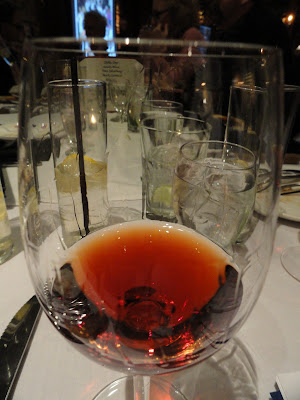 Two classic pairings but which apparently have also relegated Port to being paired primarily with dessert or as an after-dinner drink. Yet that was not always the case and during the late 19th and early 20th centuries, sweet wines of all types, including Port, often were paired throughout an entire dinner. But that fell out of fashion. Personally, I generally had not given much thought to Port accompanying an appetizer or entree. But, the more I considered it, the more I was intrigued by the idea so I was eager to attend a local dinner where every course was accompanied by a different Port.

Legal Sea Foods recently hosted a five-course Port dinner in the Wine Cellar of their Park Square location. Sandy Block, Master of Wine and VP of Beverage Operations, and Tina Silverberg, Sommelier, were in attendance and led the discussion on Port, including showing some photos of the Douro region which Tina had visited during the last harvest. Sandy has also been to Portugal numerous times so together they brought plenty of Port knowledge to the dinner. The Port pairings were carefully considered and I eagerly anticipated testing the results.

In a very simple generalization, pairing wine with food can be done in either of two ways: matching or contrasting the flavors. For this Port dinner, they generally chose to adhere to the matching method, to try to pair foods with flavors that mirrored those of the Ports. A contrasting pairing with the Ports would have been a valid match as well, but that is beyond the scope of this post. For now, let us consider whether matching Port flavors to food works or not.

The dinner began with a few delicious Hors d'Oeuvres, which generally presented salty flavors with elements of smoke, sweetness and blue cheese. 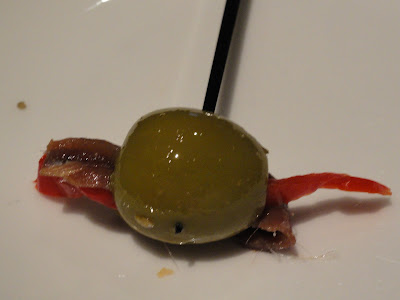 A Stuffed Olive with Anchovy and Piquillo Pepper. 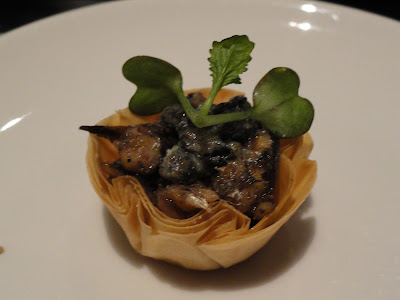 Grilled Sardines with Cabrales Blue Cheese in a Phyllo Tartlette. My favorite of the three, with its brininess up front and the sharp blue cheese finish. 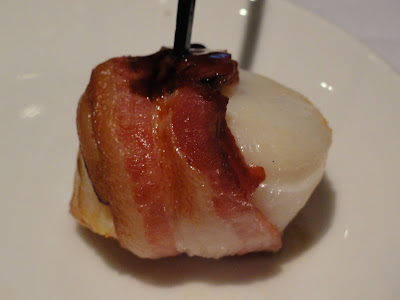 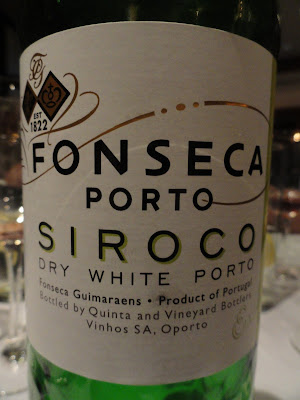 These hors d'oeuvres were paired with a Fonseca Siroco White Port ($16.99) & Tonic, a popular cocktail in the hot Douro region. In a tall glass on the rocks, with a lemon slice, it was reminiscent of a vodka & tonic, but with more citrus flavors and a slight nuttiness. White Port is made in two styles, either dry or sweet, and the sweet version may be known as the Lagrima style. The Fonseca Siroco is a dry style and I would have liked to taste it on its own. But, it did well in the cocktail, and would be very refreshing in the summer. It went well with the hors d'oeuvres, helping to cleanse the palate. I think people need to drink more White Port. 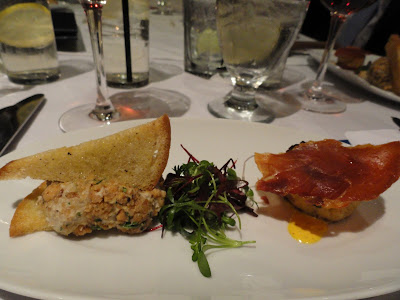 Next up on the menu was Fish Two Ways, which included a Bluefish Paté with marcona almonds & grilled crostini, as well as Cod Cakes with Serrano ham & a saffron aioli. The Paté was superb, creamy and flavorful with salty and nutty elements. I would love to make that at home for a party sometime. The Cod Cakes were moist and tasty, and the ham was very crispy, adding a salty aspect as well.

With this seafood, we drank the Fonseca 20 Year Tawny Port ($49.99), which was served at cellar temperature (about 55-58 degrees Fahrenheit), not room temperature. The idea with this pairing was to match the nutty and salty flavors of the Port to the seafood. The wood aging of this Port made its color lighter, more of an amber than the purple shade of many young Ports. It had an alluring aroma and plenty of complexity on the palate, with flavors of caramel, almonds, raisins, and spice. It was silky smooth with very mild tannins and a lingering finish. A superb Port.

The Port's sweetness was also very subdued, and it reminded me in some ways of an aged Oloroso sherry. Different Port producers have varied house styles, and the level of sweetness of their Ports will vary, generally determined by the timing when the neutral brandy is added to the fermentation process. I felt this was a successful pairing, indicating one way in which a Port can be matched to seafood dishes, and the flavors of the food and wine complemented each other so very well. It certainly might not be your first choice for a seafood pairing, but it would make for an interesting change of pace and could impress your guests. 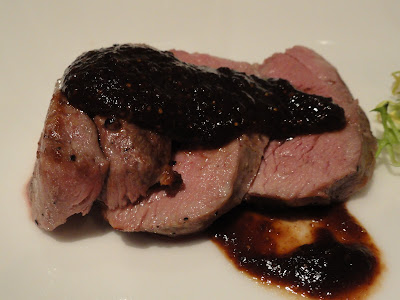 We moved on to a savory Grilled Duck Breast with a Black Mission Fig Glaze, tender slices of meaty duck with a thick, sweet glaze possessed of a dominant fig taste. Duck often is served with a fruit sauce or glaze, and the idea behind this pairing was to match the sweetness of the fig glaze to the Port's sweetness. I would have preferred the fig glaze to be a bit less sweet but it was easy enough to cover the duck slices with as much, or as little, of the glaze as you desired. 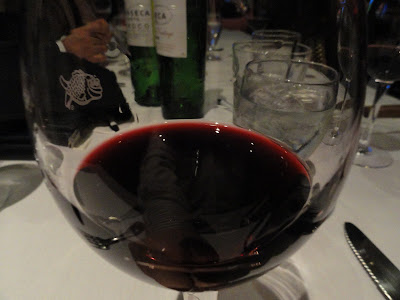 The pairing for this dish was the Croft 10 Year Tawny Port ($26.99) and Croft is the oldest still existing Port House. This Port was a bit darker in color than the previous Fonseca, with a similar aroma though with a bit more dominant fruit. It felt bigger and fuller in the mouth, with more sweetness though it still was at a mild level. The flavors were complex, with subtle nuttiness, and the tannins were slightly more prominent. The ten additional years of aging of the Fonseca do make a difference. This pairing also worked for me, and I think the combination of the sweet glaze and sweetness of the Port complemented each other. What helped was that the Port was not overly sweet, and I would now consider pairing Ports with sweet dishes. 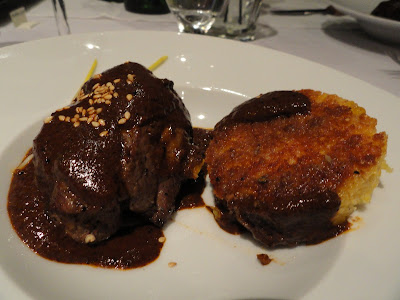 The last savory course was Hickory Wood-Grilled Lamb Shoulder with Mole Poblano and Grilled Corn Cakes. Mole Poblano, which is of Mexican origin, contains numerous ingredients, including chile peppers, nuts and chocolate. The pairing idea was that as Port and chocolate are considered a good match, then the chocolate in the mole would make a match too. The lamb was tender with that distinctive and delicious taste of lamb. The mole was a rich sauce that complemented the slight gamey nature of the lamb, and it was more earthy and savory, rather than spicy so they must have been light with the chile peppers. 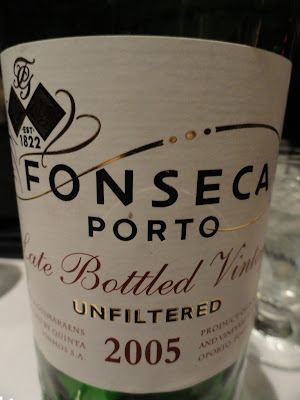 The Fonseca Late Bottled Vintage Port 2005 ($22.99) is a traditional style, meaning it is unfiltered. Taylor Fladgate developed the Late Bottled Vintage (LBV) style in the 1950s, trying to create a vintage style Port you could drink young. So, basically a LBV contains grapes from only a single vintage but it is not a declared vintage Port. Yes, it seems a bit confusing so just remember that a LBV is good to drink young, and usually is less expensive than a Vintage Port. This Fonseca had a dark and opaque purple color with a nose dominated by black fruits. It was full bodied, with stronger tannins and powerful flavors of black fruits and raisins. It was also sweeter than all of the previous Ports.

Once again, this was a nice pairing, with the Port flavors going well with the rich mole sauce and its chocolate flavors. I think the pairing might have even be better if the mole had more spiciness, as the Port's sweetness would have been a good contrast. As mole is a versatile sauce, I could see other dishes using mole also pairing well with Ports. 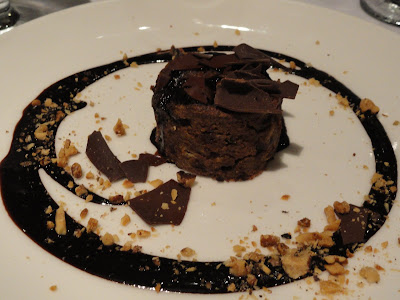 For dessert, they went with a classic pairing, Port and Chocolate. We were served a Warm Chocolate Pudding Cake with roasted walnuts and a Colombian dark chocolate sauce. The cake was fluffy and light, with plenty of rich chocolate flavor that was accented nicely with the salt from the walnuts. A chocolate lover's treasure.

The final port of the evening was the Taylor Fladgate Vintage Port 2000, which is just starting to come into its own and will continue to age for many years to come. It was a dark purple in color, though lighter at the edges. It had more black fruit aromas which also came out prominently on the palate, along with raisins and subtle spices. 2000 was considered a "magical" vintage, one of the best in recent times. It was an elegant Port, with a long and satisfying finish.  Taylor is considered the "Latour" of the Douro, producing classic Ports. With the chocolate, it enhanced the experience, a fine ending to a delicious dinner.

I was pleased to see how Port could pair with more than chocolate and blue cheese, and it gave me much to ponder. Food and wine pairing can be an art and it is always interesting to try something different from the norm. Not enough Port is consumed in the U.S., but if more people learn how to pair meals with Port, maybe that will change. If you have paired Port with dinner, please tell me about the pairing in the comments.
Posted by Richard Auffrey at 4:00 AM

Great article. I always struggle with port and blue cheese as a wine / food pairing and prefer to drink port on its own at the ends of a meal. Two very interesting pairings I have had recently have been high quality (70% cocoa solids or more) dark chocolate and young LBV. I tried with Niepoort 2007 LBV and the combination is fantastic, the chocolate really empahasises the red fruit, particularly cherry / kirsch flavours in the Port. The other pairing I have tried a couple of times is, this was a tip from Dirk Niepoort himself, young vintage port (a couple of years from vintage) and a really thick peppered steak. It works very well.

Thanks very much Dominic for your comments and contribution. The steak pairing is very intriguing.

I wonder if you could provide the name of the chef(s) of the food at this pairing. All of the food looked very good. I am especially interested in the mole poblano and grilled corn cakes.

Sorry, I don't have the name of the chef but if you contact the restaurant I am sure they can tell you.