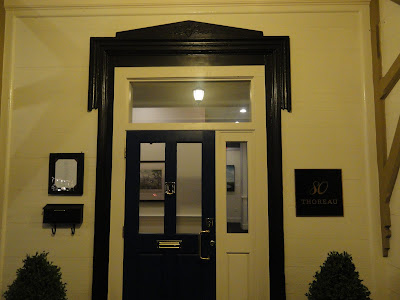 Along Thoreau Street in Concord, there are numerous places which will appeal to a food and wine lover, including La Provence, Bedford Farms Ice Cream, Concord Prime, and Concord Provisions. It can be a fun and tasty way to spend an afternoon. There is also a new addition to this gourmet mecca, 80 Thoreau, a "New American cuisine" restaurant located on the second floor of the Concord Depot. Opened in April 2011, it will celebrate its first anniversary next month.

I recently attended a blogger dinner at 80 Thoreau, and got to meet both owners, Ian Calhoun and Vincent Vela, who met and became friends while they both were attending Cornell University's School of Hotel Administration. Both spent time being educated and trained in the restaurant industry. For example, Ian traveled to Paris for training at Le Cordon Bleu and even attended Harvard Business School, with a future goal of opening a restaurant. Vincent worked in New York City at both the famous Per Se as well as the lauded Craft. Together, they eventually united to create their own restaurant. 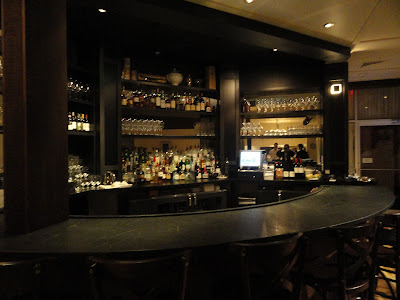 After ascending the stairs from street level, you will find yourself in a restaurant with a modern and elegant decor, though there is still a casual ambiance that exudes throughout, especially in the bar region. The restaurant is open for dinner from Monday through Saturday. There are two separate dining areas, one with a bar and the other near the open kitchen, and the entire restaurant can seat about 90 people in total. The front dining area and bar is probably better for socializing while the rear dining area might be better for more intimate dinners.

If you are at the bar, they also have a separate menu of Bar Bites (mostly $4-$6), small plates including items like, Marinated Olives, Brandade Fritters, Duck Liver Pâté and Caulflower Fritters. In addition, there is a small menu of Bar Plates ($14-$15), more full entrees such as Pan Roasted Ocean Perch, Crispy Duck Confit and the 80 Thoreau Burger & Fries. 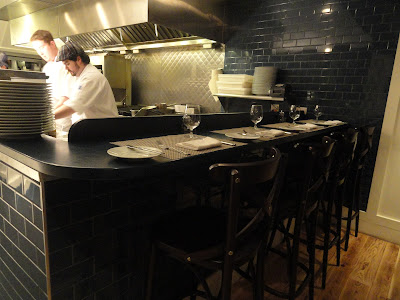 I love open kitchens, as to me, it shows the confidence of the chef and kitchen staff, their willingness to be under the close scrutiny of their customers. Their Chef's Counter, directly facing that kitchen, has four stools, and you have an intimate view into their cooking and preparation. Chef Carolyn Johnston, formerly of Rialto, Icarus and Salamander, presides over the kitchen, and has composed a menu of "New American cuisine," combining New England ingredients and traditions with French techniques. 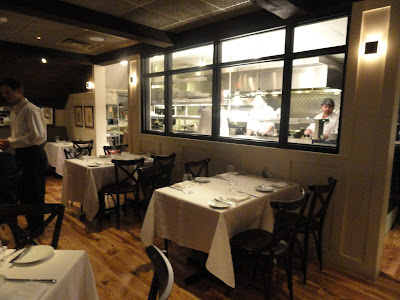 The food menu is small but diverse, and I think it reaches the right balance, not overwhelming customers with choices but providing enough different dishes to appeal to almost any preference. I much prefer a menu of small, well-done dishes, than a large menu that is hit or miss. The 80 Thoreau menu, which changes frequently, currently has 7 First Courses ($8-$15), ranging from Scallop Crudo to Roasted Squash Salad, and 8 Main Courses ($18-$29), ranging from Roasted Sweet Potato Tart to a Grilled Ribeye. A number of the ingredients are sourced locally, which is always a positive. The prices seem reasonable, considering the quantity and quality of the dishes. 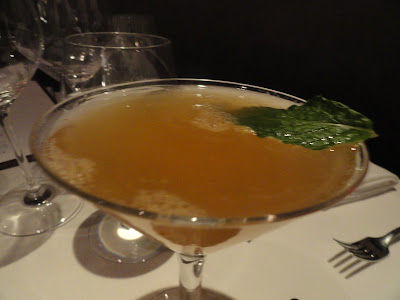 The restaurant has a full liquor license, serving wine, beer and cocktails. As for cocktails, they have a special list of seven, each reasonably priced at $10 each. Pictured above, I selected the El Guajiro, a mix of their House Spiced Rum, Cava, and Lime. I enjoyed this drink, with its savory spices, slight tartness and light effervescence. They are also well known for their Tonic & Gin, which uses their House Made Tonic, Junipero Gino, and Lime. Though I did not taste it, the others at the table who ordered them seemed to really like the cocktail. As for their beers, their list includes a number of beers bottled in Massachusetts.

Their wine list greatly appeals to the wine geek in me, except I am not crazy about their pricing, a common problem with many restaurants. The list has 7 wines ($8-$12) by the glass, from Cava to Spanish Monastrell, though I would like to see a few more choices. By the bottle, there are over 60 choices, including about 5 Sparkling wines, 19 Whites, 3 Rosés, and 35 Reds, as well about 20 half bottles available. This list is very diverse, with plenty of excellent choices, from Grower Champagne by Pierre Gimonnet to a killer Tavel Rosé by Prieure de Montezargues, from the amazing Chateau La Nerthe Chateauneuf-du-Pape Rouge to the tasty Terre Rare Riserva Carignano del Sulcis. It is obvious that great care and a discerning palate developed this intriguing wine list.

In many cases, the wine prices range from $28-$60, though there are exceptions. My only issue is with their pricing, which generally runs 2-3 times the usual retail. It is very difficult to pay $60 for a wine, like the above mentioned Tavel Rosé, which I know retails for around $20, no matter how good the wine may be. And it is those wines, which cost roughly three times the usual retail, which most bother me. I have heard the arguments for such a drastic mark-up, but still am not convinced.

In addition to the regular wine list, there is a Reserve Wine List with over 20 choices, all but four being red, and priced from $90-$1000. The choices are mostly French, but with a few Barolo, California Cabernet and others. There is also a small list of After Dinner Drinks, including Single Malt Scotch, Brandy, Port, Sherry, and Sauterne. 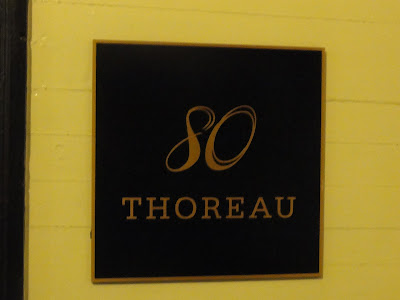 We began our meal with a few items from the Bar Bites menu, including Marinated Olives, Duck Liver Pâté and Gougeres. I especially enjoyed the Pâté, with its creamy texture and earthy taste, a delightful savory start. I was less impressed with the Gougeres, and I am usually a big fan of such, but I found these to be a bit too heavy and chewy, not the light, crisp gougeres I prefer. 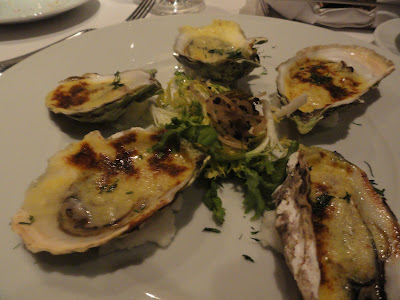 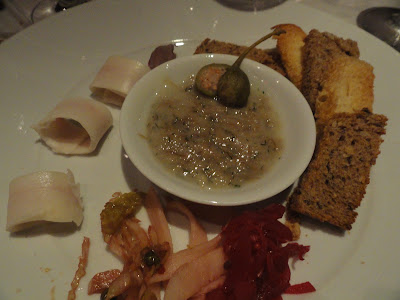 Before several first courses were delivered, we were poured a glass of the 2010 Nasiakos Moschofilero ($9/glass, $38/bottle), a delicious Greek wine that reminded me a little of Sauvignon Blanc, with nice crisp, citrus notes and hints of grassiness.

The Broiled Oysters ($15) with Saffron Champagne Sabayon were excellent, an intriguing blend of flavors, including the brininess of the oysters with buttery notes, hints of saffron and other savory notes. And after enjoying the oyster, I dripped the rest of the sauce in the shell upon a slice of bread (which they obtain from Iggy's Breads).

The Pork Rilettes & Lardo ($11), with pickles, house mustard, and toast were another good representation of their charcuterie skills, like the duck liver pâté. Creamy, spiced just right, with a bounty of savoriness, it was another winning dish. And who can resist the allure of slices of lardo? 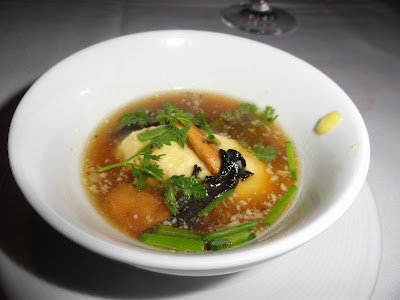 Next up, we were served a bowl of Wild Mushroom Consomme ($10), with celeriac, parmesan custard, and an herb salad. As there is a little chicken broth in this consomme, it is not a vegetarian option but everyone else is likely to enjoy it. It had a nice depth of flavor, with a variety of mushrooms, and the custard was a pleasant addition, adding a touch of creaminess. 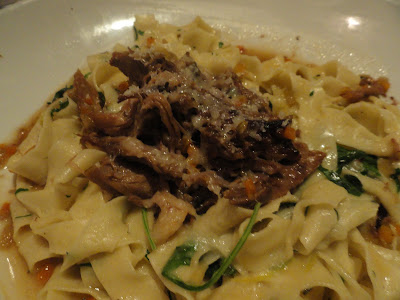 We had our choice of entree, and accompanying this choice was a glass of the 2009 Domaine La Berangeraie Cuvee Maurin Cahors ($42/bottle), an appealing French wine made from 100% Malbec. It had mild tannins, and tasty black fruit flavors accented by hints of black pepper and spices. A smooth, enjoyable wine with plenty of complexity.

I pondered a bit over which entree to order. The Roasted Sweet Potato Tart sounded intriguing, but wasn't sure it would be sufficient as an entree for me, though another of my dining companions ordered it. It looked impressive, and she was quite taken with its taste. The Grilled Quails were something else I considered but ultimately I decided on another option. Someone else did order the quail, and he all but ate the bones, reveling in the tasty meat, with a nice char on the skin. The Poached Haddock dish also looked quite good.

My decision was for the Tagliatelle with Lamb Ragu ($23), with fennel, juniper and black olives (though I had them leave out the olives for me). The pasta is made in house, and it was quite good, cooked to the just right firmness, and topped by what appeared to be a very little tomato broth. There was a large mound of shredded lamb atop the pasta, moist and flavorful meat, with that distinctive lamb taste which I relish. I was very pleased with my choice.

For dessert, there are five options on their menu, and we got to taste four of them, all except the Local Cheese Selection ($12). The four dishes we did taste included: Chocolate Parfait (mousse, cake, caramel pastry cream, $9), Seasonal Sorbet (Raspberry Sorbet with Limoncello, $5), Lemon Duet (icebox pie, angel food, $8) and Ricotta Cake (figs, pistachios, vanilla ice cream, $9). The Sorbet was very good, with a rich raspberry flavor and hints of lemon, and the Chocolate Parfait was good, though overall, I would have preferred the cheese plate, as I recently wrote about.

Service was excellent and overall I had a very good experience at 80 Thoreau. It is a nice addition to the culinary scene in Concord and worthy of a stop. My main concern is with their wine pricing, which partially mars what otherwise is an excellent and diverse wine list. Though I will note that I am currently discussing the issue of their wine prices with Vincent. Come visit Thoreau Street and check out 80 Thoreau.