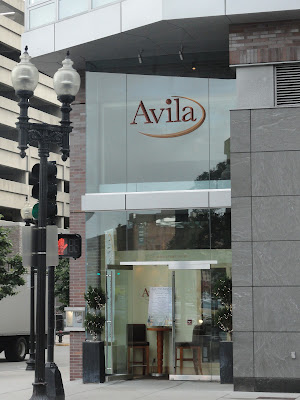 “There is no such thing as a bad whisky. Some whiskies just happen to be better than others.”
--William Faulkner

It is easy to find wine dinners but spirit-paired dinners are still a rarity, despite the fact that high quality, artisan spirits are now a hot category. Whiskey is seeing a resurgence, partially due to the emergence of flavored whiskey but also because the overall quality of whiskey seems to be improving as well. The relatively new practice of double maturation, finishing the aging of whiskey in a second type of barrel (often a wine barrel), has also helped increase its popularity. This double maturation can add some intriguing and appealing flavors to the whiskey.

Whiskey should be more than a spirit simply for an apertif or an after-dinner drink. Whiskey can pair well with food and more chefs need to avail themselves of such an opportunity. One local chef picked up that gauntlet, creating a menu paired with five scotches, and he succeeded in designing a well crafted menu that paired very well with the various scotches.

I recently attended, as a media guest, a Glenmorangie Scotch dinner at Avila Modern Mediterranean restaurant in Boston. George Kalliavas, John Carey and Danielle Keating of Martignetti Companies, the Moet Hennessey division, presided over the dinner and Eamon Keating, from the Boston Wine Exchange was also present, taking orders for the scotch. It was a fun and educational dinner, showcasing the versatility and quality of the Glenmorangie scotch portfolio. 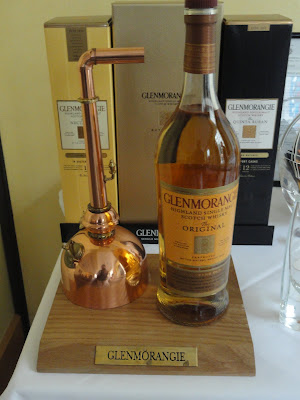 The Glenmorangie Distillery is located north of Inverness, about half a mile from Tain, in the Highlands of Scotland and it is the smallest distillery in the Highlands. It was founded in 1843 by a farmer, William Matheson, who bought a couple of ex-gin stills in England to start producing scotch. These stills were over 16 feet tall, the tallest in Scotland, and the distillery now possess 24 stills. The height provides a higher distillate, which ends up being lighter and smoother than some smaller stills. The distillery is now owned by Moet Hennessey.

Glenmorangie possesses their own water source, the Tarlogie Springs, including approximately 100 acres around it, to ensure the purity and quality of their water. Their barley is sourced only from Scotland. It is important to realize that the oak barrel is one of the most significant aspects of whiskey production, providing 60%-70% of the flavor and all of the color. Glenmorangie contracts with loggers in the Ozark Mountains for American white oak and then have barrels constructed from the finest wood. They then lend the barrels to two American bourbon and whiskey distilleries for aging. After the barrels are used, they are then disassembled and sent to Scotland, to be reassembled and used to age Glenmorangie. They only use their barrels twice, as opposed to some other distilleries which may use them five or six times.

The Master Distiller at Glenmorangie is Dr. Bill Lumsden, a pioneer in the use of double maturation and the distillery is also well known for its experimentation. Their tagline is "unnecessarily well made," and it is my experience that they produce high quality scotch, with a diverse flavor profile. George stated that "Glenmorangie is a gateway drug to single malt scotch."  It is a lighter, ethereal, and layered scotch which is more consumer friendly than some other scotches, especially the peaty versions. Yet is is far from simple, indicating the complexity and flavors possible within single malt scotch. In addition, it is very food friendly, making it an excellent choice for these types of dinners. 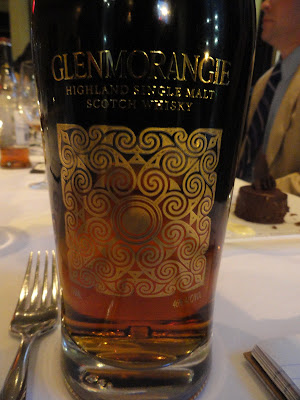 The signet found on every bottle of Glenmorangie has its roots in the ancient past. At the end of the 8th century, the native Picts carved a huge stone, the Cadboll Stone, which eventually became the oldest recorded archaelogical find in Scotland. Though the Stone was eventually relocated to the National Museum in Scotland, Glenmorangie commissioned a stone replica which was eventually placed on its original location. The signet on their bottles is one of the carvings on this Stone.

For the last 49 years, Glenmorangie has been the top selling selling single malt in Scotland. Currently, the top market for Glenmorangie is Japan, with Canada and the U.S. essentially tied for second and third place. Within the U.S., New Jersey is their top market, making me curious as to why they drink so much of their scotch. I would never have guessed that was the largest U.S. market. Metro New York and Los Angeles are the next two largest markets and Massachusetts ranks around fourth or fifth place, though it has also seen 40% growth in recent years. Information on their production statistics as well as the number of barrels was not available, and not something the distillery generally shares.

The greatest challenge facing Glenmorangie is  handling the competition, trying to expose more consumers to their products. Glenmorangie produces about ten different Scotches, including some limited editions. For example, one of their limited editions is the Artein, which is finished in Super Tuscan barrels from the renowned Sassacaia. It is illegal in the U.S. to place the name of Sassacaia on the bottle label, but in Europe they are able to do so. 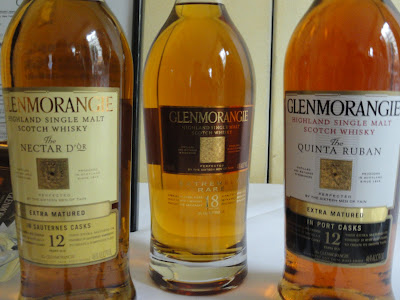 Our evening began with a couple passed appetizers, including a shot glass of Creamy Corn Soup, with coriander & a brioche crouton, and Goat Cheese Croquettes. The corn soup was extremely creamy and flavorful, and I wished I had been given a large bowl. The croquettes were also excellent, with a light, crispy outer coating and silky goat cheese inside. This culinary start boded well for the rest of the dinner.

Our first pairing was the Nectar D'Or ($67), which spends 10 years in white oak and then another 2 years in old Sauternes barrels. Sauternes is a lauded sweet wine from France, and the grapes were affected by botrytis, the "noble rot." They are probably the only distillery to regularly produce such a unique scotch. With a light golden color, this scotch was smooth with intense flavors of honey, butterscotch, citrus and spice. There was a very restrained sweetness which enhanced this exquisite scotch and it paired well with the creaminess of the appetizers. 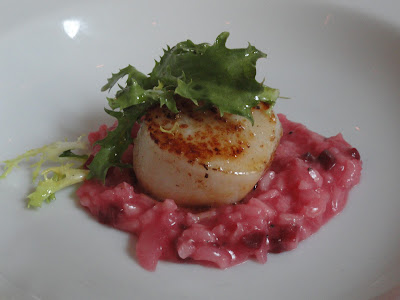 The first course of the evening was a Brown Butter Seared Sea Scallop with red beet juice risotto and frisee. The tender, well seared scallop was pleasing and the risotto combined a mild earthiness with a sweet tinge. The pairing for this dish was The Original ($35), their entry level scotch which is aged for ten years in used bourbon casks. Smooth, light and elegant, this make a great introduction to single malt, and its flavors, a combination of citrus, white stone fruits and vanilla notes, will appeal to many. This scotch would pair well with many different seafood dishes, or even a light chicken dish. 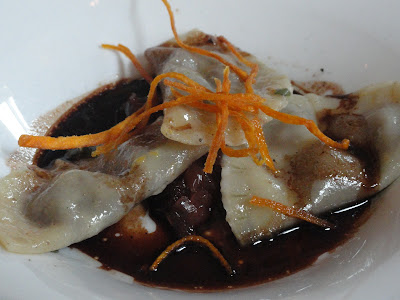 The next course was a clear winner, Chicken Liver Ravioli with dried cherry red onion compote, Chianti, and a Balsamic reduction. The thin pasta was cooked perfectly, just al dente enough, and the earthy taste of the chicken liver was well balanced by the sweetness of the compote and sauce. The third scotch was the  Quinta Ruban ($50), which is aged for ten years in used bourbon barrels and then two years in ruby port pipes. It possessed a deeper and complex flavor, with notes of citrus, honey, spice, leather, and a subtle red fruit note, as well as a lengthy, satisfying finish. It was able to handle the earthiness of this dish, balancing it with a mild sweetness. Another winning combination. 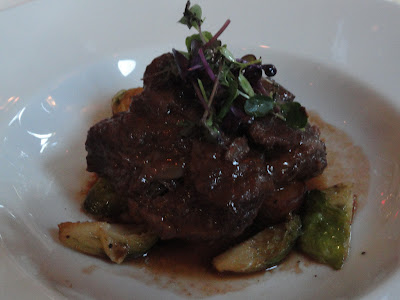 The Braised Wagyu Beef Cheeks, with brussel sprouts and fingerling potatoes, was a good-sized piece of extremely tender meat, that easily fell apart with my fork alone. A rich and smooth taste, the beef satisfied my inner carnivore. The scotch for this dish was the 18 Year Old Glenmorangie ($95), which spends about 15 years in used bourbon barrels and then 30% spends an additional 3 years in Spanish Oloroso sherry casks, after which it is all blended back together. With a darker gold color, this was an amazing scotch, smooth, complex, and well layered with a compelling melange of dried fruits, honey, figs and caramel. It worked well with the beef, complementing its taste. A killer scotch! 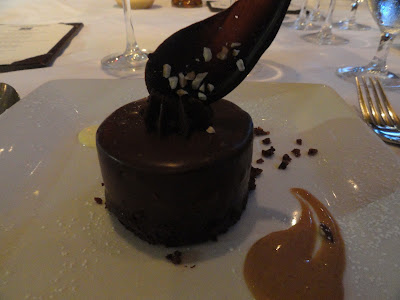 Our dessert course was a Manjhari Chocolate Mousse Cake with hazelnut creme, a rich and creamy dish with touches of salt and citrus. Would you think of chocolate and scotch? Well it certainly can work, if you have the right scotch. Our final selection was the Signet ($200), a unique blend of older whiskey, most over 30 years old and the youngest being 20 years old. Master Distiller Lumsden has always loved coffee and that is reflected in this scotch. Though some of the details of its production are secret, it is known that they use a high roast chocolate barley, dried in a coffee roaster. With a very alluring aroma, this scotch does possess a compelling blend of coffee and chocolate flavors, with hints of orange, spice, and brininess. And it worked well with the chocolate.

Many of the attendees seemed to favor the Signet above the others of the night, though my personal favorite is probably the 18 Year Old. I certainly enjoyed the Signet very much, but it would be more of a scotch for specific occasions rather than a more every day choice. I liked all five of the scotches and found how food friendly they are, thanks to a compelling menu showcasing the versatility of the scotch. Let us see more spirit-paired dinners and I challenge local chefs to try to create some menus, with scotch, tequila, rum or any other spirit.

If you enjoy Scotch, or want to learn more about it, then a great option is to seek out the portfolio of Glenmorangie Scotch. And check out Avila, which put together an excellent menu of delicious cuisine.

I've been lucky enough to have tasted all but the Signet and can attest to the pleasure of the different aging treatments from the same producer. My dad is a scotch guy and when I roll in with something new had and play like kids who know their parents aren't looking.

I've got a bottle of the Shackleton recreation that there was a Nat Geo story about. Yes we cracked it, and it is totally worth the try to get a feel for the blend and style that went to Antarctica over 100 years ago.