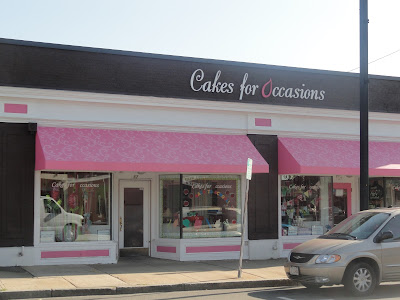 You either have to be confident or crazy to invite me to your bakery to taste your cupcakes.

I have often ranted about the over saturation of cupcake stores, hoping for some other dessert to take the spotlight. I have complained about the large number of places that sell dry cupcakes with thick, overly sweet frosting. I have high standards and have found many popular cupcake stores to be lacking. Inviting me to check out your cupcakes is a risky endeavor.

Last week, a bakery stepped up to the plate. I was invited to check out Cupcakes After 5, "shot-size mini cupcakes inspired by classic cocktails and infused with alcohol," which are created by Cakes for Occasions in Danvers. A cupcake cocktail? Yes, I was intrigued so decided to check them out and put them to the test. I also wanted to determine whether they were confident or crazy. 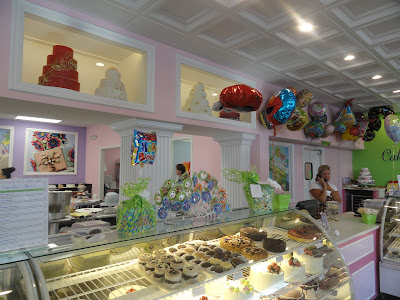 Cakes for Occasions, which has been around for over 10 years, is a "nut-free, boutique-style gourmet cake and pastry shop" and their main business seems to be cake design. The owner is Kelly Delaney who was educated at the Ballymaloe Cookery School in Ireland and the Cordon Bleu in London. She began her business using a single oven in her mother's home and now employs almost 30 people and produces over 700 wedding cakes each year. Throughout the years, Kelly has received many accolades, both local and national, and currently ships her products throughout the continental U.S.

The Danvers location is fairly large and festively decorated with lots of bright colors, balloons, and party supplies. There are several glass cases of various cakes, pastries and baked goods, presenting many enticing choices. In the back, there is a large kitchen area where you can watch some of the pastry chefs preparing cakes and other delights. 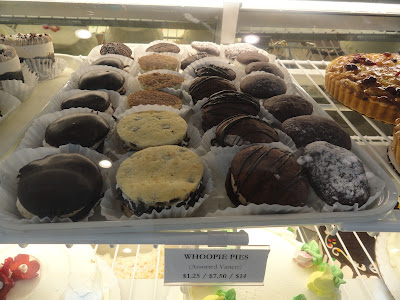 Mini-Whoopie Pies! I was certainly pleased to see these in the case. They come in a variety of flavors and at only $1.25 each, I think they are fairly priced as well. I got to try a couple and they were very good, with a creamy filling and moist chocolate cake, the type of whoopie pie sure to please any dessert lover. 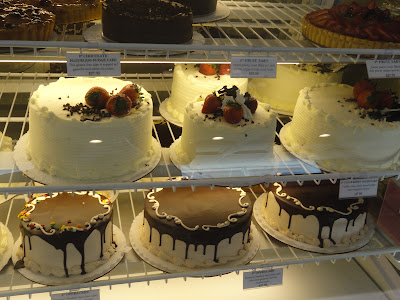 Some cakes, in various sizes, that were ready to be bought, from Opera Cakes to Strawberry Short Cake. 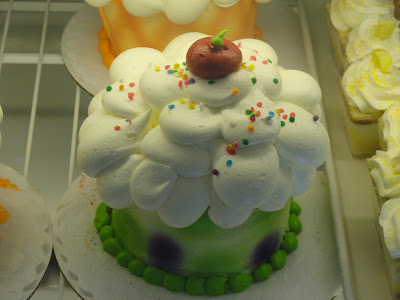 The Big Cupcake Cake, available in chocolate, vanilla or marble. 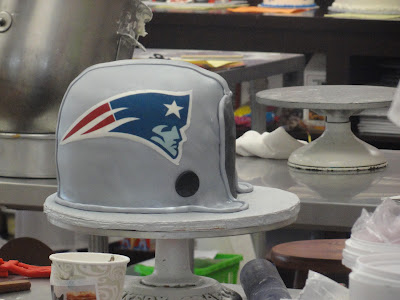 A New England Patriots helmet cake that was being created while I was at the bakery. 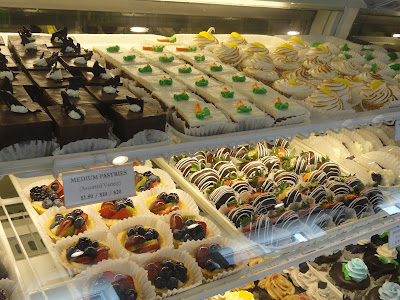 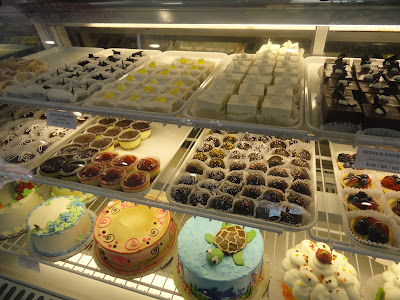 Some of the other enticing pastries, including European pastries and tarts, that can be found here. 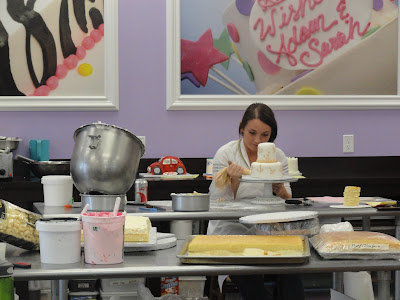 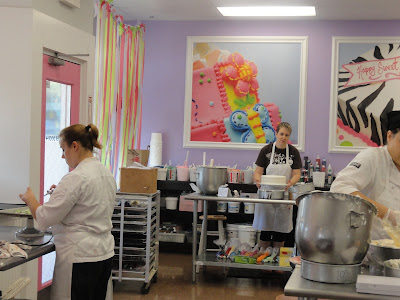 Some of the pastry chefs hard at work in creating cakes and other pastries. You can watch them while you decide what pastries you want to purchase. 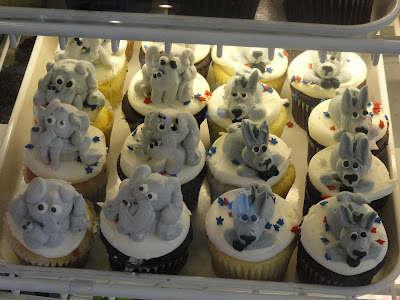 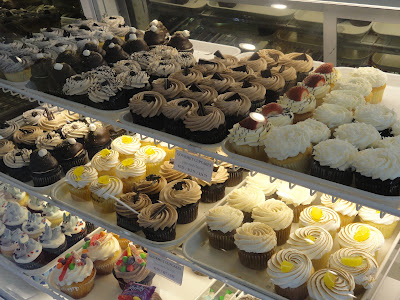 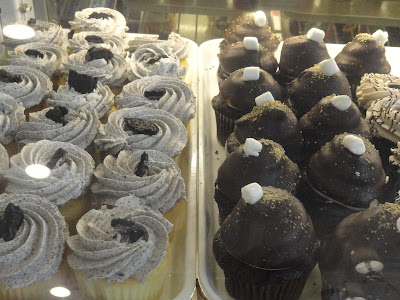 They produce a wide range of cupcakes, generally priced $2.25 to $2.95 each, which is better pricing than many of the gourmet cupcake stores that are charging over $3 for their cupcakes. For the political campaign season, you can see above the Elephant (Republicans) and Donkey (Democrats) cupcakes. 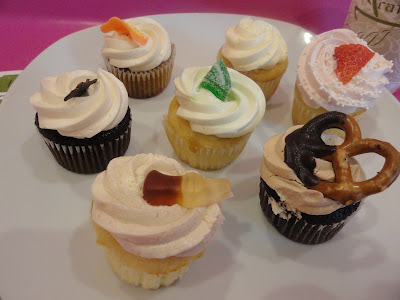 I was there for a special cupcake, the Cupcakes After 5, and General Manager Jennifer Brennan answered my questions about these new cupcakes. At a networking event, the owner Kelly spoke to some people from Patron Tequila, and the idea was tossed out of using tequila in desserts. This planted the seed of an idea, and they were inspired to create a more adult cupcake using various alcohols. As their bridal coordinator is also a bartender, they certainly did not lack for ideas.

The cupcakes come in two ways, as a mini-cupcake or in a plastic "shot glass." The shot glass idea is aesthetically very cool looking, but you really need a fork to eat it. The mini cupcake requires no utensils, just peel off the wrapper and eat. So you can either go for fancy or practical, dependent on your desires. The fancy might be more appropriate for a party or when you want to impress. The cupcakes come in at least 8 flavors, and they have plans to add more, including some seasonal ones. Each cupcake is essentially intended to replicate the flavors of a cocktail or alcohol, from the Kahlua Mudslide to the Mimosa.

I tasted 7 of the flavors, pictured above, which included Rum & Coke, Sam Adams Cream Stout, Champagne & Strawberries, Mimosa, Caramel Appletini, Bailey's Irish Cream, and Key Lime Mojito. For me, the taste test was a two step process, to assess them first as a cupcake and then to assess the effect of the alcohol.

All of the cupcakes passed the first test with flying colors. They were all properly moist and the frosting was light and creamy. They did not possess either of the usual two flaws. Each cupcake was very flavorful, representing the basic flavor profile of the cocktail they were trying to emulate. Frankly, they were some of the tastiest cupcakes I have had in quite a while. So, my invite to check out their cupcakes was definitely confidence on their part.

Now on to the second test. Baking with alcohol is not an easy task, especially as you generally want a proper balance. You want to be able to taste the alcohol but you don't want it to overwhelm. You don't want too little or too much. As these cocktail cupcakes are still a new product at the bakery, they are still working on attaining that balance with all of their cupcakes.

Of the seven cupcakes I tasted, three succeeded in achieving that right balance: Rum & Coke, Sam Adams Cream Stout, and the Bailey's Irish Cream. The Rum & Coke, a vanilla cupcake soaked with Rum, topped with Coca Cola buttercream and garnished with a sugar line candy, was my favorite of the seven. Great flavors, well balanced, and addictive. The Bailey's Irish Cream, a chocolate cupcake soaked with Bailey's, filled with chocolate ganache and topped with Bailey's white chocolate buttercream, was a close second.

The other four cupcakes did not possess enough alcohol flavor, which could be due to the nature of the alcohol used. For example, the Champagne & Strawberries had delicious strawberry flavors but you really couldn't detect the Champagne. I enjoyed the taste of the Caramel Appletini, an apple cupcake soaked with vodka, filled with caramel and topped with a caramel-vodka buttercream, but the vodka didn't really come out. The lighter flavored liquors, such as vodka or sparkling wine, may not show as well in such an arena. Or maybe more needs to be added. You might instead need stronger flavored drinks, like Port or Zinfandel, to show well in cupcakes. A Port & chocolate cupcake? Port & blue cheese cupcake?

I intend to return to the bakery, to check out more of their pastries. Their cupcakes receive my recommendation, though I think they still need to work on the balance of some of their cocktail cupcakes. They mentioned that parents, picking up a child's birthday cake, may pick up some of the cocktail cupcakes for the adults at the birthday party, which sounds like an excellent idea.

Have you tasted these cocktails cupcakes? If so, what were your thoughts?

Ummnn,, so yummy collection of cakes here. I like all the cakes in the blog. Elephant and donkey cupcakes looks so cute and creative.

All collections of cakes are really yummy and can serve on all occasions.