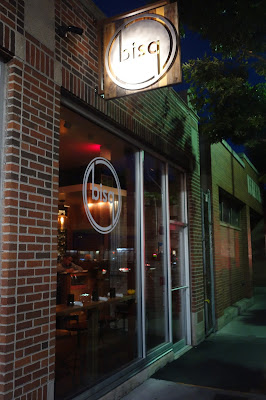 "When a man drinks wine at dinner, he begins to be better pleased with himself."
--Plato

The ancient Greeks had a significant wine culture and you can catch a glimpse of that history in the wines of Greece. Need more motivation? Let me provide you Ten Reasons To Drink Greek Wine, plenty of incentives to be more adventurous and seek out the intriguing and delicious wines of Greece. If you get a chance to drink Greek wines, take it.

BISq, the sister restaurant of Bergamot (which is one of my favorites), held their first wine dinner, a Greek wine event, showcasing the wines of the Parparoussis Winery. I attended as a media guest and it was my first visit to Bisq, and certainly won't be my last. Chef Dan Bazzinotti created a special five-course dinner, with Greek roots, to accompany the Greek wines. In short, Chef Bazzinotti presented plenty of tasty food which paired well with the various wines. 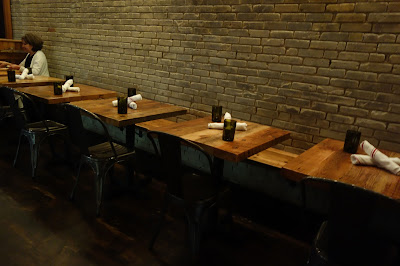 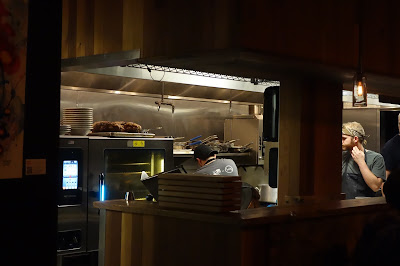 Bisq itself is a small, intimate restaurant with an open kitchen and a small bar in a separate room at the back of the restaurant. It has a fun, casual vibe which should appeal to many diners. It has received some raves and many positive reviews and I understand the allure. 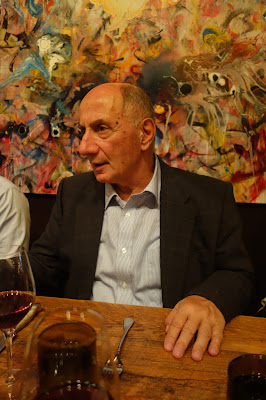 In 1974, the Parparoussis Winery was founded in Achaia by Athanassios (Thanassis) Parparoussis (pictured above). The region of Achaia is located n the northwestern part of the Peloponnese of Greece. The winery is situated in the Bozaitika neighborhood of Patras, the capital city of Achaia. Patras is sometimes called Greece's "Gate to the West" as it is a very busy port for trade to the rest of Europe.

Athanassios studied oenology at the University of Bourgogne in Dijon, France and after graduation worked for a time at Moet & Chandon. When he moved back home to Patras, he decided to start his own winery and initially planted both indigenous grapes and international grapes but in time, he began moving toward primarily indigenous grapes, to promote the uniqueness of these Greek grapes. Currently, the winery owns vineyards at Bozaitika and Movri Achaias and also purchases some grapes from about seven small growers. Their vineyards are planted with about 55% white grapes and 45% red. In addition, they practice organic viticulture, though they are not certified, and use indigenous yeasts.

His father, who is still alive at  106 years old, was originally a spirits distiller and Athanassios said he is "always a happy guy." They still have a distillery on their estate, using it to make their own eau de vie. Athanassios continues to work at the winery and is now helped by two of his daughters, Erifili and Dimitra. Athanassios said that "a winemaker only gets one chance a year to make wine, so he is always experimenting." One of his current experiments is a 100% Assyrtiko, which is more austere and complex.

Athanassios acknowledged that climate change has been in issue, though the summers generally have remained hot and dry. The primary problem is in the fall when it becomes a serious guessing game of when the rains will come. Thus, they need to make careful judgments of when to harvest the grapes to avoid those rains, though there is little they can do to combat this problem. The goal of Athanassios is to produce elegant wines and not "body builders," high alcohol wines.

Though Athanassios spoke little English, it was clear he was personable and passionate, and there were plenty of people at our table able to translate his words. I have deep respect for his philosophy of concentrating on indigenous grapes, especially as Greece has an abundance of such grapes, each with their own unique profile. I also admire that he is still working after forty years at the winery, still enamored with wine making. 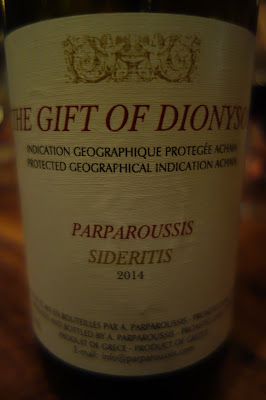 Our first wine of the evening was the 2014 Ta Dora tou Dionyssou ‘The Gifts of Dionysos’ (about $23), one of the most interesting wines of the night. The wine was made from 100% Sideritis, from 25 year old vines. This is a rare Greek grape, one I had not previously tasted. Also known as Himoniatiko and Akaki, it is a late-ripening, pink-skinned grape, and its name derives from the term sidero, which means "iron," possibly because of its minerality or maybe its thick skin.  The winery produces about 25% of all Sideritis wines in Greece and are one of the only ones to make it a varietal wine.

As an aside, it should be noted that many of the soils of their vineyards possess plenty of trace metals, due to a large sulfur eruption centuries ago. The effect is that their wines tend to have a strong minerality to them.

This wine was fermented at low temperatures, has an alcohol content of 12.5%, and only about 1500 cases were made. It does not see any oak, and Athanassios said Sideritis doesn't possess the power to handle oak aging. It was a bright yellow color with some greenish notes and had an alluring aroma of citrus. On the palate, it was very crisp, dry and possessed tasty flavors of citrus and pear with briny and mineral notes. As the Sideritis vineyard is about 5 kilometers from the sea, it picks up a briny element. It would be an excellent seafood wine, from oysters to grilled cod.

The winery also makes Sideritis Rosé and an Eau de Vie with Sideritis, aging it for 12 years in Limousin oak casks (though it is not yet available in the U.S.). 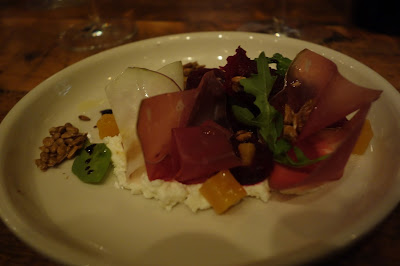 Our first food course was a plate of House-cured Bresaola with salt-roasted beets, kohlrabi, whipped goat feta, & sunflower seed. A pleasing dish of different flavors and textures, especially the salty beef and creamy feta. The Sideritis did well with this dish. 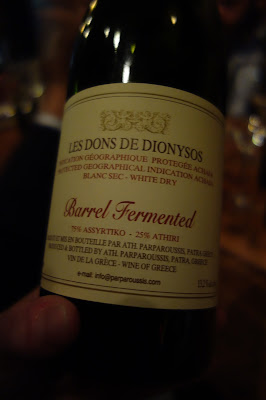 The 2010 Ta Dora tou Dionyssou ‘The Gift of Dionysos’ CAVA (about $27) is a blend of 75% Assyrtiko and 25% Athiri, both from 25 year old vines. It was vinified in new oak barrels and sat sur lie for about 10 months. Only about 12 cases were produced and the wine has an alcohol content of 13.5% ABV. With a bright yellow color, this was a rounder, more full bodied- and complex wine than the Sideritis. With pear, melon and honey notes, there were some subtle spicy elements, a nice minerality and a lengthy finish. Good acidity helps to make this food friendly, and Athanassios said it would work with both seafood and meats. 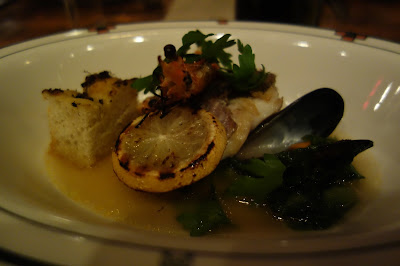 The second courses was Kakavia, a Greek fish soup with cockles, striped bass, whole prawn, and escarole. The broth was compelling and the CAVA was a nice pairing with the fresh seafood. 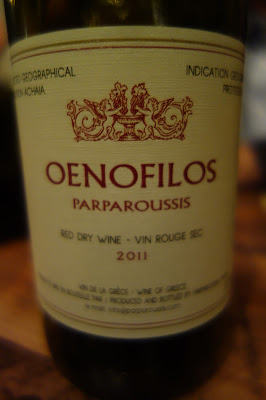 The 2011 Oenofilos (about $26) is a blend of 70% Cabernet Sauvignon & 30% Mavdrophane, both from 25 year old vines. It was aged for at least 12 months in 80% new French oak, has an alcohol content of 13.5%, and about 1000 cases were produced. Athanassios noted that many Greeks are Francophiles and in the past, there was a Cabernet Sauvignon craze in Greece when many wineries planted the grape, including Athanassios. He currently only has a small amount of Cabernet remaining as his focus is more on indigenous grapes.

This was a pleasant wine, with dark berry flavors, mild tannins, spice notes, and good acidity. There were some mineral notes, which differs from many other Cabernets. However, though tasty, it wasn't a particularly exciting wine, and for the most part, you might think it came from almost any wine region. 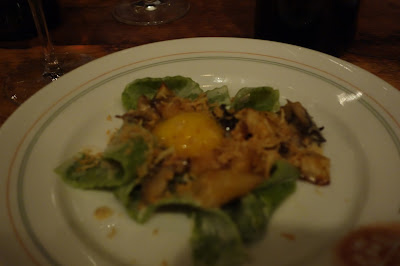 We moved onto the next course, Foraged Mushrooms with mustard green parpardelle, parsnip, and egg yolk. With lots of earthy and umami flavors, this dish was a winner and the Oenofilos was able to stand up to the bold flavors. 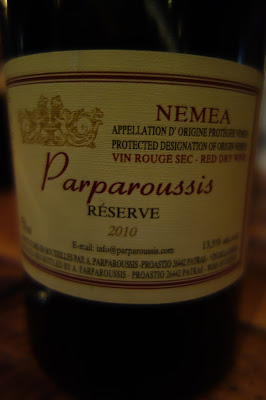 The 2010 Nemea Reserve (about $50), made from 100% Agiorgitiko, was certainly an impressive wine. The grapes are from 20 year old vines from a eight hectare property in Gymno, a tiny vineyard commune in Nemea. The wine is aged for about 24 months in French oak, has an alcohol content of 13.5%, and is only made in exceptional years. Prior to 2010, the last vintage had been 2005, and there will be vintages for 2012 and 2013.  This wine was like in some ways a fine Burgundy but with its own exotic component. It was complex and velvety, with a delicious melange of red and black fruits, with mineral notes, earthy aspects and herbal elements. Well balanced, silky tannins, and a long and satisfying finish. With lamb, this was superb. Highly recommended. 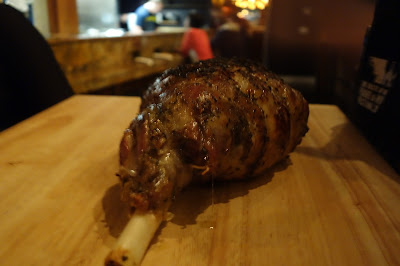 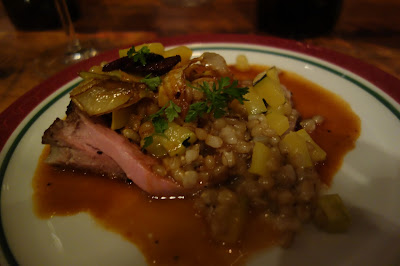 Chef Dan Bazzinotti prepared an amazing Whole Roast Leg of Lamb and once it was sliced on your plate, it was accompanied by roasted garlic jus, kalamata olive, caramelized leek, and wheat berries. The lamb was as tender as butter, with plenty of rich lamb flavors, yet not gamey ones. I probably could have devoured that entire leg myself. Simple perfection. 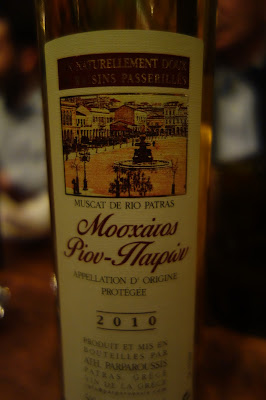 The 2010 Muscat de Rio Patras (about $40) is made from 100% Muscat and is not fortified. Made in an ancient manner, the grapes are first dried in the sun for ten days and then they are vinified. This dessert wine is nicely balanced, with good acidity to balance its sweetness. It is rich in the mouth, with pleasing flavors of peach, tropical fruit, honey, and dried fruit notes. It is all you want in a dessert wine, and will impress any wine lover. 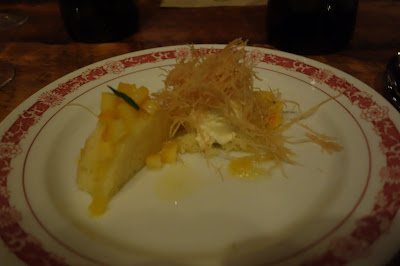 For dessert, we enjoyed an Olive Oil Cake with kataifi, orange, and blue cheese ice cream. For me, the star of the dish was the ice cream, especially as I love blue cheese. It was tangy and sweet, combining well with the soft cake and crunchy kataifi. A fine ending to a delicious meal.

In general, the wines of Parparoussis provide value for their price point, offering complexity, intriguing flavor profiles and a fine taste. Concentrating on indigenous Greek grapes, practicing organic viticulture and using indigenous yeasts, the winery has a compelling philosophy too. These aren't entry level Greek wines, but if you started your Greek wine experience with these wines, you would be impressed. Seek out the wines of Parparoussis and get a taste of history.

And check out Bisq too, and learn why so many people are enamored with this new restaurant.

Posted by Richard Auffrey at 9:55 AM