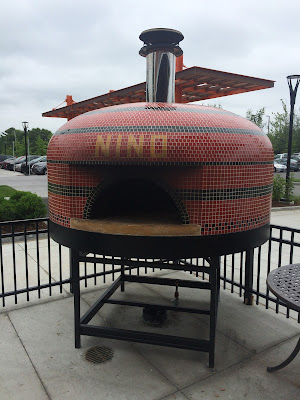 Osteria Nino, one of my Favorite New Restaurants of 2015, recently hosted their first wine dinner of 2016, a celebration of the wines and cuisine of the Piedmont, a region in the northwestern corner of Italy. Piedmont is known for its beef and white truffles, Barbaresco and Barolo. Executive Chef Walace Benica created a four course meal of traditional Piedmontese dishes while Director of Wine Sam Alberts and Steven Chevalier of Ideal Wine & Spirits Co. selected and supplied the wines.

I was invited as a media guest and we all sat at a communal table to enjoy the food and wine, as well as good conversation and some education about the wine. Everything, as usual, was delicious and everyone I spoke to near me also greatly enjoyed the meal. Both Sam and Steven spoke during the meal, talking about the various dishes and wines, as well as taking any questions. Their next wine event will be in March and I highly recommend you check it out. 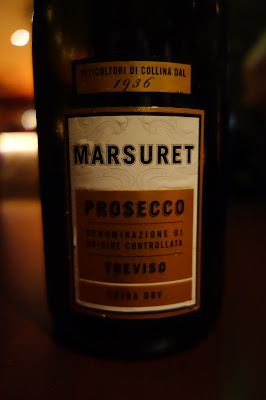 We began the evening with a flute of Masuret Prosecco Extra Dry, an easy drinking, dry Italian sparkling wine with tiny bubbles, pleasant fruit flavors and a hint of floral notes. It is made in the Charmat method and has an 11.5% ABV. A value sparkling wine for everyday drinking. 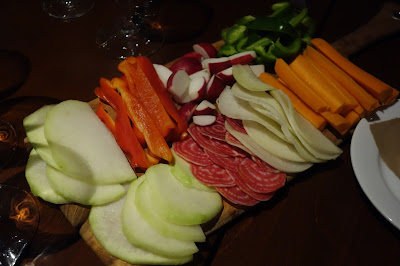 The first course of the evening was Bagna Cauda, seasonal vegetables with an anchovy & garlic dipping sauce. "Bagna Cauda," which translates as "hot bath," is a traditional Piedmontese dish, thought to have originated during the late Middle Ages as a dish to celebrate the grape harvest. It is commonly a seasonal dish, served during the winter, and involves dipping vegetables, whether raw or cooked, into a special dip. The dip is simply prepared with ingredients such as anchovies, garlic, and olive oil though variations can be found as well.

We were provided a large platter of raw vegetables, including kohlrabi, watermelon radishes, black radishes, red radishes, carrots, and peppers. The dip was delicious, a bit briny with plenty of garlic flavor, and made for a compelling dip for the veggies. It was also tasty to dip bread into this sauce and I suspect the dip has many other uses as well. 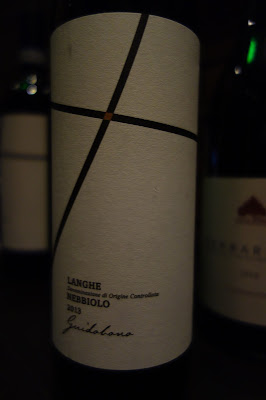 With this course, we sipped a wine from the Guidobono Winery, their 2014 Guidobono Langhe Nebbiolo. Made from 100% Nebbiolo, and with a 14% ABV, this wine is fermented in stainless steel vats and then 50% is aged in large, used oak barrels for about eight months. Nebbiolo allegedly received its name from the word nebbia, which is Italian for "fog," as there are frequent fogs in the Piedmont region. This is intended to be a more entry level Nebbiolo, one lacking the aging found in Barbaresco and Barolo, and which is meant for drinking now. Chevalier stated that "Nebbiolo is the Pinot Noir of Italy," a sentiment shared by others as well, who see many similarities between Burgundy and the Piedmont.

With a light red color, this wine has a pleasant nose of cherries with a hint of spice, and on the palate is smooth and fruity, easy drinking but far from simple. With soft tannins, good acidity, and a delightful blend of red fruit and spice flavors, it would be an excellent choice for many different dishes, from a simple pizza or burger, to a nice pasta dish. And at about $14, it is a very good value too. I would buy this by the case to ensure I always had a bottle on hand. 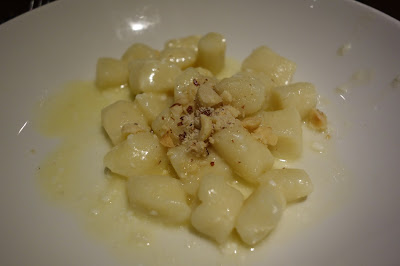 The second course, another traditional Piedmontese dish, was Gnocchi al Castelmagno e Noci, housemade gnocchi with Castelmagno cheese & hazelnuts. Castelmagno cheese, made from cow's milk, extends back at least to the later 13th century and it is said the cheese was named after San Magno, a Roman soldier who was martyred in the Cuneo mountains. Hazelnuts are also well known in Piedmont and there is even Protected Geographical Indication for Nocciola del Piemonte, the hazelnuts of the region.

The gnocchi were soft and pillowy, a light pasta covered with the melted Castelmagno, which added an interesting cheesy tang to the dish and the hazelnuts provided a crunchy texture and nuttiness to the smooth gnocchi. These aren't the heavy, dense gnocchi you find at some other restaurants, but rather light gnocchi which will make you crave another dish. Osteria Nino makes all of their pastas very well and you'll never go wrong ordering one of their pasta dishes. 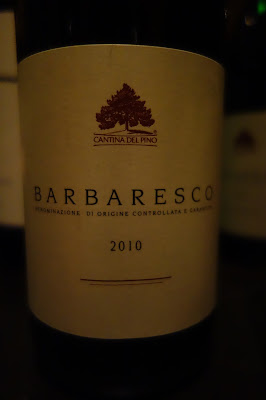 Our next wine was from the Cantina del Pino, a small winery in Barbaresco, which takes it name from a lone pine tree set atop a hill. Their 2010 Barbaresco is made from 100% Nebbiolo and was aged for two years in oak and eighteen months in the bottle. The grapes come from vineyards in the communes of Barbaresco and Nieves.  Regulations state that Barbaresco wines must be aged for a minimum of 2 years, with at least 1 year in oak, prior to release. Barolo must be aged for a longer time. Another significant different between Barbaresco and Barolo is the soils in the areas where they are produced, a topic worthy of its own article.

The 2010 Cantina del Pino Barbaresco (about $40) is from an excellent vintage. It has an intriguing nose of black fruit and subtle spices and a touch of floral notes. On the palate, it possesses restrained tannins, excellent acidity and deep, complex flavors of black cherry, blackberry, violets, black pepper and spicy accents. It is dry and elegant, with a lengthy finish. Absolutely delicious and a nice accompaniment to the gnocchi dish. It isn't cheap but this is an impressive wine that is well worth a splurge. 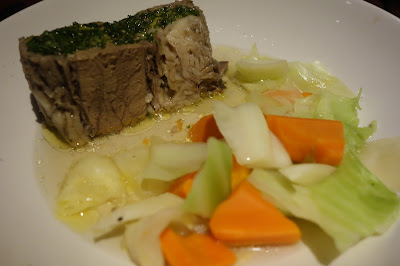 The final savory dish, another traditional Piedmontese one, was the Bollito di Manzo, braised short rib with carrots and cabbage. Traditionally, the beef was boiled with some vegetables, ensuring the beef would be tender. This short rib was certainly tender and flavorful and your fork alone was needed to break the beef into smaller, bite-sized pieces. The broth was also savory and tasty, helping to provide additional flavors to the carrots and cabbage. 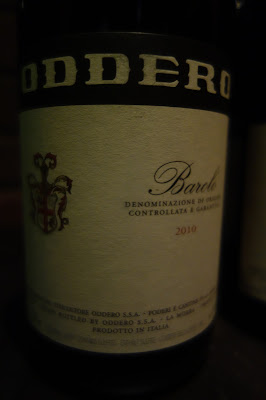 For this meat dish, we had a 2010 Barolo from the Odder Winery, which has been producing wine since the 1860s. To be labeled DOCG, a Barolo must have at least two years aging in oak and at least one year in the bottle prior to release. Their 2010 Barolo (about $45) is made in a traditional style, aged in various sized Austrian and Slavonian oak barrels. This is a more muscular wine, though still with a sense of elegance, of restrained power. The tannins are more moderate, with a complex melange of flavors, including black cherry, plum, violets, spice and some earthiness. It also possesses a fuller body, a lingering and intense finish. This wine is still relatively young and will improve more with time, though it already shows much potential. Splurge on this wine and put a couple bottles in your cellar for a few years. 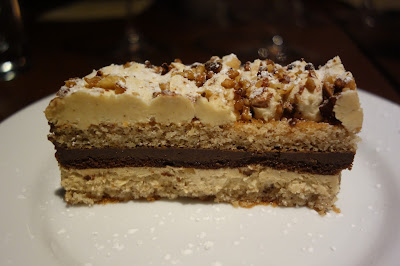 For dessert, we savored the Torta di Nocciola, a chocolate & hazelnut cream cake. Creamy, with plenty of chocolate flavor, and a nutty crunch, this was an excellent way to end the meal. It wasn't too heavy though it was loaded with flavor. 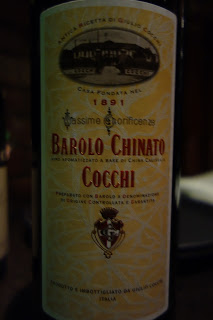 Our final wine was the Cocchi Barolo Chinato (about $50), a unique Piedmontese digestif. The story claims that Barolo Chinato was invented by Giuseppe Cappellano, a 19th-century pharmacist. Cappellano thought Barolo could be therapeutic, especially if he added some botanicals to the wine. One of the botanicals was quinine bark, giving Chinato its name. Some sugar was also added and then the blend was aged some. Today, producers all have their own secret recipes for creating Chinato and it is thought to be a great pairing with chocolate. I've had Chinato before and it can be intriguing, with such a complex taste profile.

The Cocchi Barolo Chinato possessed that complexity, being bitter and herbal, spicy and sweet, with black fruit flavors. The flavors blend harmoniously and you should slowly savor it, to revel in its unique taste profile. It is hard to describe the taste in words, as there is so much going on in this wine. It worked well with the Torta and I can understand why people say it is such a great pairing with chocolate.

This Piemontese wine dinner was a culinary pleasure and indicative of the quality that Osteria Nino  brings to the table all the time. They remain consistently good and continue to receive my highest recommendation. I dine there frequently and will continue to do so. If you haven't been to Osteria Nino before, then make the trip to Burlington and enjoy their delicious Roman-inspired cuisine and well-curated Italian wine list.
Posted by Richard Auffrey at 3:00 AM

Man, I'm hungry after reading this! Thirsty too!
Terry