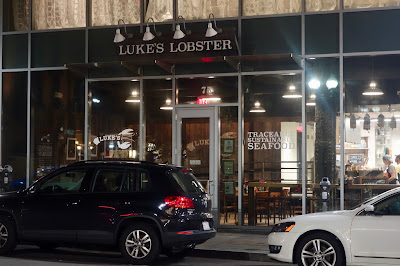 It's a divisive culinary combination, one sure to ignite passions in each side of the divide. There are some who believe seafood and cheese should never mix, while others are more open to the potential delights of such a combination. An article in the Smithsonian Magazine discussed some of this controversy, siding with those who enjoy seafood and cheese, though noting it doesn't work with all types of seafood.

On Facebook, I held an unofficial poll, asking what people thought of the idea of a Lobster Grilled Cheese sandwich. The answers were essentially split, with roughly half liking the idea while the other half opposed to it, commonly mentioning that they don't believe in combining seafood and cheese at all. Personally, I think seafood and cheese can work very well, dependent on the specific dish. For example, I've previously enjoyed some delicious Lobster Mac n' Cheese and Crab & Cheese casseroles. And the idea of a Lobster Grilled Cheese appeals to me. What do you think of such a sandwich? 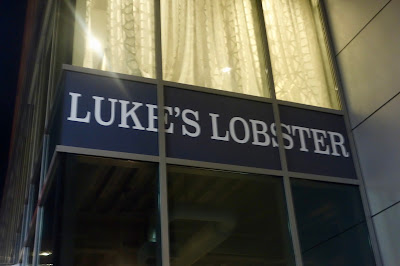 I recently had the opportunity to try a Lobster Grilled Cheese and more at Luke's Lobster at their Back Bay location. They also have a location in Downtown Crossing. I was invited as a media guest to check out a couple of the items on their new winter menu, and this was the first time I had dined at this restaurant. It won't be the last.

Luke's Lobster is a chain of sustainable seafood, fast casual restaurants, centered on lobster rolls, with locations across the country, from Maine to Las Vegas, and even in Japan. Started by Luke Holden, a Maine native and former lobsterman, the first Luke's Lobster opened in 2009 in the East Village of New York City. The Back Bay location is one of their largest, seating about 46 people at a number of tables and a counter. The decor has a nautical theme, and the wood for their tables also comes from Maine. On the evening I dined there, many of the tables were occupied, and it was clear most of them were ordering lobster rolls. 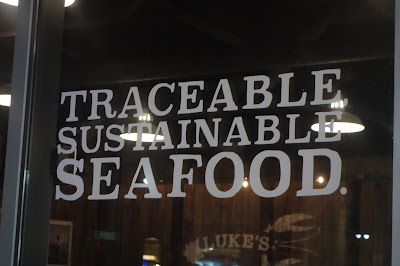 Seafood sustainability. I've often written about its importance, that it is essential to the continued existence of the human race. We need to protect endangered seafood species as well as to protect the health and welfare of the oceans and other waters. We cannot continue to destroy our environment and deplete our essential resources. As such, I'm very glad to see that Luke's Lobster is dedicated to serving only traceable, sustainable seafood. On their website, it mentions: "Luke’s handles every step of the supply chain to ensure that only exceptionally fresh seafood is served in our shacks. We hand pick the lobster directly from the lobstermen at the dock, and our sister company, Cape Seafood, immediately cleans and steams it to preserve its freshness and quality."

Cape Seafood, a seafood processing plant in Saco, Maine, was founded in 2012 by Luke and his brother, Bryan, to supply sustainable seafood to Luke's Lobster as well as other seafood restaurants across the country. It is certified sustainable by the MSC and is also a SQF Level 3 food safety certified seafood company. This is important as some seafood landed in the U.S. actually gets sent overseas to be processed, which can cause problems with traceability and safety. 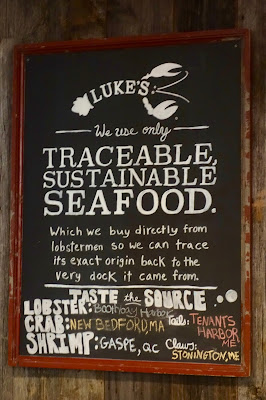 Much of their seafood is sourced from the waters of New England, from Maine lobsters to Crab from New Bedford. Their Shrimp generally comes from Eastern Canada, and not from Southeast Asia where many other restaurants source their shrimp. There have been significant problems with some Southeast Asia shrimp farms, from slavery to environmental destruction, so sourcing locally can avoid any potential problems. I've often advised that we need to eat more domestic seafood, as about 90% of the seafood we now eat is imported, and I'm very glad to see Luke's sourcing.

The picture above shows a sign which is prominent in the restaurant, keeping customers updated on the source of all of Luke's seafood. Consumers should know where their seafood comes from and it's great to see that the bounties of our local waters is being served. 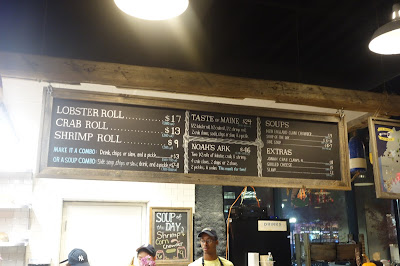 Their Menu is small and basic, helping them concentrate on ensuring the quality of their items. They don't need an extensive menu. Your basic choice is the Lobster ($17), Crab ($13) or Shrimp ($9) Rolls, which are served Maine style, on a buttered, toasted, New England-style split top bun with "a swipe of mayo, drizzle of lemon butter, and dash of secret seasoning." As each roll is made fresh, you could omit or add extra of any of those toppings. That is especially good for those people who dislike mayo. The Lobster Rolls are their biggest seller, about four times greater than their other rolls, and on a Saturday, they can easily sell 300-350 lobster rolls, if not more.

For an additional $3, you can make your roll a Combo, adding a drink, chips or slaw, and a pickle. And you can also add a side soup as well for another $7-$8. The menu has a number of Sides, including: Clam Chowder, Soup, Grilled Cheese ($5), Jonah Crab Claws, Lobster Tail, Slaw, and Cape Cod Chips. There are usually some seasonal items too, such as the Kale Warm Grain Salad ($15), which is topped by a chilled lobster tail, on their winter menu. The winter menu items also include a Lobster Grilled Cheese ($13) and a Crab Grilled Cheese ($10). 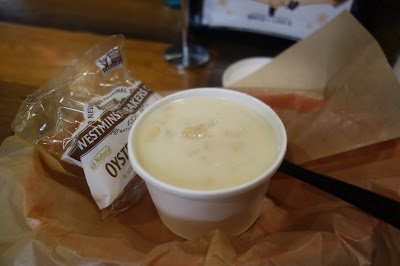 Their soups and chowders are made by Hurricane's Soups, a small family business located in Maine. I tried the New England Clam Chowder, which is made with fresh wild clams, clam broth, heavy cream, diced potatoes & minced onion. It wasn't too thick or thin, having plenty of small pieces of potato and clams. It had a pleasing and creamy taste and it was also good to see that even the Oyster Crackers were local, from Westminster Bakers in Vermont. 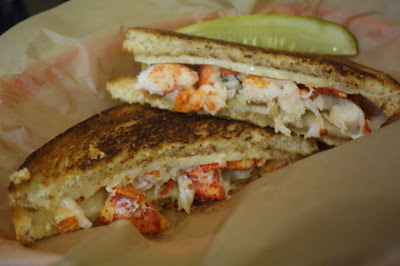 The Lobster Grilled Cheese ($13) consists of an 1/8 of a pound of Maine lobster, melted Gruyere cheese, and organic white bread. As you can see, there's plenty of lobster within the sandwich, primarily knuckle and claw meat. The thin slices of buttery bread were grilled and crispy while the Gruyere added some creaminess and a nutty touch to the sandwich. The lobster has a touch of sweetness and adds some chewy texture to the sandwich too. Overall, it was quite tasty, well-balanced, and an excellent comfort food, elevating the simple grilled cheese.

Yes, lobster and cheese worked well here and I think the choice of Gruyere was a good one. The combination brings to mind the classic French dish of Lobster Thermidor, which is typically topped by melted Gruyere. You typically think of a Lobster Roll as a summer treat and this grilled cheese makes for a fine option for the chillier weather of the autumn and winter. 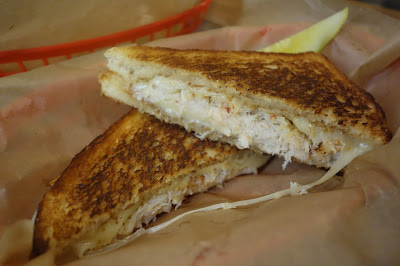 The Crab Grilled Cheese ($10) also consists of an 1/8 of a pound of Crab meat, melted Gruyere cheese, and organic white bread. The same comments about the bread and cheese apply here, and the sweet and plentiful crab meat was an excellent addition to the grilled cheese. There was less texture than the lobster meat, but actually in a good way. In fact, I had a slight preference for the Crab Grilled Cheese though I certainly enjoyed the Lobster as well. Crab and cheese is another combination which I think works very well.

My only minor issue with the Gruyere and bread is that they are not sourced locally as the Gruyere is from Wisconsin and the bread from Colorado. When I raised the issue, I was told that it would be brought up to management for discussion. There seems to be little reason why they couldn't find a more local source for both items. And it seems that it would better follow their basic value of using local sourcing. 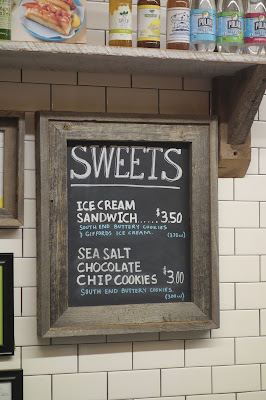 To enjoy after your meal, or even as your meal, they serve two Sweets, Sea Salt Chocolate Chip Cookies ($3) and an Ice Cream Sandwich ($3.50), with the cookies for both sourced from the South End Buttery and the ice cream from Gifford's (located in Maine). 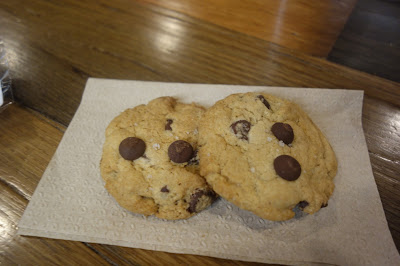 I'm a fan of the South End Buttery and their Sea Salt Chocolate Chip Cookies deliver, with a compelling blend of sweet and salty. It's a fine way to enjoy a meal, and aren't too heavy. Or you can just buy them and take them home to enjoy later if you are too full.

Luke's Lobster impressed me with their basic concept, including their devotion to seafood sustainability, and their food was tasty and compelling. Yes, seafood and cheese can work well together, though I'm not not everyone will agree. For pleasing comfort food this season, check out Luke's Lobster for their grilled cheese, and enjoy either the Lobster or Crab.
Posted by Richard Auffrey at 3:00 AM

So great to read about this concept

Do yourself a favor and find your way to Luke's you will not be disappointed.