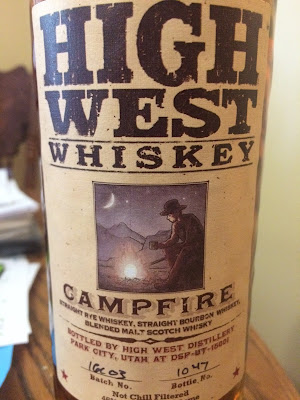 "How many distilleries existed in Utah, prior to 1862, cannot be ascertained, though we know there was no scarcity. The revenue collector’s record shows, between 1862, when the IRS went into effect, and 1869, the arrival of the railroad, thirty-seven distilleries operated in Utah, all owned by Mormons and with Brigham Young among them. When the first settlers arrived in Utah, distilling was a way of life because alcohol was a primary medicine as well as a way to turn food that would have spoiled into something of great value."
--The American Historical Magazine (Volume 3, January 1908 – November 1908),  Mormonism and Intoxicants by Theodore Schroeder

As I've said multiple times before, blending in alcohol production can be an exquisite art, whether it is used to create an elegant Champagne or a compelling Bourbon. Not enough credit is given to the skills needed to be an expert blender, and not enough credit is given to those products which exemplify the best of the blending art. I want to highlight some people in Utah who are excelling at the art of blending, creating intriguing and delicious whiskies.

In 2009, High West Distillery was established in Park City, Utah, by David (a former biochemist) and Jane Perkins, husband and wife, and it was the first legal distillery permitted since 1870. They began operation with a 250 gallon still and soon enough needed to expand so that they now have four unique locations, including a distillery in Wanship, which has a 1,600 gallon pot still. They currently produce about 70,000 cases annually. Although High West produces some of their own whiskies, they have also acquired a good reputation for their blended bottlings. I should note that High West Distillery was recently acquired by Constellation Brands, Inc.

It is said that High West's David Perkins met with Jim Rutledge, the former Master Distiller at Four Roses, and was inspired about the art of blending. David then began experimenting in this vein, and one of his creations has been High West Whiskey Campfire, one of the most unique whiskey blends you'll likely find.

A friend of mine, Alan Bahr, highly recommended this whiskey to me. Alan is a talented game designer, the owner of Gallant Knight Games, which has published Tiny Frontiers and the forthcoming Tiny Frontiers: Mecha & Monsters. He has also been involved in several other role-playing games like The Powder Mage RPG and Planet Mercenary.

I asked Alan to comment on this whiskey blend, and he stated: "I remember the first time I had High West Campfire. I was 24/25ish, had just moved 40 miles from religiously conservative college town to big city in Utah. One of my best friends who lived there, took me out to a bar that became my favorite very quickly, the Bourbon House.

"One of the first drinks we tried was High West Campfire, and I was in love. To this day, it's smokey, unique flavor reminds me of friendship, nostalgia and basement dive bars, full of character, clattering pool balls. High West is also a Utah export, which is a fact of personal pride (for no good reason). It's whisky, from Utah of all places, and made unique, like Utah makes it's citizens.

"Even though I've grown my tastes and expanded my horizons, I think, when the sun sets over the Uintas, and I watch get to watch red light overcome my decade long home, there's still a smell and taste, of campfire in the air. Here, in the last bastion of my high west."

The High West Whiskey Campfire ($55-$60) is a blend of a straight Bourbon, a straight Rye, and a blended peated Scotch. Are you aware of anyone else creating such a blend? It seems unusual and you might be hesitant at first, wondering whether such a blend can work well or not. However, I strongly encourage you to take a chance on this blend, and I think you'll be pleasantly satisfied with what you taste.

I shared this bottle with several other whiskey-loving friends, and they all enjoyed it. On the nose, it has a complex and alluring aroma, with hints of spice, light smoke, honey, vanilla, and floral notes. As I took a hearty sip, I was amazed at the intriguing and complex procession of flavors that seduced my palate, proceeding from a sweet and fruity start, leading through a spicy middle and ending with a mild smokiness. Sweet, spicy and smoky. It was fascinating that you could easily see the influence of each different type of whiskey, none being dominated by any other.

As you paid more attention to each sip, you could detect hints of each whiskey type in all three phases, though they were more subtle. And the more you concentrated, the more flavors you discovered in this superb melange, from caramel to citrus, leather to baking spices. With its higher alcohol content, there is some minor heat when you first taste the whiskey, but that heat seems to fade away as you sip your glass. Overall, it is a silky & smooth whiskey, with a long and lingering finish. An excellent sipping whiskey, I could easily sit and drink this all night, and it earns my hearty recommendation.

"We like to enjoy Campfire whiskey with s’mores...or good-looking strangers."
--High West Distillery website
Posted by Richard Auffrey at 9:19 AM