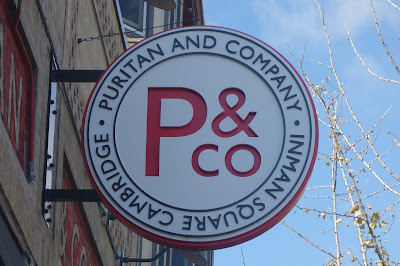 "Wine is the Georgians’ poetry and their folklore, their religion and their daily bread."
--For the Love of Wine: My Odyssey through the World's Most Ancient Wine Culture by Alice Feiring

Georgians drink prodigiously and wine is an integral aspect of their lives. For example, many people grow vines and make wine at home. Historically, many invaders ripped up Georgian vineyards so home owners would try to protect the vines, keeping them in their homes, leading to much home wine making. Like the French, Greeks, and Italians, Georgians also have a spiritual connection to wine, viewing it as far more than just a simple libation. 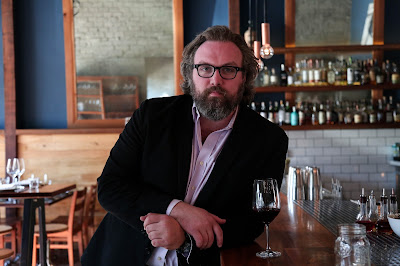 A media tasting of Georgian wines was recently held at Puritan & Co., led by Taylor Parsons, the sommelier at République in Los Angeles. With 12 years of experience, he is a working sommelier and stated he is not an expert in Georgia wines but visited the region earlier this year. He is approaching these wines as a potential buyer, coming at them with fresh eyes. He began the tasting discussing some of his thoughts and observations about Georgian wines.

Georgians are generally insular when it comes to wine, drinking only Georgian wines and it is hard to find any other wines in their country. There are a number of very large wineries in Georgia, some that may produce as much as 7 million bottles, and plenty of small wineries, making only a few thousand bottles. However, there are only a handful of medium-sized wineries, producing about 40K-60K bottles. With approximately 525 indigenous grapes, Georgians have much to work with though they are intrigued by international grapes as they are relatively new to them.

Unlike winemakers in most wine regions, Georgian winemakers don't talk much about the details of production. They expect their wines to stand on their own, to let their taste speak volumes. There is also little codification of terroir, though that is starting to change. In addition, there is no stratification of young and old vines, and it is rare to find old vines in Georgia. Georgians also do not have a trophy wine culture, so even their best wines are still relatively inexpensive compared to other wine regions. This means you can find some excellent values from this region. 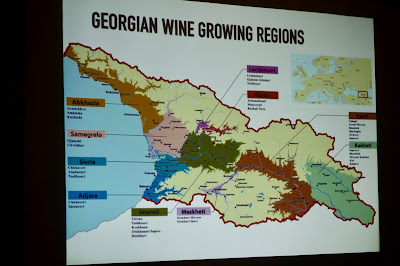 ".., their common toast, “Gaumarjos” — which means “To your victory” —"
--For the Love of Wine: My Odyssey through the World's Most Ancient Wine Culture by Alice Feiring

Qvevri, terracotta pots used for fermentation and aging, are important to many Georgian wine makers. Usually buried in the earth, qvevri are cheap to buy though they must be installed properly, which can add to the cost. Some qvevri are over 100 years old, and Georgians tend not to release wines until they have been aged properly. They are also serious about hygiene, keeping the qvevri very clean. Taylor stated you don't find the usual flaws of some natural wines in Georgian wines. It is intriguing that the source of the clay contributes its own terroir to the wine, with clay from the west side being darker in color, providing a different impact to the wine. 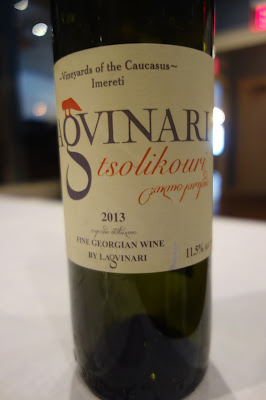 As an aperitif, before the event got started, we tasted the 2013 Lagvinari Tsolikouri, made from the indigenous Tsolikouri grape and which is primarily found in the Imereti region. Lagvinari is a small, organic winery and this wine was fermented in qvevri, wasn't fined or filtered, and is even vegan/vegetarian. With a 11.5% ABV, this is a dry, orange wine with intriguing flavors of bright citrus and apple, with hints of herbs, dried fruit, nuts, and some minerality. Delicious and complex, this was a fine way to begin the tasting event. 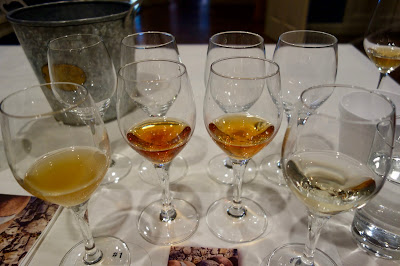 Our first flight of wines for the tasting were intended to highlight vindication choices. As you look at the color of wines, you'll note that only one looks like a traditional white wine, the others being orange or cloudy. Georgians like color in their wines, preferring darker reds, but their preference seems to extend to white wines as well. The coloration of these wines can seem strange to the average consumer who is not used to such different wines. If they can be persuaded to taste the wines though, they might be surprised at the fact that they enjoy them. However, they may have to get over their preconceptions over what a white wine should taste like.

The first flight of four wines were all made from the Rkatsiteli grape, an ancient, indigenous white grape, whose name means "red stem," and which is known for its high acidity. It does well with different vinification methods, is generally neutral in flavor and can be reiminscent of Ribolla Gialla. Some Rkatiseli is actually grown in the U.S., including in Massachusetts and New York. 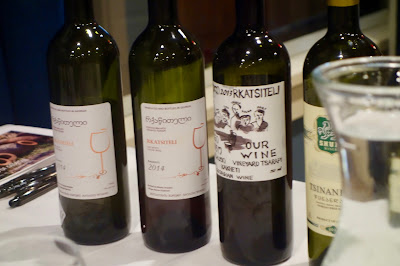 The 2014 Niki Antadze Rkatsiteli is from a tiny winery, founded in 2006 in the Kakheti region, which organically farms about 3 hectares of vineyards, at a high elevation. They also ferment and age their wines in qvevri. This specific wine was fermented without any skin contact and is unfiltered. It possesses an intriguing taste, with notes of citrus, herbal elements and a bready aspect. It has lots of acidity and also seems bright and fresh. This would be a good pairing with seafood.

We then compared that wine with the 2014 Niki Antadze Rkatsiteli which had about six months of  skin contact. It presents a much different palate with notes of black tea, honey, salted nuts, and a floral element. It was recommended that this wine be paired with charcuterie, bacon, and other fatty foods.

The 2014 Our Wine Tsarapi Rkatsiteli is from one of the first Biodynamic wineries in Georgia and is located in the Kakheti region. It is produced from 60+ year old vines (blended with some new vines), fermented in qvevri, and macerated for 6 months. It is smoky and earthy, with an underlying minerality and subtle hints of citrus and pine. A very intriguing wine and one of my favorites of the tasting.

The 2014 Shumi Tsinandali is from a winery, founded in 2001, which is located in the Kakheti region and produces about 1.5 million bottles annually. Tsinandali is a small area within Kakheti and their wines are a blend of Rkatsiteli & Mtsvane, where the Rkatsiteli dominates. Mtsvane means "green." This wine is a blend of 85% Rkatsiteli and 15% Mtsvane, fermented in oak barrels. This is more of an international style wine, presenting as light and crisp, with bright citrus flavors and oaky notes. 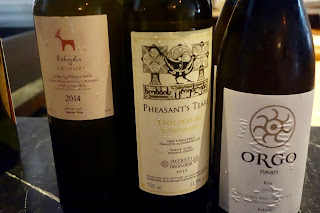 The next flight centered on indigenous grapes beyond the two most popular Georgian grapes, Saperavi & Rkatsiteli.

The 2014 Giorgi Revazashvili Chinuri is from an organic winery in the Kartli region. It was mentioned that the term Chinuri means "of China" and might refer to the fact that Georgia was located on the Silk Road. However, other sources state that Chinuri is derived from the word "chinebuli" which means "excellent." This wine is fermented in qvevri and is a cloudy, pale white color. It possessed flavors of passion fruit accented with herbs. This wine is supposed to pair well with vegetables and might benefit from decanting.

The 2015 Pheasant's Tears Tsolikouri is made by a medium-sized organic winery, that produces about 60K bottles annually, and is located in the Imereti region, said to be the oldest wine region in Georgia. The name of the wine derives from an ancient Georgian legend about a wine so delicious that it could make a pheasant cry. This wine was fermented in qvevri with minimal skin maceration. It possesses an intriguing aroma, exotic fruits and herbs, and on the palate, the herbal notes dominate with undertones of exotic fruit and some minerality. A very intriguing wine.

The 2013 Orgo Kisi is from a small, artisan winery located in the Kakheti region. It is a joint endeavor between Gogi Dikishivili, a famous Georgian wine maker, and his son Temur Dakishvili. As Gogi is a pioneer in the revival of the use of qvevri, Orgo uses these earthenware vessels for all of their wines. Many of the grapes they source are from old vines, aged 50-80 years, and few other wineries are able to source such grapes. This wine is made from Kisi grapes from 50 year old vines, and was fermented and aged in qvevri for 6 months with skin contact for the entire time. Native yeasts are used, the wine is unfiltered and it possesses low sulfites. This was a delicious and aromatic wine, with an interesting and complex combination of black tea and ripe pear notes, with subtle hints of tropical fruit. Another of my favorite wines of this tasting. 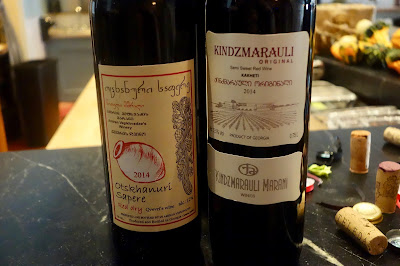 The next flight were red wines, a comparison of west and east. The 2014 Amiran Otskhanuri Sapere is from a small winery in the Imereti region. The Otskhanuri Sapere grape is one of the oldest indigenous grape varieties in Georgia and its name means "Otskhana's colorful," related to the village of Otskhana. This grape is rare and Amiran has the largest contiguous plot of vineyards in Georgia. This wine was fermented on the skins in qvevri without added yeast and aged for 9 months. This was an impressive wine with an aroma of smoke and black fruit. The palate presented high acidity, delicious red and black fruit flavors, moderate tannins and a smoky finish, reminding me a little of Nebbiolo. Nicely balanced, with a lengthy finish, this was another of my favorites of the tasting.

The 2014 Kindzmarauli Marani Kindzmarauli Original is from a large winery in the Kakheti region. This off dry wine is made from the Saperavi grape and is smooth, lightly sweet and fruit with enough acidity to balance the sweetness. It is said to work well with food that possesses bitter flavors, and also be an excellent red wine for chocolate cake. 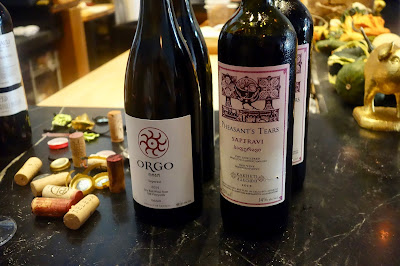 The final flight of four wines highlighted the Saperavi grape, the main red grape of Georgia, which is sometimes compared to Nebbiolo, possessing a good synergy of acidity and tannins. Saperavi is also commonly described as brambly and rustic.

We began with the 2012 Jakeli, Saperavi, which I have enjoyed before. Check out my prior review and I'll note that I highly recommend it.

The 2014 Orgo Saperavi 2014 is another wine which I have enjoyed before. Check out my prior review and I'll note that I also highly recommended this wine.

The 2015 Pheasant's Tears Saperavi was brambly and earthy, with lush black fruit flavors but also a green vegetal taste that is not my preferred style. In some ways, it reminded me of some Cabernet Francs, and if you enjoy those type of wines, you would enjoy this one.

The 2013 Tbilvino Saperavi is from a large winery located in the Kakheti region. This wine spent four days on the skin before being pressed off to finish fermentation, and then underwent a secondary malolactic fermentation. It has been vinified in more of an international style and presents with rich red fruits, especially cherry, notes of vanilla and spice. It is more smooth and pleasant, without any rustic aspects.

I continue to highly recommend that you check out the wines of Georgia. Expand your palate and be open to the different wines this country produces.
Posted by Richard Auffrey at 3:00 AM