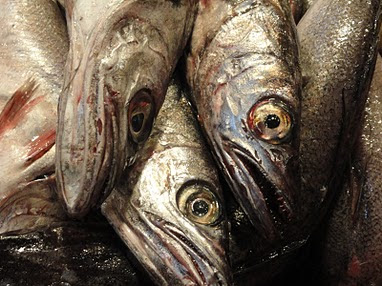 As it's Halloween, let's start with something very scary...

According to the Centers for Disease Control & Prevention (CDC) the leading cause of death in the U.S. is heart disease, killing nearly 600,000 people each year. We all have had family and friends who have died from heart disease, and we should be doing what we can to reduce our chances of acquiring heart disease. Do you want to die prematurely, leaving your loved ones without your presence?

As I've been saying for years, seafood consumption is a significant key to reducing your chances of heart disease. Since the 1970s, over 20,000 research studies have been conducted on the health benefits of seafood and they have concluded that eating seafood twice a week can reduce your chance of dying from heart disease by about 36%. You probably won't find another single food that has been scientifically proven to reduce heart disease so much. Eating more seafood is such a simple change to your lifestyle and it can can save lives.

Low seafood consumption is blamed for 84,000 deaths in the U.S. and 1.4 million globally. Besides helping to reduce heart disease, research has also been providing growing evidence of the health benefits to the brain and bones as well as against cancers and inflammatory diseases.  The USDA and many other bodies recommend that Americans should consume at least 26 pounds of seafood each year. In general, to gain the beneficial health benefits, you should eat seafood twice a week.

Fortunately, there are positive signs from 2015, and we can hope this positive change continues in the coming years. The National Oceanic and Atmospheric Administration’s recently released their annual report on U.S. consumption, Fisheries of the United States 2015. Annual seafood consumption increased to 15.5 pounds, almost an entire pound higher than the previous year. Wow! That is great news, though still significantly short of the goal of 26 pounds per person.

If we want this positive trend to continue, we need to continue to find ways to persuade people, overcoming their objections, to eat seafood more frequently. More outreach is needed. We need more positive articles in the media espousing the health benefits of eating seafood. We need to overcome the obstacles that prevent people from consuming more seafood, such as its high cost and the difficulties many people have cooking seafood at home. We need to get Americans to eat more than another 9 pounds of seafood each year. It's a formidable goal, but it can be accomplished. You owe it to yourself, and your family, to eat more seafood and benefit your health.

Keep eating more seafood!
Posted by Richard Auffrey at 3:00 AM