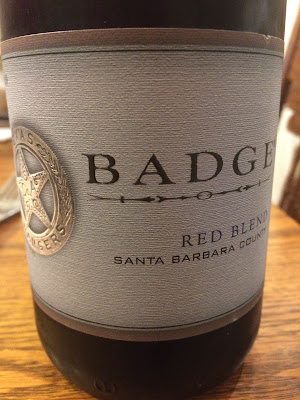 I've enjoyed numerous wines that have been crafted by Kris Curran, so was excited to try another of her wines. Kris, who is a California native, worked at Cambria and Koehler, though much of her fame came from her time at Sea Smoke Cellars, crafting much sought after Pinot Noir. her husband, Bruno D'Alfonso, attained much of his fame working at Sanford Winery, where he worked for twenty-three vintages. Together, Kris and Bruno have launched four brands under D'alfonso-Curran Wines, including D'Alfonso-Curran, Curran, Di Bruno, and Badge.

The BADGE brand was started in 2003 and it was intended to be more affordable than their other labels, yet without sacrificing quality. It is alleged that the brand name derives from a song of the same name by Cream. The song was written by Eric Clapton and George Harrison, and its lyrics aren't intended to make rational sense. Kris and Bruno have also named one of their German Shepherds Badge.

The BADGE wines are produced from grapes in vineyards throughout Santa Barbara County, such as their Pinot Noirs from the AVA of Sta. Rita Hills. They also produce Chardonnay, Syrah and a Red Blend, with prices ranging from $24-$36.

I received a media sample of the 2009 BADGE Red Blend ($26), which is a blend of primarily Grenache and Syrah, with a bit of Merlot and Tempranillo. The wine, with an alcohol content of 14.6%, spends about 68 months in the barrel. With a dark red color, the aromas of this wine were appealing, luring me in with lush fruity notes and hints of spice. On the palate, the fruity element is prominent, ripe plum, blueberry and black cherry flavors, but with subtle spice and herbal notes. It possesses a nice complexity of flavors, a lengthy & satisfying finish, and each sip makes you want to take another. It certainly isn't a fruit bomb, but is more juicy and compelling, perfect on its own or paired with everything from a hearty pasta dish to a burger. Highly recommended.
Posted by Richard Auffrey at 2:30 AM