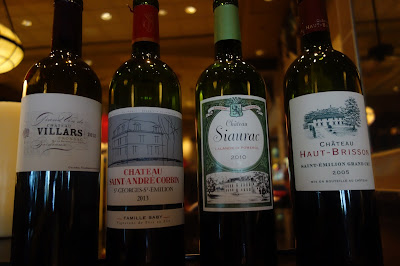 Bordeaux wines have a bit of an image problem with a number of wine consumers. To some, they can seem too pretentious and too expensive. U.S. imports of Bordeaux had recently decreased a small amount but have, during the past 1.5 years, been increasing once again, partially due to a new marketing approach. There is certainly much more to do, more consumers to educate about the realities of Bordeaux wine.

Franck raised a couple of intriguing issues about the region, both which are worthy of further research. First, he noted that the Chinese are purchasing numerous wineries and vineyards in this region. Usually, the Chinese have been retaining all of the employees as they need their expertise in the vineyards and wineries. That is good news but there have been some news articles noting that the Chinese have often been sending the largest portion of their production back to China. China is certainly a huge wine market, but could that mean less Bordeaux wines will be available for the rest of the world.

Second, Franck stated that the biggest challenge currently faced by this region may be environmental. Many of the wineries desire to be more organic and natural in their vineyard practices, but face the economic and laborious challenges of converting their vineyards to follow this ethos. This may be a necessity for these wineries however, it won't be without problems and costs.

One of the objectives of this tasting was to show some affordable Bordeaux, priced $20-$28, though we also had one higher priced, at $50. Contrary to what some consumers believe, most Bordeaux wines are affordable and there is only a small percentage that are high-end wines. It's important to relay to consumers the affordability of Bordeaux, though it is at least as important to relay the fact that Bordeaux is also very food friendly, and not just appropriate for fine dining. As these Right Bank Bordeaux are Merlot-based, and much less tannic than the Cabernet-based Bordeaux of the Left Bank, they can be paired well with a wide range of foods.

Unfortunately, the Saint-Emilion, Pomerol & Fronsac website does a poor job of presenting this concept. On their page Food & Wine Pairings, their basic advice is that "In general, young wines enhance dishes with sauce or spicy foods. The oldest wines are a good accompaniment to more delicate cuisine, such as fish or poultry." Very generic advice and not too helpful. They also mention only two specific dishes, Quail stuffed with Foie Gras and Lamprey à la Bordelaise. Most average consumers have never even tasted either of those two dishes. They would see such pairing suggestions as more pretentious, and would lead them to believe that Bordeaux is most appropriate for fine dining. This section of their website needs to be revised, to present more common food pairings.

For my lunch entree, I ordered a cheeseburger to accompany the Bordeaux wines. Burgers & Bordeaux, a simple and delicious pairing. It's certainly not fine dining and most average consumers would understand and embrace this pairing, certainly much better than they would Lamprey. We need to tell consumers that Bordeaux pairs well with many simple dishes, from pizza to pasta, ribs to hotdogs. We have to break the perception that Bordeaux is only for fine dining. We have to show consumers that Bordeaux can be an excellent, every day wine, that can pair well with plenty of their favorite foods.

The first wine I tasted during lunch was the 2012 Chateau Villars Fronsac ($28), a blend of 72% Merlot, 25% Cabernet France, and 3% Cabernet Sauvignon. The winery was founded in the late 19th century, currently has about 30 hectares of vineyards, and their vines average about 35 years old. They only produce about 8500 cases of wine each year. This wine, with a 14% ABV, was aged for about 12 months in French oak, 40% new. With a medium red color, it had a pleasant aroma of red fruits, plenty of cherry notes, and on the palate it was soft and lush, with interesting flavors of cherry, hints of licorice, mild spice and lengthy, fruity finish. It was easy drinking though certainly not a simple wine, and was very food friendly. 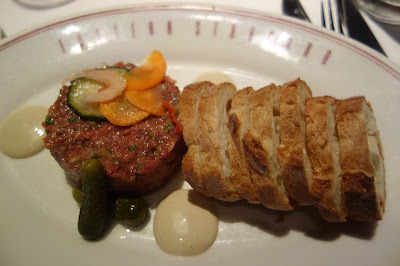 I began my lunch with Steak Tartare, as it is one of my favorite dishes at Eastern Standard. The silky, raw beef paired well with all four of the wines. It's not a dish the average consumer probably enjoys, but I had to indulge myself a bit.

The next wine was the 2013 Chateau Saint-Andre Corbin Saint-Georges Saint-Emilion ($20), a blend of 70% Merlot, 30% Cabernet Franc. This estate is one of the oldest in Bordeaux, and they trace a lineage that extends back to the days of ancient Rome. This wine, with a 13.2% ABV, was aged for about 12 months in French oak, one-third new. It has the lightest red color of the four wines, and had a pleasant aroma of cherry and olive notes. On the palate, it was soft and smooth, with plenty of cherry notes, hints of blackberry, a spicy undertone and a touch of herbal accents. Another food friendly wine, it was the lightest of the group and I could easily see this working well with seafood. 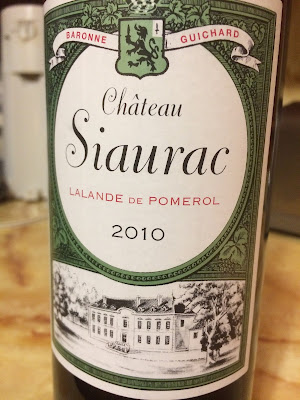 My favorite of the four wines was the 2010 Chateau Siaurac Lalande de Pomerol ($25), a blend of 80% Merlot and 20% Cabernet Franc. The estate reaches back to 1832 and now consists of over 36 hectares, all sustainably farmed with a move to organic and Biodynamic practices in 2016. Their annual production is only about 18,000 cases. This wine was aged for about 16 months in French oak, 30% new. With a medium-red color, the aromas were compelling with a delightful blend of black and red fruits with some herbal accents. On the palate, it had more acidity and tannins than the first two wines, though it was all well balanced. It was a complex and intriguing wine, with delicious flavors of black cherry, ripe plum, and blackberries with dark spices and a hint of earthiness. A lingering and satisfying finish capped off this stellar wine, especially at this price point. It is very food friendly and I think it was a nice choice for my burger, though I could see it pairing well with many other choices as well. Highly recommended. 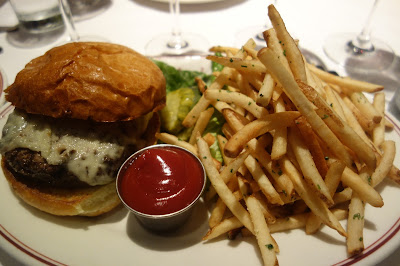 I chose a Burger, with cheddar cheese, for my entree, in large part to show that Bordeaux works with simpler dishes that anyone might like. And all four of the wines worked with the burger. As these Bordeaux were not especially tannic, there wasn't any need for a food to help balance out strong tannins. The softer Right Bank Bordeaux are great choices for lots of comfort food choices. Bring on Burgers & Bordeaux.

The last wine was the 2005 Chateau Haut Brisson Saint-Emilion Grand Cru ($50), a blend of 85% Merlot, 10% Cabernet Sauvignon, and 5% Cabernet France. In 1997, this small, 8 hectare estate was purchased by Peter Kwok, who purchased additional vineyards to enlarge the estate. This wine, with a 13% ABV, was aged for about 15-18 months in French oak, 70%-100% new. It possesses a more subdued aroma, mild red and black fruits with a spicy accent. On the palate, it was more tannins, though still well under control, with a complex melange of ripe plum, dark spice and high acidity. It is more of a dark and brooding wine, one that needs to be accompanied by food, yet it still can do well with something as simple as a burger.

Remember that Bordeaux is far more affordable than you might think and realize that it pairs well with many different foods, and not only fine dining. It will work just as well with a juicy cheeseburger or a pepperoni pizza.
Posted by Richard Auffrey at 3:00 AM

Great blog on Bordeaux wine! The funny thing is that most Americans love these wines by another name: Cabernet Sauvignon, Merlot and Red Blend! And knowledgable wine folks around the world feel that the French versions are more food-friendly than their American counterparts.

It's not the grapes it's the terroir. they've learned to love the warm climate version which is fleshier and softer but they lack the attack to cut the fat of a burger and fries. Elevage is a term that applies to the consumer's palate as well as the wine he consumes.