At this year's Boston Wine Expo, South Africa had a stronger presence than the previous year so I needed to check out some of the new wines that were being showcased. I've enjoyed South African wines for many years, from Chenin Blanc to Pinotage, and I continue to find fascinating and delicious wines from this country. For example, the Swartland is a region that recently has been garnering much praise for its innovative new wine makers. And at the Expo, I found a few fascinating wines from Swartland, as well as some other interesting South African wines. 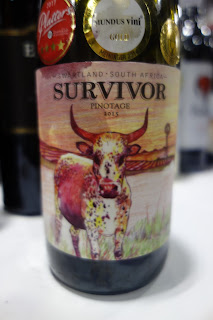 Meridian Prime, an importer of South African wines, was founded in 2011 by Ross Toombs, a native of South Africa. They currently have an portfolio of about 15 producers, from 9 wine regions, with an additional four or five new producers to be launched later this year. At the Expo, I spoke with Sam Timberg, the Managing Director, asking him to show me some of the most intriguing wines they were sampling at the Expo.

The Survivor Wines are produced in the Swartland and has an intriguing origin story. It is said that a truck filled with Nguni cattle, the traditional livestock of the Zulu people, drove by their vineyard. One of the cows leapt from the truck, survived, and escaped into the vineyard. The cow thrived, producing offspring, and the winery decided to call its wines "Survivor," in homage to that cow. Their website also states: "Because she embodies the free spirit of the Swartland, these wines pay tribute to our noble Nguni cow, SURVIVOR."

The 2016 Survivor Chenin Blanc ($18.99) is basically a barrel-fermented wine, with 70% of it undergoing barrel-fermentation infers fill, untoasted Sylvain French oak. Then the wine was aged in the barrel for four months before bottling. It was aromatic and delicious, with a nice depth of flavor, including tastes of pear and citrus with some hints of minerality. It has a mild creaminess to its texture, a nice balance, and a pleasing finish. An excellent value for this complexity and quality.

The 2015 Survivor Pinotage ($18-$20) was aged in 95% French and 5% American oak for about 18 months. Pinotage can be a divisive grape but I've always been a fan, and this example was impressive. I found it to be smoky and spicy, with deep flavors of plum and black cherry, with hints of vanilla, spice and bacon. The tannins were well integrated, it had a lengthy finish, and would be an excellent accompaniment with lamb, steak, or other roasted meats. Highly recommended.

Black Elephant Vintners, founded in January 2013, is a new winery in the Franschhoek Valley, in the Western Cape region. Their 2016 Two Dogs, a Peacock and a Horse Sauvignon Blanc is made with the addition of 5% barrel-fermented old vine Semillon. The Sauvignon Blanc was sourced from seven different vineyards, and the grapes of each vineyard are vinified separately. The wine remains on the lees for about three months and it sees no oak aging. I found the wine to possess a compelling aroma, lots of exotic fruit and lemon notes, and on the palate, it was fresh, crisp and bright. A nice melange of balanced fruity flavors, from grapefruit to pear, lychee to lemon. There are some mineral notes too amidst the complex flavors. One of the better Sauvignon Blancs I've tasted in some time. Highly recommended.

The Eikendal Winery, founded in 1981 by the Saager family, is located on a 76 hectare estate in Stellenboscch, and its name "Eikendal" means "Oak Valley" in Afrikaans. Their 2015 Eikendal Chardonnay ($18-$20) is produced from grapes from 3 different vineyards, with wild fermentation  and spend time in untoasted Burgundian oak barrels. This is an impressive Chardonnay, being fresh, crisp and complex, an elegant wine with alluring flavors of apple, citrus, and pear, an underlying minerality, and a whisper of spice. The finish lingers and lingers, and pleases every moment. This wine drinks like a Chardonnay at twice the price and is highly recommended.

The 2014 Eikendal Charisma ($20-$25) is a unique blend of 61% Shiraz, 27% Petit Verdot, and 12% Sangiovese, which was aged for 15 months in oak. This was a muscular wine, with plenty of power though its tannins are restrained yet it still yearns for a thick steak or roast lamb. It is spicy, with ripe flavors of plum and black cherry, and hints of violet flowers, and an intriguing savory, almost olive, aspect. Nice complexity, a lengthy finish, and a nice uniqueness to its taste. 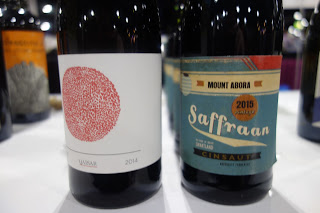 Blue Crane Imports is a Chicago importer that specializes in South African wines. The blue crane, also known as the Stanley crane and the paradise crane, is the national bird of South Africa.

Their 2015 Mount Abora Saffraan Cinsaut is produced from a Swartland winery that is seeking to bring back the popularity of the Cinsault grape. Cinsault, which has been growing in South Africa since the 1880s, was the most popular red grape in South Africa, about 75% of all red wines, at the start of the 20th century. The original South Africans used to refer to this grape as Cinsaut, without the "l" and Mount Abora has chosen to retain this historic spelling. Swartland now possesses a number of old-vine Cinsault vineyards.

For this wine, the Cinsult comes from 37 year-old vines and the wine was aged in older French oak for six months. their wine production is also natural, without commercial yeasts. At only 11.5% ABV, this is a light, easy-drinking wine with beautiful aromatics, delicious red fruit flavors, mild notes of black pepper, and a backbone of minerality. It is elegant and compelling and could remind you of a fine quality Pinot Noir. Highly recommended.

Also from the Swartland, the 2014 Tim Martin Wines Qaisar is made from 100% Mourvedre, sourced from an organic vineyard. It was fermented in an open-top French oak fermenter and then aged for about 11 months in a mix of neutral French oak barrels. This is also an elegant, light-bodied wine with a complex melange of flavors, including cherry, raspberry, eucalyptus, spice, and a hint of earthiness. Each sip seems to bring something new to your palate. And at only 12.4% ABV, it is easy to drink. Highly recommended.

What South African wines have you enjoyed lately?
Posted by Richard Auffrey at 3:30 AM