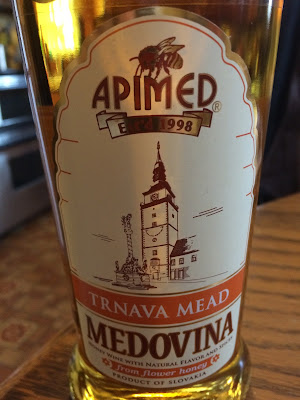 Slovakia is a land-locked country in Central Europe, surrounded by Austria, Czech Republic, Hungary, Poland, and Ukraine. Wine making is Slovakia extends back 2600-2800 years and currently there are approximately 330 registered wineries in the country. Their vineyards include a number of indigenous varieties as well as numerous international grapes. I don't believe I've ever tasted a Slovakian wine so when I saw a Slovak booth at the Boston Wine Expo, I knew I needed to sample some of their wines. The booth offered a few still wines and several meads too.

All three still wines were produced by the Vino Dious Winery, a small and newer winery which occupies a historical manorial wine cellar from the 17th century, which used to be a part of the Smolenice Castle. The term ‘Dious’ comes from the ancient name of Horné Orešany village, representing Orešany's traditional quality of wine. They own some of their own vineyards, and are seeking to purchase more, so they can eventually produce only estate wines.

As all three wines cost about $12-$14, these are good values wines, and I certainly want to explore more Slovak wines.

The Apimed Meadery is a family-run business which produces various of meads, based on different types of honey. They want to highlight the species richness and diversity of Slovak honey, such as blossom, acacia, lime and forest honey. At the Expo, they offered four different meads for tasting, and overall they were sweet, without being cloying, but with additional floral, herbal or spice notes. The meads also sell for about $15-$20 each.

The Original Slovak Mead is predominantly made from Linden honey, a high-quality honey, and has a mild sweetness, with floral notes and a touch of citrus. The Old Slavic Light Mead is predominantly composed of Acacia honey, and possesses a bit of a sweeter flavor than the Original, with some vanilla notes and a hint of herbs. The Trnava Mead is produced from Floral honey, and is about as sweet as the Original, with notes of spice and floral elements. I found it to be more complex than the previous two meads.

My favorite of the meads though was the Old Slavic Dark Mead, made from Forest honey, which is also known as Honey Dew honey. With a mild sweetness, I found this honey to be more complex, with a nice depth of flavor, a darker aspect, and subtle notes of spice and forest. There was so much going on in this mead and each taste seemed to bring something new to my palate. Highly recommended.

Have you ever tasted Slovak wine or mead?
Posted by Richard Auffrey at 3:30 AM