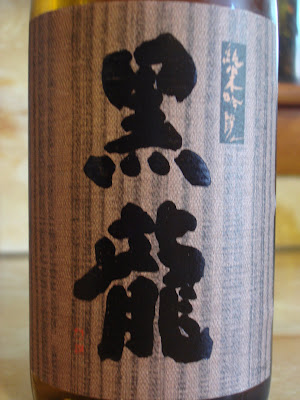 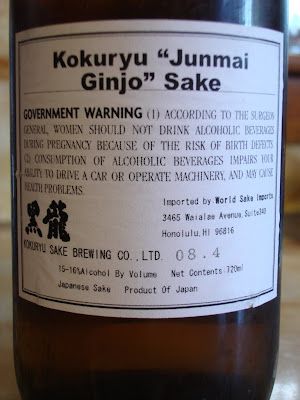 I recently opened another bottle of Saké from the case I recently bought at Sakaya in New York City. The Naraman Muroka Bin Hiire Junmai had been a winner so I hoped that the other Saké I had bought would be at least as equally as good. I was not disappointed in the new bottle I tried.

The Kokuryu Junmai Ginjo ($33.99 for 720ml) is from the Chubu region of the Fukui Prefecture. The Saké name, Kokuryu, translates as "Black Dragon."  The dragon name derives from the nearby Kuzu-ryo river (the "Nine-headed Dragon" river). The rice used for production is known as "Gohyaku Mangoku," which roughly translates as "five million bushels."  This rice is a big-grained rice variety that is only produced in the Fukui Prefecture. The rice for this Saké was polished to 55% and it has an alcohol content of 15-16%. It also has a Saké Meter Value of +3, which means it is slightly dry.

This Saké is supposed to be rich in Umami flavors. And what is umami? It was once thought that we could only taste four flavors: sweet, sour, bitter and salty. But eventually it was discovered that there is a fifth flavor, umami. Kikunae Ikeda, a Japanese scientist isolated this flavor, finding that glutamic acid could not be truly described by the existing four flavors. the name "umami" derives from the Japanese words "umai" (which means "delicious") and "mi" (which means "essence."). We usually describe the taste of umami as meaty, savory or delicious. Some foods rich in umami include parmesan cheese, ripe tomatoes, soy sauce and scallops. Saké can also possess umami in varying degrees.

The Kokuryu had a mild aroma, a touch of steamed rice with underlying hints of fruit, maybe a bit of melon. Yet when I tasted it, the flavor first exploded across my palate. This was a rich and full-bodied Saké with definite umami flavors. My first thought upon tasting this was "Wow! This is incredibly delicious." But I also found it to be a very smooth Saké that caressed my palate, seducing it with a complex melange of flavors including touches of fruit, rice and nuts. It has a very satisgying finish too. This has to be one of the best Sakés I have tasted in some time.

Overall, this was an exceptional Saké though again, it is probably not one for someone new to Saké. This would also make a good pairing with rich foods, including grilled meat. At its price, I consider this an excellent value and it would get my highest recommendations.

Next Sunday, I will review my first Shochu!
Posted by Richard Auffrey at 6:00 AM

Yes I agree- had this sake recently in Hong Kong and I was really amazed at how delicious it was. Honestly so impressed. Also I recommend it as an effective aphrodisiac. Not that I would know anything about that.