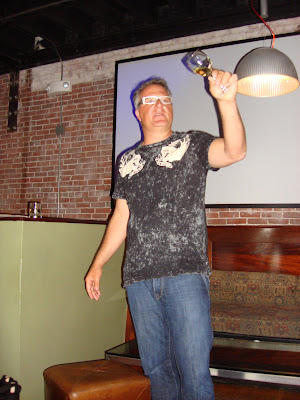 "Wine can of their wits the wise beguile,
Make the sage frolic, and the serious smile."
The Odyssey by Homer
I recently met the Socrates of wine making, Abe Schoener, the founder and winemaker of Scholium Project. Vineyard Road Imports held a special seminar and wine tasting where Abe Schoener discussed his wine making philosophy and led us through a tasting of many of his wines. It was a fascinating event and I was throughly pleased that I had attended.
Schoener has a PhD in Ancient Greek Philosophy and taught for nine years at St. John's College in Annapolis, Maryland. Thus, a comparison to Socrates is particularly fitting though that is far from the only affinity. Schoener's involvement in wine making started while he was on sabbatical in 1998. He first worked as an intern at Stag's Leap Wine Cellars and the next year worked at Luna Vineyards. It was at Luna Vineyards where John Kongsgaard, a famed wine maker, took Schoener under his wing.
By 2002, Schoener had embraced wine making with a passion and began a new phase in his life. This led to the birth of the Scholium Project, his own wine making enterprise. "Scholia" are the marginal comments written on ancient manuscripts. The Scholium Project released their first wine in 2005, a Chardonnay.
"Wine brings to light the hidden secrets of the soul, gives being to our hopes, bids the coward flight, drives dull care away, and teaches new means for the accomplishment of our wishes."
Horace
To look at Schoener, you would never think he had been a philosophy professor as he does not fit that stereotype. Instead, he seems to resemble more an older rock star with the spiky graying hair and the funky glasses. He is extremely personable, humble, down to earth and witty. You can't help but like him.
Schoener has his own unique approach to wine making. He has not taken any formal studies in wine making. His initial education came from the mentorship of John Kongsgaard. Everything else has come from through his own trials and errors. It is through Schoener's approach to wine making that I feel he most closely resembles Socrates.
Like the ever inquisitive Socrates, Schoener spends his time questioning everything about wine making. He questions the established "wisdom" of wine making, the so-called truths which are not supposed to be violated. He does not accept anything as a given, instead subjecting conventional wisdom to his own tests. Sometimes he makes mistakes, yet with Socratic humility, he freely admits to his mistakes and moves on to his next test. And as with Socrates, Schoener has his detractors, those who find his questions threatening, who believe he is glorifying the flaws of wine making. Yet like Socrates, Schoner does not, and probably cannot stop. Schoener is driven with a deep passion to pursue his path toward knowledge, to continue his experiments in wine making.
I give my wholehearted support to Schoener's wine making philosophy. The world can always use more men like Socrates, more men willing to question so-called conventional wisdom and to forge new paths. The wine industry should not grow complacent but should always strive to be better, to be unique. Schoener is a maverick but one who is succeeding in making excellent wines.
"Wine gives courage and makes men more apt for passion."
Ovid
When deciding to make a wine, one of the first decisions that Schoener makes is the selection of the vineyard. He cares little about the appellation, believing that it is the vineyard itself which gives the wine its specific character. Thus, on the label of his wines, he never puts the appellation, just the name of the vineyard. In addition, he does not even place the grape type on the label. Schoener provides each wine with a name from classical history or mythology, a nod to his past as a philosophy professor. These names always have some special significance to the wine, they are not just randomly chosen.
Schoener strives for as little intervention as possible with the grapes. His wines are all single vineyard wines, unblended, and mostly single varietal. His wines are also very low production, maybe a couple hundred cases. He is very proud of his white wines, though many other wine makers are more proud of their reds. Schoener sometimes even gives his red wines less attention. His white wines have a high aging potential, possibly as long as 10-20 years.
The two most important tools in his wine making are water and sulfur dioxide. He always uses water in his wines to maintain the alcohol content. Sulfur dioxide is used to control other things, especially as a buffer for oxygen. But he also experiments with sulfur dioxide, sometimes not using it at certain times to allow his wines to be exposed to oxygen, to oxydize a bit.
Schoener also uses only wild yeasts, natural yeasts, though this adds an element of the unknown. You never know how long fermentation with those yeasts might take. It could be months or even years before it completes. He uses only French oak, though mainly used, neutral white wine barrels. He uses new oak rarely and always in a targeted way. Schoener feels that filtering can help or hurt a wine. It can be good sometimes to help stop malolactic fermentation. He feels it is best for lighter white wines.
His wines are not always food friendly and when they are, they generally need strong flavored foods such as beef and cheese. In a way, Schoener stated that he makes wines that go with cheese. That would certainly make for an interesting tasting, a wine and cheese pairing, to see which cheeses go best with his different wines.

"Quickly, bring me a beaker of wine, so that I may wet my mind and say something clever."
The Knights by Aristophanes
Abe Schoener is certainly a wine maker to watch, an experimenter who is crafting some unusual and delicious wines. In these days of huge corporations churning out wine that all tastes the same, we need to cherish those mavericks and individuals who walk their own path and create more unique wines. We need our Socrates to question the established wisdom and to show that there are different ways n wine making.

Tomorrow, I will post my reviews of some of his wines.
Posted by Richard Auffrey at 11:00 AM