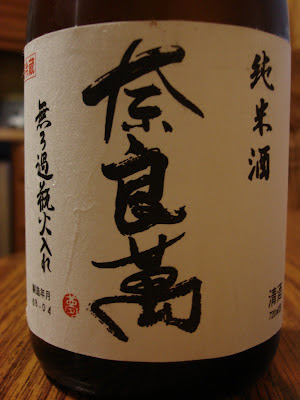 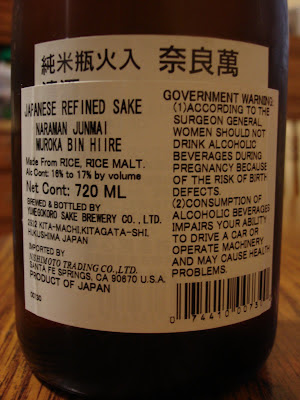 I opened the first bottle of Saké from the case that I recently bought at Sakaya in New York City. It was difficult to decide on which Saké to try first. In the end, I decided to go with the recommendation of Timothy of UrbanSake who stated one of his new favorites was the Naraman Muroka.

The Naraman Muroka Bin Hiire Junmai ($29.99 for 720ml) is from the Tohoku region of the Fukushima Prefecture. This area often has cold and snowy winters that make excellent weather for Saké brewing. Though it is listed as a Junmai, meaning the rice must be polished to at least 70%, the rice was actually polished to 55%. That means it could have qualified as a Ginjo but the brewery chose not to categorize it as such. The rice variety used was Gohyakumangoku and it also has an alcohol content of 16-17%. It also has a Saké Meter Value of +4, which means it is a drier Saké.
In addition, this is a "Muroka" Saké which means that it was unfiltered. Usually, Saké is filtered through carbon to remove potential contaminants that could adversely affect the smell and flavor. But, sometimes this process can remove good smells and flavors too. Muroka Saké potentially has a wider ranger of smells and flavors though it must be finely crafted or it could be ruined by contaminants.
The aroma of this Saké intrigued me with lush fruit flavors of peach and melon. But those flavors were very much in the background when I tasted it. The most prominent flavor was more a steamed rice, earthiness. It had a full body and was very smooth on the palate. When I concentrated more on the Saké, I could detect hints of other flavors, a subtle melange of complexity. Overall, a very pleasing Saké though probably not one for someone new to Saké. I think this would be a good Saké for food as well, as it is a bit rich and could stand up to many different dishes. At $30, I consider this a good value and recommend it as a Drink & Buy.
Now which Saké should I drink next?
Posted by Richard Auffrey at 6:00 AM

I agree with you 100% that the Naraman may not be the number one for someone just getting sake. However, for the price, Naraman is a great value and VERY food friendly and smooth. this kind of sake intrigues me, as I'm always looking for sake that will stand up to non-japanese foods... I think this is one of them. I'm glad you liked it!

Maybe for your next sake you could try the Kokuryu "Gohyaku Mangoku" Black Dragon Junmai Ginjo... this sake has fantastic Umami. OR the
Tsukasabotan Fu-in Junmai Ginjo “King of Peony” which is just SO well crafted! Which ever you pick, I know you'll enjoy.

I just took another look at your list and a lot of the sakes you selected are what I would call "not for beginners" I'm impressed with your selections and palate!

Hello Timothy!
Thanks for the compliment on my selections and palate. I chose Sakes at Sakaya that I wanted to try, stuff that intrigued me. I did not specifically seek Sake that beginners might enjoy, though that is something of concern of me on my blog.

I found that too many of my wine friends know little of Sake. So, I like to find Sakes that might appeal to someone new, to get them hooked on Sake. I want to share my own passion for Sake with others.

I don't want them though to try a more intense Sake as their first one, as that might turn them off to Sake. Same as I would not introduce someone new to wine to fine Bordeaux or Burgundy.

I would agree with you that the Naraman is very food friendly. And coincidentally, I am planning to drink the Black Dragon next, probably this weekend. Thanks for the tips.