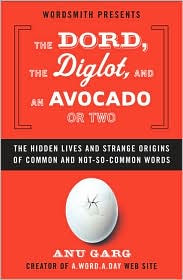 I have a fascination with the origins of words, as well as with unusual words. It amazes me the source of some words, the intricate path they follow to our current language. It can be interesting to see what certain words mean, or at least their original meaning.

That is why I recently purchased The Dord, The Diglot, and an Avocado or Two by Anu Garg. It is a fascinating book about the origin of a wide variety of words, including an entire chapter on food-related words.
Are you a deipnosophist? You probably would like to be one because it means a "good conversationalist at meals." Who doesn't want to be able to speak well at dinner? The term derives from two Greek words, deipon ("meal") and sophist (wise or clever man").
Have you heard of aristology? It has nothing to do with your sign or the stars (that is astrology). Instead, it means the "art or science of dining." It is another word that derives from two Greek words, ariston ("breakfast or lunch") and logy ("science or study").
Did you know the origin of the term avocado? It originally comes from the Aztec language Nahuatl where the term was ahuacatl, which means "testicle" as that is what they felt the shape of the avocado resembled. The Spanish adopted the word but changed it to aguacate. And that came down to us as avacado.
The cantaloupe melon derives its name from a papal villa, Cantalupo, located near Rome, where the melons were first grown in Europe.
Macadamia nuts were named after John Macadam, an Australian chemist of the 19th century.
For much more of these fun facts, check out this book.
Posted by Richard Auffrey at 6:00 AM