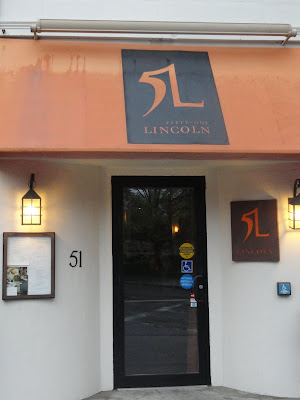 The suburbs often don't get enough credit for having some top notch restaurants. Boston and Cambridge garner most of the publicity, thus some of the best suburban restaurants remain largely hidden treasures, known mainly to locals or others in the know. I have to admit that I knew little of 51 Lincoln until very recently, when it seemed to pop up more and more in the news. But, it is well deserving of even more attention and gets my highest recommendation.

I recently ate at 51 Lincoln as part of a media dinner, and I will be hurrying back to experience even more of its cuisine.  The restaurant has been around for about five years and the owner/executive chef is Jeffrey Fournier, who previously worked at a number of top Boston restaurants, including Locke Ober and The Metropolitan Club. Local ingredients are emphasized and the restaurant even has a rooftop garden. 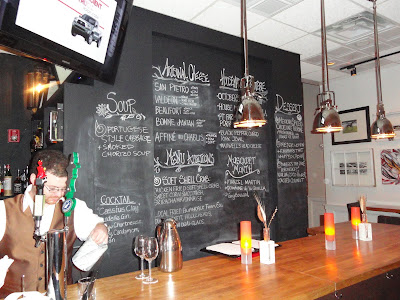 The restaurant is medium-sized, with a separate bar and dining area.  The dining area, which seats around 60 people, has wooden tables and chairs, with unique colorful paintings on the walls. At the bar is a blackboard listing food and drink specials. There is a casually elegant ambiance, and it would be a good spot for a romantic date, drinks after work, or just a dinner out with friends.

They have a full stocked bar, and make both classic and innovative cocktails.  The wine list has about twenty wines by the glass ($7-$14) and about 100 bottles (many $40+). The list has a good and varied selection of wines from all over the world, though I would have liked to see some local Massachusetts wines on the list. Restaurants that promote their use of local ingredients should also promote local wines, especially as there are some excellent Massachusetts wines that are now being produced. They carry a number of local beers so why not carry some Massachusetts wines as well?

I was intrigued by their eclectic menu with its mix of cuisines, including Italian, Latin, French, Thai, Cambodian and more. The menu includes Appetizers ($9-$12), Cheese & Charcuterie ($4-$5), Pasta ($9-$15/appetizer size & $18-$25/entree size), Entrees (most $22-$27), and Sides ($6).  The prices are reasonable for the quality of this restaurant. You can also order a three-course Prix Fixe menu for $35, which is a Chef's Whim menu meaning that the three courses depend on what the chef wants to prepare that evening.

Your dinner begins with a basket of various house-made breads, the types varying day to day, accompanied by oil with tomato chili jam and their house-made hummus spread. I really enjoyed the warm and moist corn bread, though I would have liked some butter to spread upon it. Neither the oil or hummus would have really enhanced the cornbread. The other breads were quite good too. 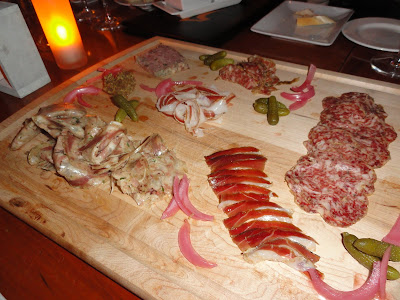 We started off with a platter of house made charcuterie, including pork salami, bacon chorizo, duck prosciutto, black pepper pork jowl, kidney terrine, and head cheese. They obviously are very passionate about their charcuterie, and you can even see a small refrigerator in the bar area where they keep and age their meat. I savored all of the various meats, with their vibrant flavors, and was especially delighted by the thinly sliced head cheese. Head cheese is often served in thick slices, and sometimes can contain gelatinous pieces which can detract from its taste. But these thin slices lacked that potential problem and provided only rich flavor. 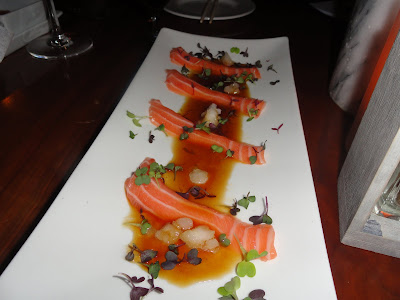 The Salmon Sashimi, farmed in Canada, came with ponzu sauce and microgreens and tasted very fresh, with a silky mouthfeel that nearly melted in my mouth. This was as good as anything you would find in a high-end Japanese sushi restaurant. 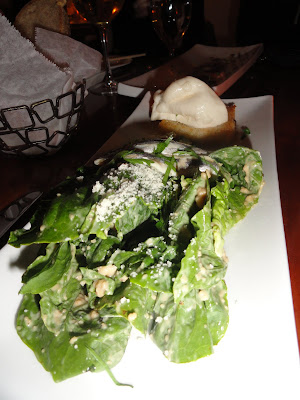 The Classic Caesar Salad ($11) had large, crisp pieces of fresh Romaine lettuce, topped by a light and flavorful dressing.  It was accompanied by a hunk of Fiore di Nonno Burrata atop a crunchy crouton. The Burrata had a firm exterior, hiding the creamy insides, and was very pleasing. 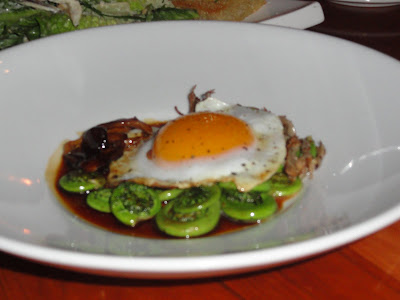 One of the specials that evening was a Duck Egg atop fiddleheads, duck confit, and mushrooms. Quite a savory dish with a nice blend of earthiness with tender duck meat and the gooey yolk of the egg. Why can't you find these duck eggs at most breakfast places? 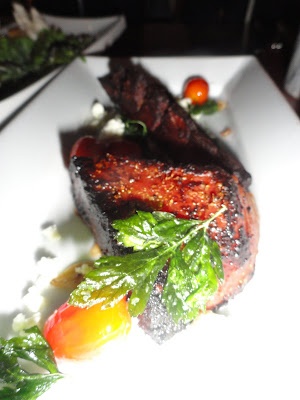 Based on the photo, you might think this is a piece of tenderloin yet it is not even meat. In fact, it is a Pan Seared Watermelon Steak ($11) with eggplant chicharron, confit cherry tomato, french feta, and fried parsley. When you slice it open, it resembles seared tuna and when you eat it, your taste buds explode in delight from its savory flavors.  Even tasting it, you would be hard pressed to identify it as watermelon. Frankly, it is compelling enough I would almost consider ordering it just as my entree.  This was clearly a "wow" dish, indicative of the chef's creativity. 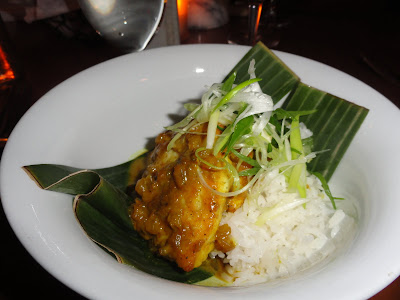 For my entree, I chose the Cambodian Fluke Amok ($27), which has jasmine rice, curry, lemon grass, ginger, and coconut milk. There were two large pieces of flaky, sweet fluke with a compelling and balanced Asian sauce, providing some additional sweetness but also some spicy undertones. An excellent dish, using a fish you don't often see on the menu. Three of us ordered the Amok and all of us enjoyed it. 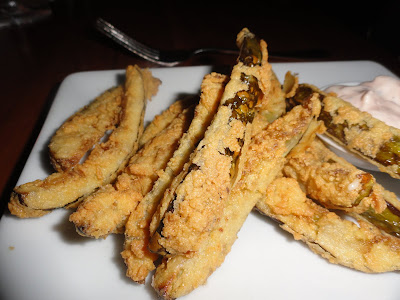 We tried a couple sides, both of which thoroughly impressed me. The Fried Housemade Pickles ($6), which come with a Remoulade, were probably the best fried pickles I have ever tasted. First, they possessed a light, crunchy coating and the pickles were moist and crisp.  Unlike many other fried pickles, these pickles were thinner slices, providing just the right amount of contrast for the coating and also preventing the coating from getting soggy. They were addictive and I could easily order them as an appetizer. 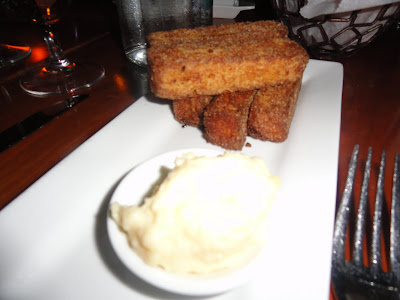 The Polenta Fries ($6) with a truffle parmesan dip, were also very impressive. Looking like French toast sticks, the thick fries had an excellent crispy exterior with a light and delicate corn-flavored interior. The dip was a rich and creamy spread that enhanced the polenta, and actually would have been great with the corn bread too. This would also make an excellent appetizer or bar snack. 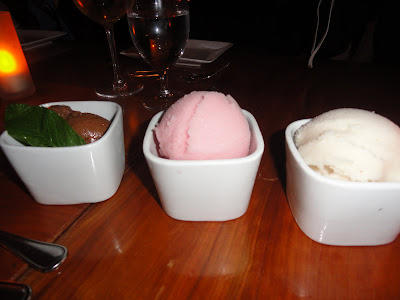 Though I had little room left in my stomach, I did have enough space to taste a few of their desserts. They make their own Frozen Custard, including Honey Lavendar, Chocolate Expresso, and Madagascar Vanilla Bean as well as their own Sorbet, such as Cinnamon and Cranberry. The custards were pleasantly creamy and both the custards and sorbet were certainly rich in their respective flavors. My favorite was the Vanilla Bean, with the Honey Lavendar a close second. 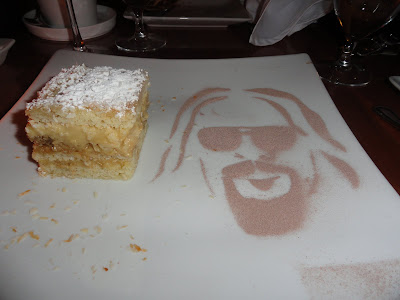 The "Where is the Cake Lebowski" is an homage to the movie The Big Lebowski, and consists of a white Kahlua cake, cocoa powder dust, and toasted coconut. Besides being a cool idea, the cake is also scrumptious, being moist and with a strong coconut flavor.

Service was very good, and my overall experience was excellent. It reminds me in some respects of Bergamot, its use of local ingredients, its artisanal foods, its innovative and delicious cuisine. 51 Lincoln offers compelling cuisine, reasonably priced for the quanity and quality, and it is a top notch culinary destination. I will be returning there soon, to partake of more dishes from their menu, as well as enjoying again some of my favorite foods.  My only regret is that I had not known of this restaurant before now.

Posted by Richard Auffrey at 4:05 AM