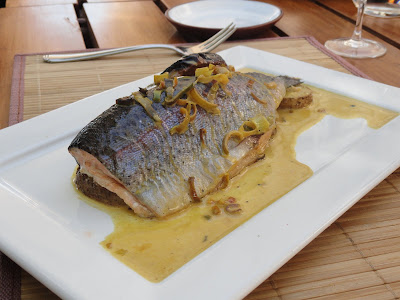 Can Roger Berkowitz be trusted?

On Friday, I posted my first follow-up, concerning Vietnamese shrimp farming, to the controversial dinner held at Legal Sea Foods, showcasing "blacklisted" seafood. I am back with another follow-up, to discuss Ocean Acoustic Waveguide Remote Sensing (OAWRS), a new type of sonar which Roger Berkowitz believes is the future of fish biomass assessments. At the dinner, the OAWRS system sounded very impressive, but it was the first time I had heard of the system so I wanted to do some more research, to get the facts from other sources.

Currently, fish surveys are generally conducted using a combination of trawling and conventional fish-finding sonars (CFFS). The maximum detection range for CFFS is basically only one kilometer from the survey ship, so it takes a long time to cover a large section of the ocean. Plus, as CFFS is generally incapable of differentiating fish species, trawling is a necessary adjunct. But trawling has had its share of problems, including the significant Trawlgate debacle, where NOAA admitted some assessments had been incorrect due to problems with the equipment they were using. Because of such issues, some factions have been calling for the use of new technology to assess fish biomass.

A team of researchers, from MIT and Northeastern University, backed by the Federal National Oceanographic Partnership Program, the Office of Naval Research and the Alfred P. Sloan Foundation, adapted a new sonar device, which had been developed to detect nuclear submarines, to assess fish biomass. This sonar system is known as the Ocean Acoustic Waveguide Remote Sensing (OAWRS). The team, led by Nicholas C. Makris, a professor of mechanical and ocean engineering at MIT, conducted field tests with the OAWRS in 2003 and 2006.

Both tests involved herring, the first test in the waters south of Long Island and the second in the waters off Georges Bank.  Results of the initial test were published, and peer reviewed, in Science Magazine in February 2006. The tests were quite successful, offering significant advantages over CFFS. One such advantage is that OAWRS can cover far more ocean than CFFS in a much quicker time period. As I mentioned, CFFS can cover maybe one kilometer out from the boat but the OAWRS can cover a 100-square-kilometer area in 75 seconds.  What a huge difference.  So, based on that alone, the OAWRS would be an excellent and more accurate replacement for CFFS.

But can OAWRS differentiate fish species, especially groundfish, thus eliminating the need for trawling? That is the major question about this technology and the answer is currently unknown. Nicolas Makris believes it is possible, but further testing is necessary. Yet it seems no one is willing to fund the testing, including NOAA. It has been estimated that such testing would cost about $1 Million, a relatively small amount considering the overall budget of NOAA. In the end, if the testing was successful, the OAWRS could save NOAA plenty of money, and provide far more accurate fish biomass assessments.

During the dinner, Berkowitz made it seem that the OAWRS was a much more successful system than the reality. He did not emphasize the uncertainty as to whether OAWRS could differentiate fish species. That is certainly a crucial issue which should have been stressed. The OAWRS is impressive and offers advantages over CFFS, and has the potential to be even more impressive if it can be proven that it can differentiate fish species, including groundfish. Thus, we should support further testing of OAWRS and NOAA should be willing to finance that testing.

I did inquire as to whether Legal Sea Foods would be willing to put up their own money for the OAWRS testing. They responded: "The government – and rightly so – has taken over the regulation of the fishing industry, thus the onus of responsibility is on them to ensure they are getting accurate assessments. Roger is trying as are others like Senator Kerry and Congressman Tierney to persuade them to finance the equipment. The government sets aside funding for assessments now, all they need to do is redeploy it. If funding came from private sources, there would always be the suspicion that the findings were slanted."

Better science can help seafood sustainability, but we must be willing to support research efforts, especially if they have such potential. During the 1950s, echo-sounders were used to detect fish but that sonar had its disadvantages. So, by the 1970s, side-scan sonars were used, improving on the past. By the late 1980s, this was replaced by multibeam sonars. It may now be the time for OAWRS to take over, leading the way to greater accuracy.
Posted by Richard Auffrey at 4:00 AM

I am dubious when anyone claims to have "the answer" as we heard at this dinner. Also the demonizing of NOAA gets us no where and there was plenty of that, too. Maybe Roger could host a roundtable of NOAA, Woods Hole, fishermen and conservation staff to explore this issue and technology? It does seem that enough people have a strong interest in finding out if this can be a tool in arsenal that maybe some joint funding could work.

Two things - the scallop industry did partner with science on HABCAM to study the scallop beds, and as a result, with the collaboration of Northeast Fisheries - areas were opened based on new video recording information.

Second - the video plankton recorders are able to identify plankton in the water column at micron size. The advantage to an autonomous vehicle is that it can continuously cover what no previous sampling system could do.

If you tow a plankton recorder for 260 hours of continuous recording, as it travels from depth to surface, undulating as it goes -- it can capture 6 images per second, and with the 4,000,000 images taken in those hours - image libraries are built. Then a pattern recognition system is built into the system that can recognize shapes, forms, identities, etc.

There are also autonomous systems, environmental samplers that sample and count according to DNA assays.

So is the technology there? I would say yes...it may be crude but it is existent and being developed. So in answer to who should pay for it - I'm with Jacqueline when she said it should be a partnership. If the government is charged with regulation of the species stocks, and is required to do so with the best science, then they should do so, WITH the help of fishermen who have been on the water.

I know too many fishermen who have worked to further along efforts who have not been paid, or recognized for their contributions. Somehow the system is going to have to find a way to unite fishermen and scientists to understand they have much in common. Alienating fishermen is the worst conceivable way for that to happen.