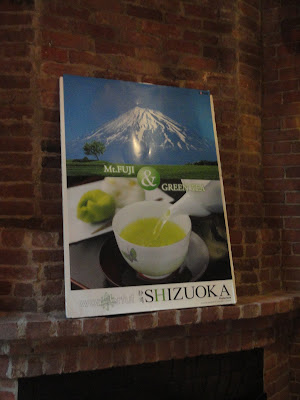 Come for the green tea and stay for the sake.

Recently, I attended a green tea seminar at the Itadaki restaurant in Boston, which was put on by some very nice people from the Shizuoka Prefecture, located about 110 miles southwest of Tokyo. The region was located on the Tokaido, the most important road during the Edo period (1603 to 1868), which joined Tokyo to Kyoto. One of the most well known and treasured landmarks in Shizuoka is famed Mount Fuji.  Probably the most famous product of this prefecture is green tea (of which I will discuss more in an upcoming post) though they also produce sake.

After the tea seminar, I grabbed a bite to eat and then returned to the restaurant as they were going to hold a sake tasting later. I had the opportunity to taste six Shizuoka sakes, which are probably not currently available in Massachusetts, and maybe not even anywhere else in the U.S.

Sake had never been a huge product in Shizuoka though the last 30 years have seen some significant changes and improvements to their sake industry. Much of the credit goes to Denbei Kawamura, who worked for the government, and can be considered the Father of the modern sake industry in Shizuoka. Not only did he work with the sake breweries to improve the quality of their products, but he also created Shizuoka HD-1, a special sake yeast which elevated the overall quality of their sake. The region currently has about 28-35 sake breweries and most of them are relatively small operations. 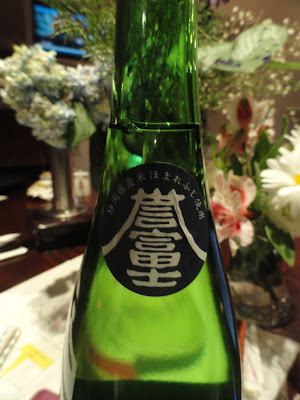 In 1998, the government of Shizuoka decided they needed to grow more of their own sake rice, so they began a study on creating a different form of Yamada Nishiki, considered the greatest of all sake rices. Their research led to the development of Homare Fuji, a sake rice with shorter and sturdier stalks, giving it better protection from harsh weather, and its rice kernels also contain less proteins. Approximately 31 farmers now grow Homare Fuji, and at least 20 Shizuoka breweries now use this rice in at least some of their sake. There is even a special label (pictured above), which resembles Mount Fuji, and which can be added to the neck of certain sake bottles that meet the standards for the use of Homare Fuji. Though all six of the sakes I tasted used Homare Fuji rice, one lacked the bottle neck label, though I am unsure why. 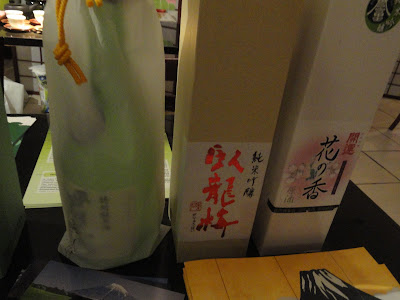 In general, Shizuoka sake is said to be generally low in acidity, light and easy drinking. It probably would be an excellent sake of which to introduce a newcomer to sake, who might be turned off by some of the strong flavors of some sakes. One of the most famous brands from Shizuoka is the Wakatake Onikoroshi "Demon Slayer," produced by the Oomuraya Brewery. I certainly loved their sakes, both the Junmai Ginjo and Junmai Daiginjos, and they are especially good value sakes.

As the six sakes I tasted do not appear available in the U.S., there appears to be little information available on them in English except for one blog, Shizuoka Sake: The Cream of Japan. This sake blog concentrates on the sakes of the Shizuoka region and has some pertinent information on all of these sakes. Thus, for each of the six sakes, I will be linking them to the blog post which describes the sake and/or brewery, where you can find additional information.

Of these six sakes, I enjoyed them all, and each presented its own unique flavor profile, though all use the same rice. They all were either Junmai or Junmai Ginjo, and they certainly were easy drinking, a style that even newcomers to sake would embrace and established sake lovers would savor. 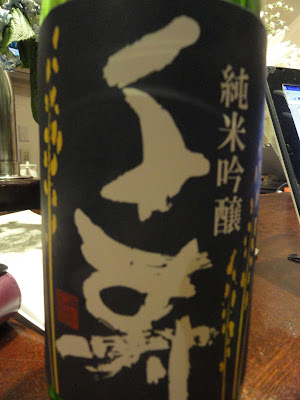 Senju Homarefuji Junmai Ginjo
This was my favorite of the six because of its complexity, smoothness and appealing taste. It had a bit of a floral nose with hints of fruit but on the palate the fruit was more prominent, plenty of melon, green apple and hints of citrus. It was soft, mellow and elegant with some intriguing nutty notes, especially on the finish. This is a bottle I could just sit and drink in its entirety, savoring each delightful sip. 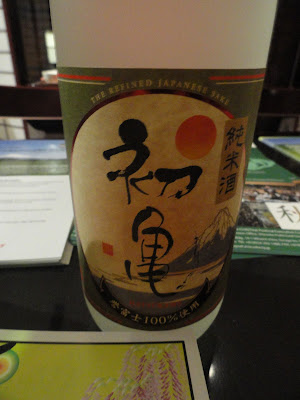 Hatsukame Okabemaru Junmai
This is a richer and more full bodied sake than the Senju, which you would expect as it is not labeled as a Ginjo. Interestingly though, the rice has been polished down to 55%, which makes it technically qualify as a ginjo though the producer chose not to label it as such. It possess ripe melon, pear and mild pineapple flavors, and also is smooth and easy drinking. It seems less complex than the Senju as well. 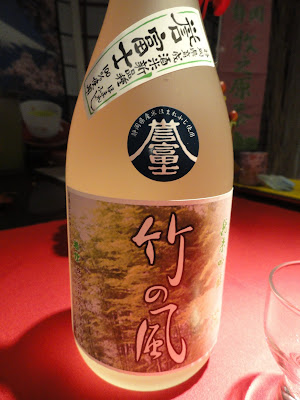 Oomuraya Takenokaze Junami Ginjo
From the producer of Wakatake Onikoroshi, this sake has much of the appeal of the Onikoroshi, a smooth and supple sake. The fruit flavors are a bit restrained allowing intriguing herbal notes to take more of the center stage. Its complexity is compelling and I would highly recommend it. 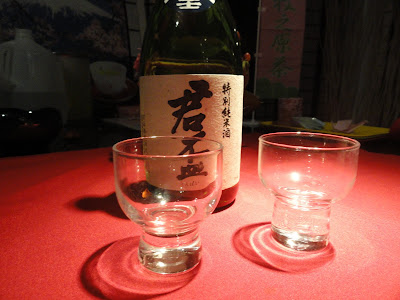 Kunpai Homarefuji Tokubetsu Junmai
As some people would say, this sake is "as easy to drink as water." It is silky smooth and mild with very subtle fruit and steamed rice flavors. Very elegant and restrained. Its apparent simplicity does conceal its greater depths. 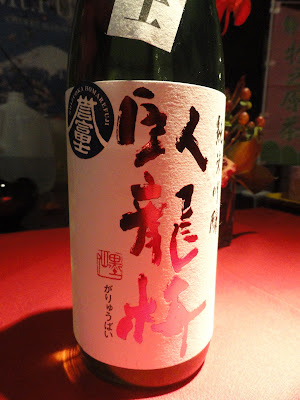 Sanwa Garyubai Junmai Ginjo
This is another sake where the herbal notes play a strong role in the taste, complementing the pear and melon fruit flavors. Though smooth and elegant, there is a bitter tinge to the finish, though not an unpleasant taste. This would be an intriguing sake to pair with food. 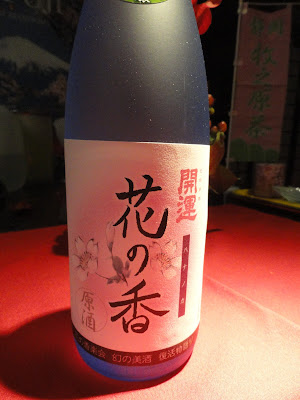 Doi Kaiun Hana No Ka Junmai Ginjo
This was an unusual sake, and apparently is made in a style that was previously produced 100 years ago and which was only recently resurrected. If I tasted this blind, I might think it was a wine as it presented with a strong red berry taste, and was almost sweet. It was very different from the other five sakes but as I don't know much about the style it is trying to replicate I cannot comment more. The trouble with not being able to read kanji.

If you get the chance to try some sake from the Shizuoka prefecture, I recommend that you taste them, and I bet you won't be disappointed.
Posted by Richard Auffrey at 4:00 AM