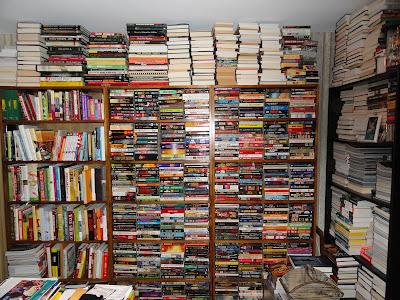 From Ernest Hemingway to F. Scott Fitzgerald, writers have often been fond of alcohol. I write and am no different in my love for alcohol, though my writing quality, including my short stories, is certainly not on par with men such as those. I guess significant alcohol consumption does not always transform into greatness. Besides writing, I also derive great enjoyment from reading the works of others and voraciously devour many a book. Above, you can see a small portion of my library, which now occupies two rooms in my home. Thanks to the iPad though, I can purchase ebooks and save lots of room in my house.

Because of my love for books and alcohol, I devised an idea to combine these two interests in a new series I call Authors, Alcohol & Accolades. In essence, I interview numerous authors, asking them to tell me their favorite wine, beer or alcohol. They say you can judge a person by what he eats and drinks, so this might give you a better insight into these authors. In addition, at least for now, the only authors that I will present will be those whose books I have read and enjoyed. These will be all authors that I recommend, who have penned compelling books which I am sure others will enjoy too.

So let's see what some of my favorite writers like to drink.

Jonathan Maberry (Twitter @JonathanMaberry)
Jonathan is relatively prolific and diverse, from writing Young Adult zombie novels to penning Marvel Comics. He is also very successful, being a New York Times bestselling author and receiving numerous acclaims for his work. I am a huge fan, finding his work to be very well written and usually completely riveting. His latest novel, Dead of Night, is a compelling zombie tale, one of the best of that genre I have read. His Joe Ledger series is action adventure at its peak, kind of James Bond meets the X-Files, and I eagerly await the fourth novel in that series. He has also written several horror-related non-fiction works which are also very interesting. Overall, I cannot recommend Jonathan's books enough.

Jonathan's preferences: "I’ve always been a whiskey guy. We’re Scottish, and I have uncles who are Scotch brokers. However I like cold whiskey and if I pour single malt over ice a thousand years’ worth of Highland ancestors will rise from their graves to kick my ass. That’s why I started drinking bourbon. Nobody starts a knife fight if you pour Knob Creek or Heaven Hill over ice. If all I can get is beer, then I love a cold schooner of Yuengling. It’s a fine Pennsylvania beer from the nation’s oldest brewery, and it’s as satisfying in the dead of winter as it is on at a barbecue on a sweltering summer afternoon."

Bernard J. Schaffer (Twitter: @ApiarySociety)
I first encountered Bernard's short story collection, Women & Other Monsters, and his twisted horror stories appealed to me, especially Cold Comforts, a chilling tale sure to get under your skin. That was followed up with his novel Whitechapel: The Final Stand of Sherlock Holmes, which pits Jack the Ripper against the famous detective in a gruesome and fascinating tale. Most recently, he has been the editor of Resistance Front, a collection of short stories from various authors, from professionals to newcomers, where all profits go to the National Center for Missing and Exploited Children. A great book, for a great cause, and for only 99 cents, it is also a steal. Please seek out all three of these books.

Bernard's preferences: "My drink of choice is beer. There is nothing better than sitting in a dark tavern drinking something cold from a tankard that is so big it takes two hands to lift. There is a more pure craftsmanship to beer, in that anyone can make it. You don't need a vineyard in Italy of rare grapes, you don't need aged oak caskets of bourbon inherited from the Duke of Wales. You just need a little ingenuity. A little effort. I will drink any beer, regardless of how strange it sounds. I've had pumpkin beer, strawberry beer, ginger beer, and every shade of light or dark. At present, I prefer Modello and Tsing-Tao. Last year it was Smithwicks (pronounced Schmiddicks). Sometimes, there is nothing better than a good old Miller Light, because that is what they serve at Citizen Bank Park, and it reminds me of being there."

Joseph Nagle (Twitter: @SterlingNovels)
In the tradition of Dan Brown and Robert Ludlum, Joseph has written two exciting novels in his Michael Sterling series, The Hand of Christ and The History Thief: Ten Days Lost. Both novels are packed with action and intrigue, a rollercoaster ride of adventure and espionage. The details appear well researched and there are interesting historical elements fueling the plots. If you want an adrenaline rush of excitement, check out both these books.

Joseph's preferences: "...my tastes are for inexpensive, oaky chardonnays. But truth be told, my favorite drink is said chardonnay with a splash of grey goose...call me crazy, but that's just me. I love the crisp cold of the oaky bite as it is followed by the clear burn of the vodka - a wonderful drink at the end of a hot, exhausting day."

Brett Talley (Twitter: @BrettjTalley) If you enjoy Lovecraftian stories about the Cthulhu Mythos, then Brett's first novel, That Which Should Not Be, should be on your reading list. Well written and suspenseful, this book would have made Lovecraft proud, delivering a carefully crafted horror story with the looming specter of Cthulhu. I have read tons of other Lovecraftian stories, and this is definitely one of the better ones. I look forward to Brett's future novels.

Brett's Preferences: "What's your favorite alcohol? Difficult question, and one that could be answered in a hundred different ways. None of them wrong. All equally defensible. But when I think of alcohol, I think of people. The bacchanalia is not a party for one, after all. Favorite alcohol? Bourbon. Makers Mark, if I am being specific. It permeates my past, present, and future. It was with me on hot, muggy college afternoons in the fall when football was in the air in Tuscaloosa, a pretty girl on my arm and bourbon and Coke on my lips. In sugary sweet Mint Juleps with lifelong friends at a Kentucky racetrack where the horses still run. On golf courses and sandy white beaches. At weddings, and yes, after funerals. It is the flavor of my adult life, the thread that runs through a hundred different gatherings, a thousand smiles, unending laughter. So it will continue until the day I die. And then, God willing, my friends will raise one last glass to me."
*****************************************************
You can also read the additional volumes in this series:

Thanks for the feature, Richard! Really enjoyed it.

Great feature! Your home library is most impressive . . . Cheers!