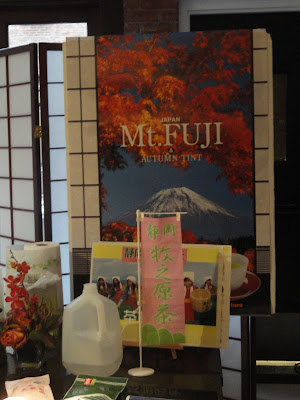 "You don't need to be a tea master to make good tea."

It seems that you once could only get green tea at Asian restaurants, but now, many other restaurants carry it as well. The health benefits of green tea have become more widely known, plus it simply tastes good. Recently, I attended a green tea ("ryokucha" in Japanese) seminar at the Itadaki restaurant in Boston, which was put on by some very nice people from the Shizuoka Prefecture. I previously discussed the Shizuoka sake tasting, and want to continue, detailing my experiences at their green tea seminar.

The Shizuoka Prefecture currently produces about 45% of Japan’s overall tea production, and they also are on the cutting edge of scientific research on the health benefits of green tea. In 2009, Shizuoka farmed approximately 19,200 hectares of tea plants and produced about 35,800 metric tons of tea. In comparison, Kagoshima prefecture, which occupies second place, has 8690 hectares and a production of 23,400 metric tons while Mie prefecture, in third place, farms 3520 hectares and produces 6510 metric tons.

Out of the over 80 cultivars that are used for tea, Yabukita is the most common, occupying 95% of the total hectares. In Japanese, "yabu" means "bamboo bush" and "kita" means "north." The name refers to when the Yabukita plant was first tested, as it was planted in an area surrounded by bamboo and one section of land in the north was apparently the best spot. Why is Yakubita so prevalent? Primarily, because the plant so easily can adjust to many different climates and soils while still producing an excellent tea. 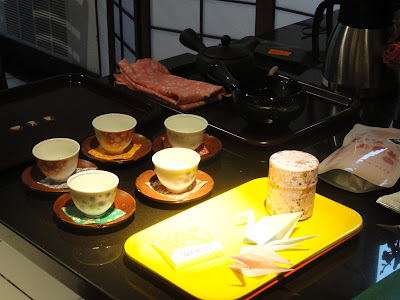 Though tea was known in Japan prior to the 9th century, it did not rise in popularity until the 12th century when a Buddhist monk, Eisai, brought green tea seeds from China to Japan. Initially, tea was viewed more as a medicine and was primarily restricted to the nobility, but by the 16th century, tea drinking had begun to spread to the common people.

Green tea plantations in Shizuoka date back at least to 1241, when a monk named Shoichi Kokushi returned from China to his native province of Shizuoka with green tea seeds, which were then planted in this area. Tea growing became economically important in Shizuoka in the 19th century, enhanced by its climate, water quality, and proximity to major sea ports.

About 68% of the tea produced in Japan is Sencha ("roasted tea"), while Bancha occupies second place at 20%.  Sencha is the first crop of the season while Bancha is a lower grade of tea made from mature leaves and stalks. A few of the other tea types include Genmaicha (bancha plus rice), Tamaryokucha (steamed and shaped) and Gyokuro (which means "jade dew," referring to the pale green color of the tea when it is in a cup.)  Gyokuro is also considered the finest tea in Japan. The place where the tea is grown matters, as green tea grown in the mountains is usually softer and milder while green tea grown on the plains is often stronger. 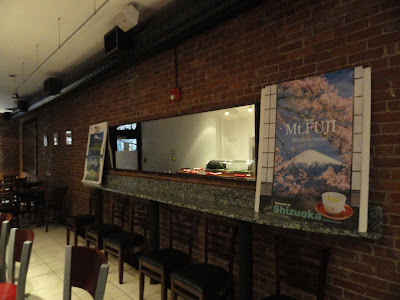 We learned the proper way to prepare green tea, and got to sample several different types.  To prepare your tea, first boil some water and then pour that boiling water into several tea cups. This will help reduce the temperature of the water as green tea generally needs a temperature lower than boiling to best highlight it. Then, place your green tea leaves in your pot, about one scoop per five cups, and pour the water from the cups back into the pot. The tea should then steep for a certain amount of time, dependent on the type of tea. The higher the quality tea, the lower temperature the water should be and the longer it should steep. For example, tea temperatures will vary from 122-212 degrees Fahrenheit and steeping time will vary from 30-150 seconds.

Besides the fine taste, why else drink green tea? Well, there have been plenty of studies indicating some very positive health effects from this emerald liquid. Some of these include reducing the possibility of dementia by improving impaired cognitive function, antioxidants to fight cancer, catechins to help reduce body fat, prevent arteriosclerosis, and reduce allergies, a reduction in diabetes and blood pressure, as well as stimulate metabolism. Almost seems like there is little it can't do, and green tea certainly should be a regular feature in your diet.

Instead of drinking green tea, you can also use it in cooking.  Usually, matcha (green tea powder), is used to make everything from green tea ice cream to green tea noodles. I have enjoyed some green tea foods before, and at the seminar, the pastry chef at Itadaki made three treats for your enjoyment. The green tea cake was the best, moist and flavorful, though I also enjoyed the green tea marshmallow star. In using green tea in your recipes, you are only bound by your own imagination.

Finally, let me broach a potential area of concern for some consumers of Japanese tea products. After the terrible tragedy, an earthquake and tsunami, which struck Japan in March 2011, the Fukushima nuclear plant sustained some significant damage. There were then concerns about radiation levels affecting local crops. Though there were some initial problems in Shizuoka with the tea crop, radiation levels have significantly dropped, and continue to decrease, and are now at safe levels. In addition, Japanese customs are helping to ensure that no products leave their shores which pose a danger to consumers.  So, there is no reason to avoid Japanese tea products.

Raise a cup of green tea, enjoy its flavor and reap the health benefits.
Posted by Richard Auffrey at 4:00 AM

Why is Yakubita so prevalent? Primarily, because the plant so easily can adjust to many different climates and soils while still producing an excellent tea.matcha powder where to buy perth

It seems that you once could only get green tea at Asian restaurants, but now, many other restaurants carry it as well. powder green tea perth