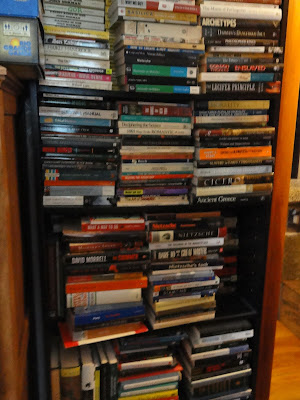 "Be wary of strong drink. It can make you shoot at tax collectors... and miss."
--Robert Heinlein

I am back with the sixth volume of my series, Authors, Alcohol & Accolades. Each of my prior volumes showcased four of my favorite authors, delving into their drinks of choice. I have found this to provide a fascinating glimpse into the life of the writers I enjoy, and hope you have enjoyed the interviews as well. I have returned to highlight more authors, but this time there is a twist. I am presenting four Book Review Bloggers, people who regularly review genre books, and seeking information about some of their favorite authors as well as their favorite drinks. I regularly read the blogs of these four people, finding some cool book recommendations, and I urge you to check out their blogs too.

You can look forward to further volumes in this series and any authors who are interested in participating in future volumes should contact me.

Authors: "My favorite authors are L. Ron Hubbard and Ayn Rand. Did I hook you yet? I'm not being serious, obviously, although I would argue both authors have far more to offer than the general reaction to work their work would lead people to believe. In truth my favorite authors are Joe Abercrombie and Don DeLillo. They're about as far apart as two writers can get and eerily similar in others. A lot of what Abercrombie does is grounded in basic human truths. He uses fantasy to do it. DeLillo is incredibly interested in today's truths and explores it in ways that are very now. Or rather, were now when he wrote them. That said, Frank Lentricchia in his New Essays on White Noise wrote, DeLillo uses "montages of tones, styles, and voices that have the effect of yoking together terror and wild humor". I can't think of a better way to describe Abercrombie than that."

Drinks: "And what cocktail calls to mind terror and wild humor better than red bull and vodka? It's not my favorite drink, but I've seen it have that effect on more than one occasion. I'd like to think DeLillo and Abercrombie could see the humor in being compared to a drink worshipped by sorority girls the world over. Since I try to avoid terror whenever drinking, and wild humor sounds exhausting, I prefer my drink to be a single malt scotch. And if I'm being picky, but not TOO picky, I'll cozy up with a neat Macallan 12. Stored in sherry and then oak casks, the Macallan has a flavor profile that calls to mind a full bodied red wine, which as a born and raised Californian I really gravitate toward."

Authors: "For me a favorite author has to be more than a passing fancy. So I am going to mention two authors who’ve had a huge impact on what I like to read. 1) Isaac Asimov. My brother is about a decade older than I. He shared his Fantasy and Science Fiction Magzines with me when I was little. I ‘borrowed’ Asimov’s original Foundation trilogy from my brother in the late 1960s. I still have the books – Foundation, Foundation and Empire, and Second Foundation so it appears we’ve moved from borrowed to own. Over the years Asimov wrote 4 more Foundation novels. He also formulated the First Three Rules of Robotics and wrote a mind-boggling number of novels, short stories, essays, etc. over an equally mind-boggling number of topics and themes both fiction and non-fiction. I have a deep abiding love for SciFi because of Isaac Asimov. He was my first. 2) Elaine Bergstrom. Her Austra Vampire series is wonderful. The first novel in the series, Shattered Glass, was published by Jove in 1989. There are 5 books in the series and Elaine is working on more. While Joseph Sheridan Le Fanu (Carmilla) and Bram Stoker (Dracula) sparked my love of vampire literature, it’s Elaine’s books that cemented that love. I had a serious fangirl moment when she accepted my request for an interview, which you may read here. I nearly hyperventilated. If you like vampire fiction, you really should hunt down the Austra Vampire series. It’s a beautifully written series with very memorable characters."

Drinks: "As for favorite alcohols… I'm presently a tea and coffee drinker. However, if we take the WABAC Machine (any Mr. Peabody fans?), my wines of choice were Chateau Larose-Trintaudon Haut-Medoc (red) and Cloudy Bay Sauvingnon Blanc (white), my spirit was Rebel Yell Kentucky Straight Bourbon Whiskey either neat or in a Bourbon Sour, after dinner drink was port (usually Krohn), and my beer-type beverages were Guinness Stout and John Courage Ale. Who wouldn’t like walking into a bar and saying “I’ll take Courage please”? I also used to combine the two to make a Black and Tan, the first of which I had in a pub in London a long time ago."

Authors: "Picking out just two favourite authors is pretty tough, given how many I read. Picking just two is like being asked to pick a favourite child... (I assume.) Hm. One of my favourite books, which gave birth to my initial love of reading, is James Clavell’s Tai-Pan – the story and characters make it a true historic epic, and I was hooked from the first page until the end (it’s a hefty book, too, which I read quite young). I’ve never read a historic novel that comes close to matching it in quality. Closer to the focus of my blog? That’s really tough, as there are so many fantasy, sci-fi and thriller authors I love. But, there is one book that really stands out: Scott Lynch’s The Lies of Locke Lamora was the book that made me dive back into fantasy in a big way – it was a revelation, as it adhered to none of the clichéd tropes that so plague fantasy in the general population’s imagination. It was thrilling, addictive, intriguing, clever, delightful, and changed everything for me once again. Other favourites include John Sandford, Aaron Dembski-Bowden, Brent Weeks, and Anne Rice (the first five Vampire Chronicles in particular). But even that only scratches the surface of authors I must read."

Drinks: "Now this question is a lot easier: Malbec Red Wine, preferably but not exclusively from the Argentinian Mendoza region. I didn’t used to like wine at all, until I went to Peru in 2009 and I was given a glass of Malbec. It was amazing – silky, smooth, low acidity, but not at all sweet. Since then, I’m always on the look-out for new Malbecs. It’s basically all I drink, if I can manage that. I’m not exactly a snob about it, though, as I’m willing to try any Malbec – from the surprisingly fine $5 Gato Negro that I can get at the nearest liquor store, to one of the more expensive (though not prohibitively so), incredible Dona Paula [photo attached]. On principle, I’m not comfortable spending a lot on wine – it’s not necessary to spend a huge amount to find a delicious Malbec. My favourite is Emilia [photo attached], which I’ve been known to describe as “satin in a bottle” and, after a few glasses, “sex in a bottle”... The first statement makes sense. The second doesn’t, but there we go. Malbecs are amazing and, I think, go with basically everything – but particularly well with red-sauce pastas and steaks. It also goes rather well with chocolate flavours, which was a nice surprise."

Authors: "Two of my favorite authors, that's a tough question. I'll just go with the authors of my two top novels of last year, and be done with it; Chris Wooding and Kameron Hurley. When I mention Chris Wooding, often the response seems to be "ah, the author from those YA novels, right?" Well, I haven't read any of his YA novels, but he also has some great books for the adult market. I've only read his Tales of the Ketty Jay series which I find to be incredibly fun, and awesome throughout. It has a good mixture of sci-fi and fantasy, with a great group of characters. If you're one of those missing Cowboy Bebop, Outlaw Star, or Firefly, then you can't go wrong with this series. Which brings us to Kameron Hurley's Bel Dame Apocrypha series, man it's certainly not a place you'd want to live in, but hell yeah I want to read about it. Hurley has created a very unique world, with bug magic and technology, violent and one badass main character. Her debut novel come out last year, God's War, and later this year we'll see the 3rd novel in the series, so a good time to catch up."

Drinks: "I've never been one to appreciate alcohol, but I sure like to drink. Drinking to me has always been for the purpose of getting drunk, so if I don't plan on getting drunk, I don't drink. And I don't drink while eating either. I'm sure I'm not alone in this. I'm solely a beer guy, and on occasions you can see me ordering a jar of sangría. As for beer, my first choice is always Budweiser, don't know why, but it's always been my partner in crime. On occasions I like to go to a local "tavern" where they have about 130 different kinds of beers, and it's incredible. High in alcohol concentration though, but expensive too, so those trips are not made often. For sangría I just like the mixture of bitter and sweet flavors, the key being finding a good bitter orange. Some use soda, like 7UP, but I'd rather do without it. Get a lot of red wine, some brandy, and vodka in it, and we're good to go."
Posted by Richard Auffrey at 2:00 AM

This was a lot of fun, thanks for the invitation.

My drinking is under control, I promise.