Moksa: A New Izakaya In Cambridge 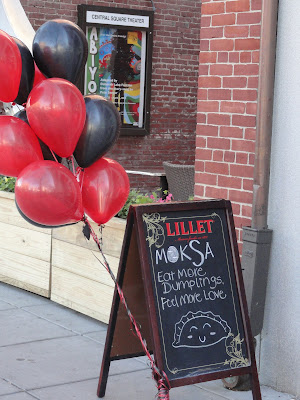 There are red balloons but where is the red lantern?

I have been eagerly anticipating the opening of Moksa, a Pan Asian izakaya, that is a joint endeavor between restauranteur Solmon Chowdhury (the owner of Om restaurant) and famed Chef Patricia Yeo. Chef Yeo has an impressive resume and first came to Boston as the chef of Ginger Park. Once Ginger Park closed, she became the chef at Om, helping to revamp its menu and kitchen. Now, she is bringing her skills to Central Square, Cambridge, to Moksa, which has only been open for a couple weeks.

What is an izakaya? The literal meaning of izakaya is a “sit-down-sake-shop,” though it now generally refers to a Japanese bar that serves any type of alcohol, not just sake, and also food to accompany that alcohol. Izakayas originated during the Edo period (1603-1867 AD) when sake vendors began to provide tables and seats for their patrons, and eventually started serving food with the sake samples. Izakayas are also sometimes known as akachōchin, which means "red lantern," because it is traditional to hang a red, paper lantern outside of an izakaya. Moksa though does not currently have a red lantern outside the restaurant.

What is Moksa? Much of the press about the restaurant equates moksa to "destiny." But, to be more accurate, it is a term in Hinduism which refer to the liberation of a person's soul from the cycle of birth, death and rebirth. It is considered to be a state of bliss, a salvation and freedom of the soul. It is an ultimate goal, a matter of great value. Drinking and dining at Moksa can be a blissful event. 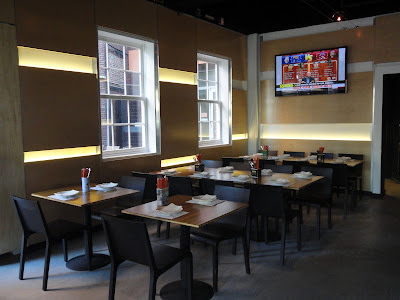 Moksa is located on Massachusetts Avenue, not too far from Rendezvous, and there is on-street parking as well as a few parking lots nearby. It is open seven days a week, for lunch and dinner, and dim sum brunch on the weekends. The restaurant is basically divided into three sections. Initially, you will find yourself in their bar, which also possesses several dining tables. The next room is then the main dining area, a long, narrow room, with a simple decor. Finally, in the back is their lounge, Naga, which has a long bar and where music and other entertainment takes place. 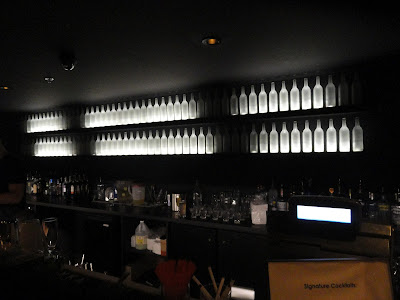 I recently attended a media party in Naga, where we received complimentary cocktails and some passed appetizers. With the music booming through the darkened room, it was difficult to get a good look at the food and was tough to hear the complete explanation of the dishes from the servers. My main takeaway was that the food seemed tasty, and that the cocktails were quite good. Thus, my friend Jackie and I decided to leave the party and grab dinner in the main dining area.

What is a Naga? Most of the press refers to naga as a "dragon" but in fact that is not a completely accurate translation, as much depends on the context. In Hindu and Buddhist mythology, nagas are generally serpents with mystical powers, some being able to shape change into human form. Some naga possess vast magical powers, putting them on the level with other deities. In other Asian traditions, nagas are sometimes equated to dragons, though even the type of dragon can vary, from a multi-headed dragon, similar to a hydra, to beaked water serpents. In Chinese mythology, dragons represent good fortune. 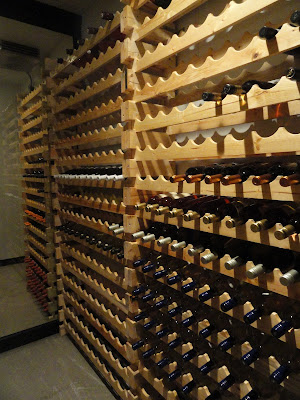 The beverage program at Moksa was created by Noon Inthasuwan, a Certified Sommelier who has previously worked at Om and Umami, and it is a major strength of the restaurant. If you enjoy wine, beer, sake or cocktails, then you are going to find plenty to like here. For example, you will find 12 beers on draft, 13 in the bottle and 2 in cans. That presents plenty of diversity in this izakaya.

Noon has compiled a diverse and exciting wine list as well, including about 20 by the glass (most costing $7-$9) and 40 by the bottle (nearly all under $40). A number of the wines are noted as being biodynamic, organic, or sustainable. There is a good diversity of wine regions, from Massachusetts to Greece, from Portugal to Lebanon. There is also an intriguing group of grapes, including Gruner Veltliner, Zweigelt, Xinomavro, Roditis, and more. in addition, you will find Fino Sherry, Madeira and Port. This is a well constructed wine list. 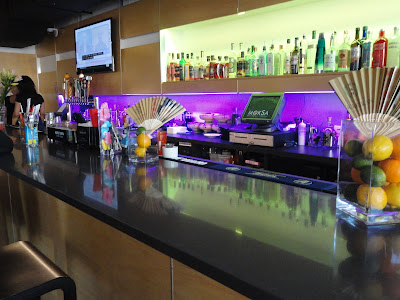 This is a photo of the bar from the front area of the restaurant, a cool place to have a drink and a few small plates of food. 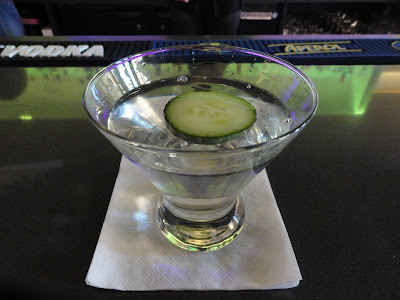 Their special cocktail list is compiled into a Chinese Zodiac, with each animal representing a different main ingredient and specific cocktail ($9-$11). For example, the Dragon represents vodka, and the cocktail is the Snap Dragon, made from vodka, pear liqueur, habanero vinegar & aromatic bitters. The Monkey represents brandy, and the cocktail is the Shanghai Noon, made from brandy, gun powder bitters, and tea smoked sugar cubes. They also offer Four Elements (Earth, Water, Fire & Wind) which constitute a Shot (from sake to bourbon) and a Miller Lite.

Pictured above is the Silver Peony, a cocktail made from a Junmai Sake infusion, cucumber, lavendar and silver needle tea. This is a very clean drink, with subtle flavors of cucumber, floral and green tea, and showcasing the sake. It is more a savory drink, the type that I enjoy, rather than the sweet cocktails which are often more popular. I also drank a Naga Chiller, which is made from tequila, green tea, Tio Pepe fino sherry and sours. Again, this was a more savory cocktail, with an intriguing melange of flavors which complemented each other, no single ingredient overpowering any other. 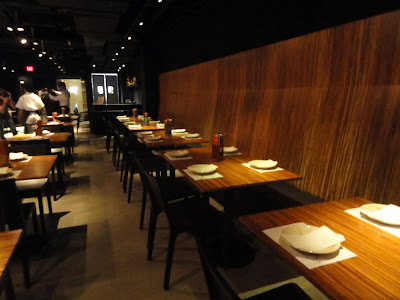 This is a diverse and intriguing menu of small plates that are meant to be shared, and I am a big fan of the small plates concept. I love being able to taste a wide variety of dishes. The cuisine represents a number of Asian cultures, from Japanese to Korean, and they have an adventurous menu, including such more unusual items like duck tongue, chicken hearts, snails and more. In addition, there are plenty of vegetarian options so everyone should be able to find something to please their palate.

We tried five different dishes, all of them delicious, and overall I was impressed with the quality and taste. The Berkshire Pot Stickers ($8) were fried just right, with a nice crispness to the dumpling which was filled with plenty of flavorful pork. They didn't skimp on the meaty filling. The Kara-Age: Japanese Style Fried Chicken ($8) thoroughly impressed me, with its think, moist white meat chicken surrounded by a thin, tasty coating. They were like large, boneless chicken nuggets, created by a very skilled chef, and were some of the best Kara-Age that I have tasted.

The Corn Roti with Miso Braised Shortrib & Pickled Vegetables ($8) were like Asian tacos, with tender & sweet meat contrasted with the light sourness of some pickled veggies. The roti was soft, with a strong corn flavor, and it seemed very fresh. The Grilled Chicken Skin with Yuzu Vinaigrette ($4) was a delightful skewer of crisp skin with a slight amount of fat for additional flavor. The Yuzu added an interesting citrus accent to the chicken skin. Finally, we ended with the Grilled Silk Road Lamb Meatballs ($5), another winning dish, with tender, flavorful meat topped by an intriguing and earthy sauce.

We drank a bottle of the Manabito Kimoto Junmai Ginjo with our dinner, an excellent pairing for the different plates. The umami of the Sake went well with the umami of our foods. Give this Sake a try.

Service was very good and the restaurant was quite busy, despite it being a weeknight, though that might also be because they are new. It seemed to be running well, despite being only recently opened, and restaurants usually need a few months to work out all of the kinks. Mosca already seems to be in an excellent groove, which bodes well for the future. I felt that the food was reasonably priced for its quality and quantity. As as they are small plates, you have lots of control over how much you choose to spend.

I am very eager to return, to try more of their different dishes, and drink more Sake. And probably will be stopping by there later this week. Chowdhury, Yeo and Inthasuwan have created a compelling destination and I highly recommend that you check it out.

Great review, I am really looking forward to trying this addition to my neighborhood! It's also very nice that they serve food so late - until 1 am!

Very exciting news, and a must-try next time I am in Boston...may even require a special trip. The folks at the dojo in Somerville will certainly be happy to hear this.

Hope you both enjoy! I will be back there on Thursday, and will report more.

I've been there twice, and while the food is just okay, the drinks are creative and deserving of any praise one might heap upon them. Noon is personable, affable and modest! The one major criticism I have of the place is the name. Moksa and Om, both restaurants owned by Solmon Chowdhury make use of terms considered sacred to the Hindu religion. I am a follower of Hinduism. Mr. Chowdhury is Moslem from Bangladesh. I wonder how he'd feel if I opened a restaurant and called it Mohammed's Cave or Mecca or just the word Mosque? It is not OK to use spiritual symbols of someone else's religion to make money for yourself. I am offended! If I were to open a bar and call it Mosque you can bet the Moslems would be offended and I would be executed without a second thought. Say NO to the use of spiritual terms like Mosa and Om and Mantra in the names of drinking establishments. It's repulsive.

wonderful blog and hope you both enjoy! I will be back there on Thursday, and will report more.thanks

Mr. Auffrey, please disregard the rantings of Anonymous. That was actually me when I was drunk. I applied to work there and didn't get called back. I'm sure they had their reasons, but I was looking forward to working with them. They've got a great concept! So forgive me! I'm not really even Hindu. It was kind of a joke that's only funny when you've been drinking, you know?