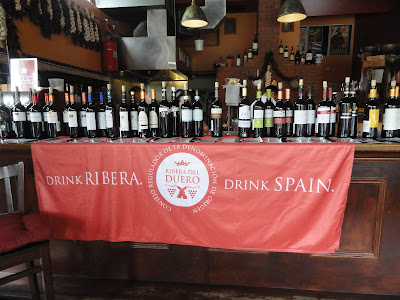 As I mentioned in my Rant yesterday, I attended a "food pairing seminar" led by Drink Ribera, showcasing Spanish wines from the Ribera del Duero region. The event was held at Taberna de Haro, an excellent Spanish restaurant in Brookline. I had some concerns that the event would fail to reach its potential, that pairing Spanish wines with Spanish cuisine was too obvious a choice and that it would have been more educational if a different cuisine had been involved. That is largely what occurred.

The "food pairing seminar" was actually more of a broad overview of the Ribera del Duero region and its wines. That was certainly educational, though not quite expected. For those unfamiliar with the wines of this excellent Spanish region, it was a great introduction. I was intrigued to learn that climate change has not been a major factor in this region as its higher altitude has minimized the effects of climate change. But I was hoping for a more in-depth discussion of the versatility and flexibility of these wines with a variety of different cuisines. 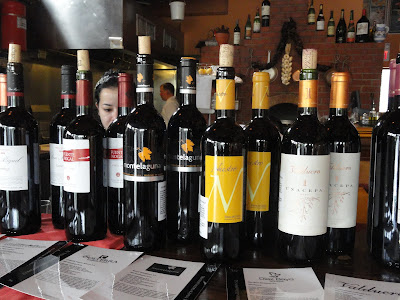 Information on food pairings with Ribera del Duero wines was very limited. The informational booklet we received had nothing on food pairings, and there seemed to be but a single slide in the formal presentation that addressed that topic. We were given some suggestions on pairings for the following wine types:

The seminar included a pairing of three wines types, Joven, Crianza and Reserva, with three courses of Spanish dishes prepared by Chef/Owner Deborah Hansen.  The brands of the wines were not identified so that we could concentrate on the style rather than the producer. The types are differentiated by their amount of aging. Thus, the Joven, with the least amount of aging, is more fresh and fruity while the Reserva, the longest aged, has more spice elements and the fruit notes are a bit more restrained.

Much of our fare was simple yet fresh and delicious, the high quality cuisine that I have come to expect from Chef Hansen. Each of the three courses came with two dishes (or a bowl) of food. All of the dishes went well with the wines, though that was not really surprising, except for one of the first dishes. It is surprises like that first dish of which we needed more. To make Ribera del Duero wines more mainstream, they need to be presented in every day situations, with foods like pizza, burgers, steaks, pasta and even Chinese food. As I said previously, Drink Ribera should not have gone for the obvious, but rather used this opportunity to think outside the box and pair their wines with a much different cuisine. 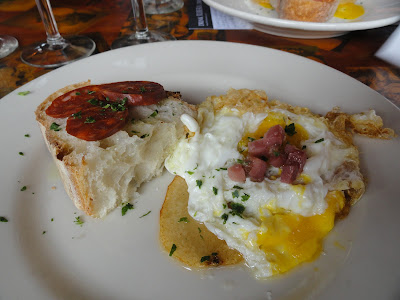 The first course, paired with the Joven, presented the only surprise of the event. Beside the spicy chorizo atop the country bread that was drizzled with olive oil, we also had "crashed" eggs, thinly sliced fried potatoes and jamon. Red wine with breakfast food? Yes, it worked, the fruitiness of the wine making a nice companion to the eggs, potato and ham. That is thinking outside of the box and I suspect that was due to Chef Hansen. 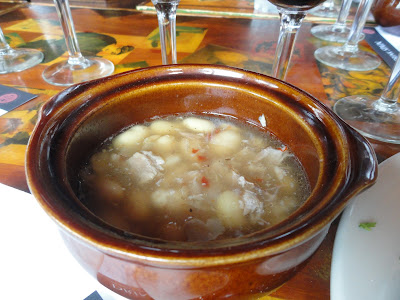 This initial course also came with a bowl of simmered white beans with shreds of pork rib. The tender beans, savory broth and slightly salty pork combined for an excellent melange of flavors. It too went well with the young Joven wine. 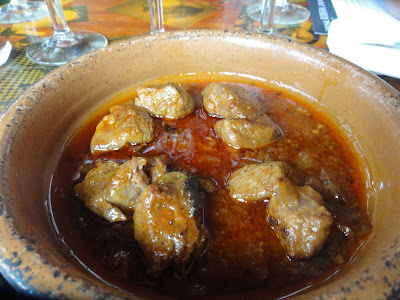 Maybe my favorite dish to the lunch was during the second course, pairing with a Crianza, the braised lamb with peppers and jamon. The chunks of lamb were extremely tender, easily flaking apart, and had such a savory taste, accented by the sauce. A hearty dish that satisfied the carnivore within me. This was also a perfect choice for the Crianza, which presented a bit of a more rustic style with added spice notes. 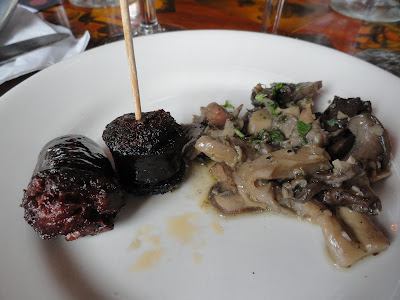 With the lamb, we also had some morcilla (blood sausage) and oyster mushrooms with garlic. I do enjoy morcilla so this was a pleasant treat, and they certainly go well with a Spanish red wine. 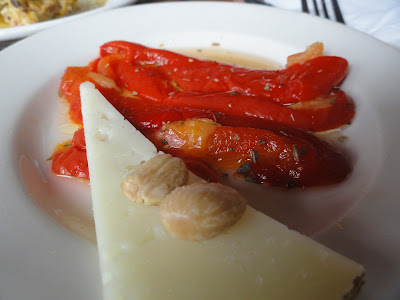 For the final course, we began with some roasted red peppers and Zamorano cheese topped by a couple Marcona almonds. Like Manchego, it is a hard, sheep's milk cheese but it has a more tart flavor, and was a touch creamy as well. The peppers seemed fresh, with a nice crispness still to them. The Reserva, with its Old World style, was a nice pairing. 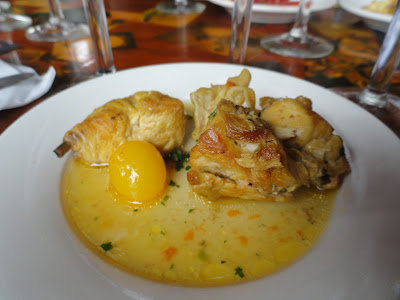 The braised hen with saffron, fresh thyme, and a pearl tomato was tender, moist and flavorful. The meat easily came apart and was not over powered by the Reserva wine. Another delightful dish.

Kudos once again to Chef Hansen for a delicious meal, and I continue to heartily recommend that you check out her restaurant Taberna de Haro.

As for more nontraditional pairings for Ribera del Duero wines, I will work on a future post to provide some suggestions.
Posted by Richard Auffrey at 4:00 AM

As a non-red-meat eater, I am always looking for more creative pairings for wines like Ribera -- hope you do that post!