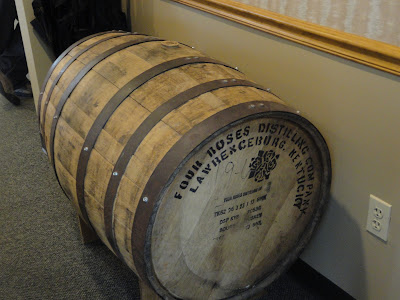 As I mentioned previously, most bourbons are blends, and that applies even to "Straight" bourbons. How can that be so? Though it may seem confusing, it really is not. Legally, a straight bourbon cannot have any additional flavors, colorings or other additives added to it. But, you can still blend bourbons from different barrels, as long as no additional items have been added to any of those bourbons. So the "straight" refers more to its purity rather than whether it is blended with other bourbons or not.

Two relatively new terms you may see on a bourbon label are "single barrel" and "small batch." Neither has a legal definition though basic definitions can be ascertained. A "single barrel" derives from a single barrel of bourbon, which has not been blended with any other barrel. Thus, there is a very limited amount of that bourbon available. As it is a single barrel, its flavor profile will be unique, and may bear slight differences from other bourbons from the same distillery. A "small batch" means a bourbon that has been blended from a small number of barrels, though that number will vary from distillery to distillery. It is supposed to provide a better and more unique product, though more of it is usually available than a single barrel. 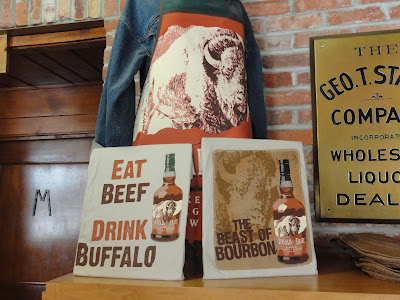 If you order bourbon at a restaurant or bar, you have several choices as to how it will be served. You might choose a bourbon cocktail, such as a Bourbon Manhattan or a Mint Julep. For high end bourbons, you might prefer to have it "neat," meaning that it is served at room temperature without any ice or other accompaniments. Just you and your bourbon, an intimate relationship. Instead, you could order it "straight up" which often means the bourbon has been chilled with ice, either shaken or stirred, and then strained into a glass. Though note that some places consider "straight up" to be the same as "neat." If in doubt, explain your desire. Finally, you can have it "on the rocks," a glass of bourbon with ice in it.

Much of the bourbon you find will generally be 80-100 proof, which is a significant amount of alcohol so you always should take care when drinking it. You can even find some bourbons that are over 100 proof, though those are rarer. When tasting bourbon, you will usually note the heat and burn from the alcohol, and the amount of such will vary from bourbon to bourbon. Though few talk about it, that heat and burn are a major element of bourbon, and one you must come to grips with if you desire to appreciate bourbon. It can be disconcerting to someone who has little experience tasting spirits. So either learn to adapt, or you may want to choose another beverage. 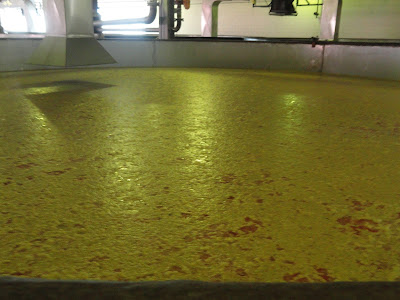 During my time in Louisville, I managed a taste a fair amount of bourbons, most neat, especially some of the higher end offerings. Many places offer bourbon flights so you can try three different bourbons at once, sometimes in half ounce pours, which are a nice size for tasting. The flights often have themes, and allow you to compare and contrast similar bourbons.

The first bourbon I tasted on my journey was the Elmer T. Lee Single Barrel Kentucky Straight Bourbon (90 proof) and it set the bar high for the rest to come. Incredibly smooth, with a complex melange of vanilla, honey, butterscotch, dried fruit and mild spice notes. A great sipping bourbon, and I brought a bottle back home with me. The Blanton's Single Barrel Bourbon (93 proof) was also very smooth, though less sweet than the Elmer T. The vanilla notes were subdued and there was more of a citrus profile, with nutty hints. Excellent for sipping, especially if you want something a bit less sweet.

The Old Rip Van Winkle Distillery produces some of the most expensive and most sought after bourbons. They can be very difficult to find, and most places sell out of them as soon as they arrive. At the Limestone restaurant, I had a flight which included the Van Winkle Special Reserve (12 years old, 90.4 proof), the Pappy Van Winkle's Family Reserve (15 years old, 107 proof) and the Pappy Van Winkle's Family Reserve (20 years old, 90.4 proof). The Van Winkle portfolio also includes a 23 year old Reserve. All three were very different from each other, and the 12 year old seemed to be a smoky version, with burnt caramel and vanilla notes. The 15 year old was all about the spice, with an intriguing complexity, one to slowly savor after dinner, marveling at everything to be found within your glass. The 20 year old went more for subtlety, equally as complex but more subdued, more of a contemplative bourbon. Well balanced, interesting and compelling. At the Jockey Silks Bourbon Bar, which has a superb selection of bourbons, I tasted numerous interesting bourbons. The Eagle Rare Antique (17 years old, 90 proof) was silky smooth with a delicious palate of caramel, honey, tea, vanilla and cinnamon. The Hancock Reserve was very different with an unusual herbal/spice flavor that I could not identify. I am indecisive whether I liked the flavor or not, but it was very different. The Bookers 121.4, produced by Jim Beam, may have a high alcohol content, but it is not really noticeable as such, with its combination of smoke and spice and hints of other flavors permeating this fascinating bourbon.

The Elijah Craig 18 Year Old was exceptional, an alluring bourbon with rich depths of flavor and complexity. It seduced my palate, making me crave even more. The Woodford Reserve Double Oaked is unusual in that the bourbon is finished in a special, second white oak barrel that has been heavily toasted but with a minimum char. This did give the bourbon a more toasty profile, with plenty of spices and herbal notes. The 2011 Old Forester Birthday is another unique bourbon, vintage dated from a specific date of production. It was bold and spicy, with very subdued, almost elusive, notes of vanilla and dried fruits. 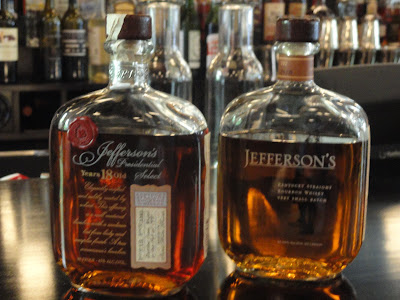 Bourbon even has its own holiday now, and not just a single day. In August 2007, the U.S. Senate passed a resolution, sponsored by Senator Jim Bunning (R-KY), that declared September 2007 to be "National Bourbon Heritage Month." A similar resolution has passed each subsequent year so we can look forward to September 2012 being another National Bourbon Heritage Month.

But please don't wait until September to explore bourbon. Get out there and learn more about it, taste a bunch of bourbons, use it in cocktails, and use it in recipes. You will find plenty of diversity in bourbon, and it is a versatile alcohol. Expand your palate and enjoy a fine Kentucky made bourbon.
Posted by Richard Auffrey at 4:00 AM