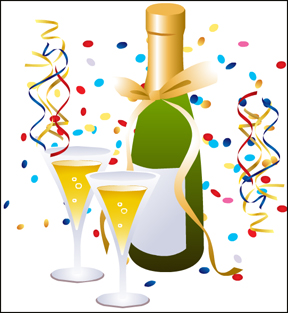 With New Year's Eve around the corner, Sparkling Wine takes center stage, including Champagne, Prosecco, Cava and domestic bubbly. Some people are willing to splurge on pricey Champagne while others are more frugal, seeking inexpensive, value sparkling wines. One excellent value option, which may be overlooked by the average consumer, is Crémant d'Alsace.

In the Alsace region of France, they have been producing sparkling wines since the early 19th century but it was not until 1976 that the Crémant d'Alsace AOC was created. Back in 1979, their total production was less than 1 million bottles but that has now increased to around 33 million bottles. The term "crémant" basically means "creamy" and originally referred to sparkling wines that were produced with less pressure, which tended to make them taste more creamy than effervescent. There are six other Crémant AOCs in France, including Bordeaux, Bourgogne, Die, Jura, Limoux and Loire.

Crémant d'Alsace is produced in a similar fashion to Champagne, though there are some differences as well. The Crémant d'Alsace AOC has strict regulations on viticulture and viniculture, and six grapes are permitted including Pinot Blanc, Riesling, Pinot Gris, Auxerrois Blanc, Chardonnay, and Pinot Noir. Most of their Blanc de Blancs is made from Pinot Blanc while Pinot Noir is the only grape permitted in their Rosé. For those who want value, Crémant d'Alsace usually sells for $10-$20, making it very affordable. But what does it taste like?

Based on my recent experiences with several Crémants, they generally seem to be more Old World in style, with restrained and subdued flavors. They generally don't possess bold fruity flavors like Prosecco and Cava, and are more dry, crisp and clean. They are refreshing, excellent with food and offer good complexity at their price point. I want to review two Crémants I recently enjoyed around the Christmas holiday (both being media samples) and I'll be discussing more Crémants in the near future. In short though, consumers should be seeking out Crémant d'Alsace if they want an excellent value sparkling wine. 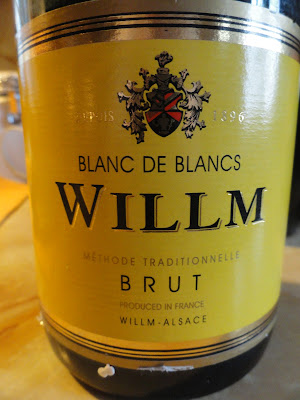 The Willm Crémant d’Alsace Blanc de Blancs Brut NV ($13) is produced in a winery that has been around since 1896, and their wines were the the first Alsatian wines imported into the U.S., in the early 1930s, just after Prohibition. This Crémant is made from 100% Pinot Blanc. using the méthode traditionnelle. Crisp, dry and fresh, it possessed pleasant tastes of green apple and pear. A refreshing bubbly, it made for an excellent apertif as well as an accompaniment to some pre-Xmas dinner appetizers, including cheese. At this price, I strongly recommend this Crémant. 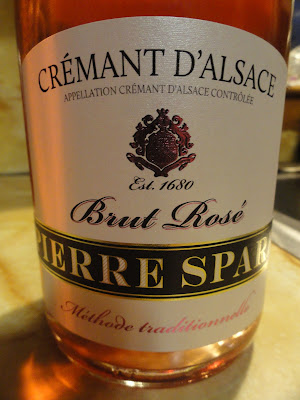 My favorite of the two wines though was the Pierre Sparr Crémant d'Alsace Rosé ($19). The winery extends back to 1680 so it has a long, rich history, making a comeback after being nearly destroyed during World War 2. This wine is produced from 100% Pinot Noir and is aged for about 12 months on the lees. It has a rich and vibrant pink color with a compelling nose of red fruits. The red fruit flavors, strawberry, cherry and hints of watermelon, are more subtle on the palate with mild accents of peach and minerality. Clean, crisp and dry with a pleasing finish. It reminded me of a delicious Provence Rosé and was a fine choice for my Xmas Eve dishes. Highly recommended for year round pleasure.
Posted by Richard Auffrey at 3:00 AM