What do all five of these have in common?  I would learn that fascinating answer on a recent Monday evening as I drank some Alsatian wines with dinner.

At Island Creek Oyster Bar, I dined with Pascal Schiele, the Export Director of Gustave Lorentz, and Matt Demers of Quintessential Wines.  It was a fun, tasty and informative experience as I got to sample and learn about the Alsatian wines of Gustave Lorentz winery. This winery is making a new marketing effort in Massachusetts, and based on what I tasted, these are wines that you should place on your radar and seek out. For some background on Alsace, please check out my prior post concerning an Alsatian wine dinner.

The Gustave Lorentz winery, with a history extending back to 1836, is situated in the village of Bergheim in central Alsace. It remains a family winery, now in its sixth generation, and they currently have about 85 acres of vineyards on the hills of Altenberg de Bergheim, 4 acres planted on the hills of the Grand Cru Kanzlerberg and 30 acres in the Grand Cru Altenberg de Bergheim. The winery also purchases grapes from other vineyards, mainly in Bergheim.

Interestingly, the average cost of a vineyard in Alsace is the second highest in France, lower only than Champagne. Alsace vineyards, on average, are even more expensive than those in Burgundy or Bordeaux. Despite this high expense, Alsatian wines are not unduly expensive and you will find plenty of good values. Maybe certain regions in California, with expensive vineyard land, could take some lessons from Alsace in this regard.

As of 2012, Lorentz now has a significant portion of their vineyards certified organic and will soon be releasing a number of organic wines. Approximately 50% of their production is sold within France, mostly to restaurants, but that is going to change as French wine consumption continues to decrease. In response, the winery has been seeking markets elsewhere, to boost their exports. To bottle their wines, they use a combination of corks and screwcaps, and their high end wines use only cork as they don't feel they have sufficient experience with screwcaps for those wines. Their corks cost $1 each so definitely are not cheap.

They export to about 55 countries, making them the second largest Alsace exporter in the world. At this time, they sell about a dozen wines in their portfolio in the U.S., and 7 of those are available in Massachusetts (a few never before having been available here). Overall, their wines can be found in about 30 states and they are continuing to expand their distribution. Their U.S. distributor, for the last three years, has been Quintessential Wines. In the near future, they may start selling some of their Single Vineyard and Grand Cru wines in Massachusetts. 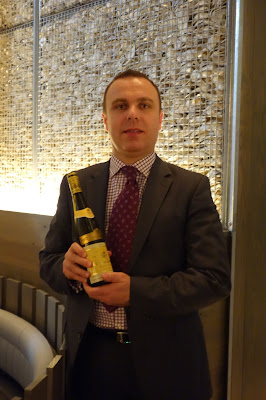 Pascal Schiele, pictured above, was born in Alsace and has deep roots in the wine industry. His great grandfather and grandfather were winemakers and two of his uncles are still winemakers. Pascal has desired to join the wine industry since he was a young boy. He never wanted to do anything else and his passion for wine was deeply evident at dinner. Pascal began in the wine exporting business in 1996 and joined the Gustave Lorentz winery in 2001.

During the evening, I asked Pascal what question that no writer had ever asked him before, and which he wishes they would, and his response was quick: "What color blood do I have?" An odd question to be sure, yet the answer resolved much. Pascal stated that his blood is white, because he has Riesling running through his veins. That is his favorite wine, that which most excites him. He certainly enjoys many other wines, but Riesling bears a special place in his heart...and in his veins.

I also asked him about some of his favorite Alsatian foods and three dishes came to mind. Choucroûte, the traditional dish of sauerkraut with meat and potatoes. Bäckeoffe, a casserole with meat & potatoes, often a winter meal. Escargot, a dish made by his beloved grandmother who was born in 1912. Over the course of the evening, Pascal told a couple stories about his grandmother and it was clear how important family was to him.

One of Pascal's favorite aspects of wine is that it "makes everyone on the same level." People of different social and economic classes all become equals while drinking wine. Consuming wine together, they share the same experience, which brings them together in a convivial atmosphere. It creates a positive bond, uniting people from diverse backgrounds. What a special aspect of wine! 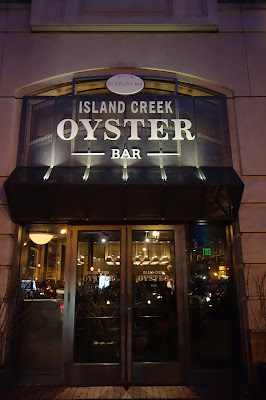 Dinner was of course excellent, which I expected from Island Creek Oyster Bar, one of the best seafood restaurants in the city. We started with a dozen raw Oysters, four different types, and then I moved onto a bowl of Clam Chowder. The chowder was creamy, without being overly thick, and full of rich clam flavors with plenty of potato pieces, a bit of smokiness and delicious biscuit croutons. For my entree, I chose the Seafood Casserole, a hearty and tasty dish containing lobster, scallop and haddock. For dessert, I thoroughly enjoyed the Honey Crisp Apple Fritters with a Bourbon Caramel sauce. The wines and the food paired very well together, and I was pleased to have the opportunity to taste the wines with food rather than simply on their own. 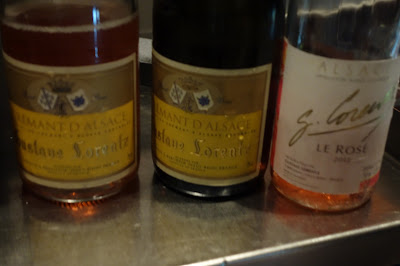 Gustave Lorentz produces gastronomic wines, intended to accompany food, and they best can be described as fresh, clean, well-balanced and mostly dry. The six wines I tasted all conformed to that description and I often marveled at their clean taste, which I was later informed is the signature of Lorentz wines. These are also wines intended to reflect the terroir of Alsace and their vineyards.

We began our evening with two sparkling wines, Crémant d'Alsace. The term "crémant" basically means "creamy" and originally referred to sparkling wines that were produced with less pressure, which tended to make them taste more creamy than effervescent. They can offer excellent value, being less expensive than Champagne.

The NV Cremant D'Alsace Brut ($24.99) might be labeled as non-vintage, but the winery does not blend vintages so all of the grapes in this wine are from the same vintage. The Cremant is a blend, in equal proportions of Chardonnay, Pinot Noir and Pinot Blanc. It spends 14-24 months on the lees, is disgorged three times a year, has an alcohol content of 12% and only 4000 cases are produced annually. It has a pleasant, fruity aroma of with a creamy, bubbly taste up front which finishes crisp and clean. There are appealing tastes of green apple, peach and melon. This is the type of sparkling wine that is going to appeal to many bubbly lovers.

The NV Cremant D'Alsace Rosé ($24.99), as per law, must be produced from 100% Pinot Noir. It spends about 15 months on the lees, has an alcohol content of 12% and only 1500 cases are produced annually. It will be available in Massachusetts in early May. Vintage matters greatly for their Pinot Noir, and they need low yields for the best fruit. 2005 and 2009 were very good years for their Pinot. I was enamored though with this Cremant, relishing the alluring red fruit aroma. On the palate, it was crisper, and not as creamy, as the Brut with a dry taste of various red fruits, from strawberry to cherry. A fine sipping bubbly, I would enjoy this on its own or with various foods. Simply delicious and highly recommended.

My love affair continued with the 2012 Rosé of Pinot Noir ($18.99). The winery once was not strong in Rosé but as the general demand for Rosé wines increased, they chose to raise their production levels. The wine has an alcohol content of 12.5% and only 2500 cases are produced annually. With a bright pink color, the Rosé has a more subtle nose, subtle hints of red fruit, and on the palate, it is dry, clean and crisp with bright red fruit flavors. Refreshing and tasty, I couldn't get enough of this wine. This was my favorite wine of the evening and again it is something I could enjoy on its own or with food. As there are very few Alsatian Rosés in the U.S. market, this is a more unique wine. Highly recommended. 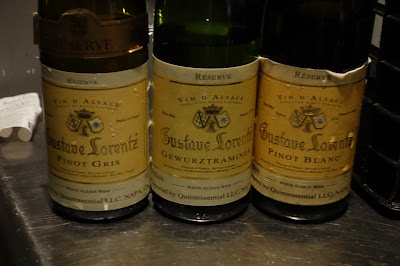 The 2010 Pinot Blanc Reserve ($18.99) is a blend of 90% Auxerrois and 10% Pinot Blanc, with an alcohol content of 12.5%. Pascal stated that Pinot Blanc is a "wonderful introduction" to Alsatian wines and is a "pure pleasure" wine. From its delightful melon aroma to its crisp, clean taste with pleasing flavors of melon, peach and citrus, this was an easy drinking, crowd pleaser. It has enough character to keep it from being too simple, and I would agree with Pascal that it is an excellent introduction to Alsatian wines, one sure to lure in wine lovers. And once you lure them in, they will likely stay for the rest of the Alsatian wines.

The 2008 Pinot Gris Reserve ($22.99) is made of 100% Pinot Gris. There is an Alsatian legend that in the 16th century, Baron Lazare de Schwendi traveled to Hungary where he found and enjoyed the sweet Tokay wines. He brought back a number of vines and they supposedly turned out to be Pinot Gris. Most likely though, the truth is that Pinot Gris vines were brought to Alsace from Burgundy. Unlike many cheap Pinot Grigio wines, this Pinot Gris possesses plenty of character and complexity. It has a richer mouthfeel, with prominent peach flavors, a streak of minerality and nice acidity. Delicious and worth seeking out.

The 2010 Gewurtztraminer Reserve ($24.99) is made of 100% Gewurtztraminer, with an alcohol content of 13.1%. The aroma is enticing, and you won't mistake it for anything else except Gewurtztraminer. On the palate, it possesses very bold and strong, spicy flavors and aromatics, including ginger, lychee, and floral notes. Though I liked this wine, and would have enjoyed trying it with some spicy Asian cuisine, it was my least favorite of the six. There was nothing wrong with this wine, but my personal preference would have been for the flavors to have been slightly less bold.

As I have written before, Alsatian wines don't seem to be on the radar of the average consumer. They need greater publicity to make consumers aware of their quality, value and excellent taste. Restaurants and wine stores need to work on hand selling these wines, recommending them to consumers who are open to expanding their palates. Wine writers need to highlight these wines, to speak of their virtues. The wines of Gustave Lorentz would be a fine introduction to consumers of the wonders of Alsatian wines.
Posted by Richard Auffrey at 3:00 AM