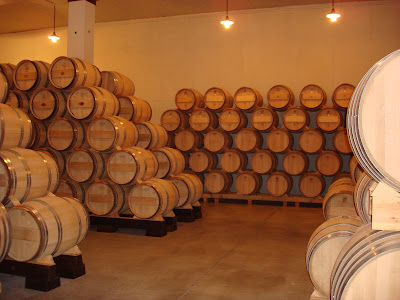 "To make a great Rioja, one must master the use of oak."
---Christopher Canale-Parola

For over eight years, I've been part of a group of friends who meet weekly and share wine. These are the same guys who I once worked together with on the Real World Winers blog, which I contributed to before the start of The Passionate Foodie blog. There was a love of Spanish wines from the beginning, and when we toast the evening every week, there is a hearty unison of "Rioja!"

One of the first Rioja wines that peaked my interest in Spanish wines was the Marqués de Riscal, and my first higher-end Spanish Rioja, the Bodegas Fernando Remirez de Ganuza Reserva, was stunning and made me seek out more higher-end Spanish wines. In 2007, on my second trip to Spain, I visited the Rioja region, stopping at several wineries and enjoying many excellent wines. It was a wonderful place, with such beauty and history, great people and tasty wines.

Last week, Rioja came to Brookline, bringing with it a great sense of history, a couple passionate people, and plenty of delicious wines, accompanied by compelling Spanish cuisine. 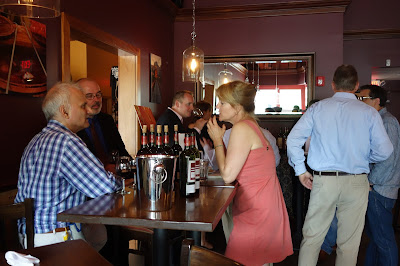 Chef Deborah Hansen, the owner of Taberna de Haro, a Spanish restaurant in Brookline, hosted a Rioja event with winemaker Matias Calleja of Bodegas Beronia and Christopher Canale-Parola, the Export Manager for Bodegas Gonzalez Byass and a former winemaker. I previously met Christopher at a recent Sherry tasting, and he was equally as knowledgeable and passionate this time.
The wines of Beronia are imported by The San Francisco Wine Exchange and distributed in Massachusetts by Bay State Wine & Spirits. You definitely should seek out the Beronia wines at your local wine shop. 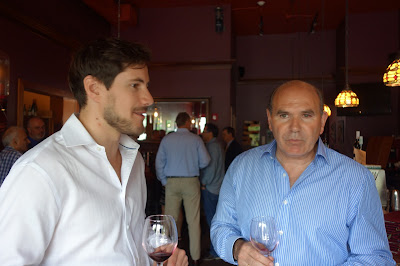 Back in the 3rd century BC, the region of Rioja was inhabited by a Celtic tribe known as the berones, and they referred to the region as Beronia. The winery chose this ancient term for their name. The winery itself, founded in La Rioja Alta, was established in 1973 by a gastronomic society which wished to produce their own wine. Thus, 2013 is their 40th anniversary and our tasting was partially a celebration of that achievement. At first, the winery only made Reserva and Gran Reserva wines, and found success in their efforts.

With their success, they desired to expand their business and found that Bodegas Gonzalez Byass also sought expansion. With a shared purpose, the twy came together in 1982 and it was then that Matias Calleja was hired. With parents who were growers, Matias has been involved in wine his entire life and has spent 31 years working at Beronia. Though he didn't speak much English, it was clear that this is more than a job to him, that it is a true passion and he couldn't see himself doing anything else. 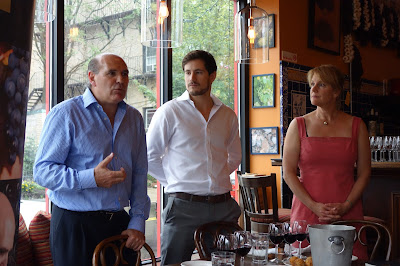 Bodegas Beronia owns about 20 hectares of vineyards and controls another 850 hecatres, with 200 growers tending the grapes. Approximately 90% of their grapes are Tempranillo and they produce about 430,000 cases annually. They own around 29,500 American, French and mixed oak barrels, having conducted numerous experiments with oak use. They seek mastery of oak for their Rioja and are not afraid to experiment, to test various combinations. Their mixed oak barrels are made from American staves and French oak heads.

Matias has a simple wine making philosophy: "Always think of the consumer." He believes you must evolve with the consumer, though you shouldn't lose the typicity of Rioja. Currently, consumers want natural and healthy wines, and that is important to Beronia. They practice sustainable viticulture, desirous of being as healthy as possible, and are always working toward better sustainability. They also try to reduce wine making manipulation, preferring physical rather than chemical manipulations. Certainly very admirable traits. 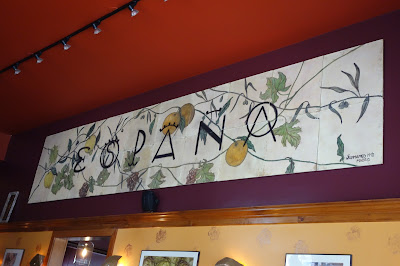 Chef Deborah Hansen, who expertly paired our lunch with the wines, stated that "Rioja is like a beautiful woman" and is "soft and sexy." A beautiful woman, whether in simple jeans, a paint stained smock or an elegant dress, still retains her beauty and Rioja is the same. You can put it with anything you want, any type of food, and it still retains that beauty. Deborah is also a fierce Rioja traditionalist and believes that the oak should always remain in the background, and shouldn't dominate the wine. 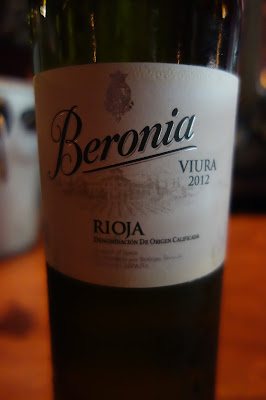 As we assembled at Taberna de Haro, standing around chatting with each other, we sipped some 2012 Beronia Viura, made from 100% Viura. Crisp, clean and fruity, this was a tasty way to begin the evening. I enjoyed the fresh citrus and peach notes of the wine. A nice choice for summer, and a wine that would pair well with salads, seafood, and light chicken dishes. 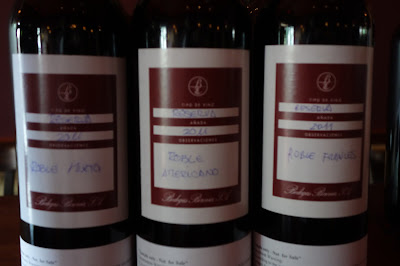 Prior to having lunch, there was a tasting of a number of Beronia wines, and these were intriguing comparison tastings, a way to show the influence of oak on Rioja. I began with a comparison of three bottles of 2011 Tempranillo Reserva, which have not yet completed their aging. One wine was matured in French oak, another in American oak and the third in Mixed oak. There were marked differences, especially in the dominance of fruit versus spice, with the mixed oak providing a more balanced taste. This tasting was an excellent way to see how the extracted flavors from different oak treatments influence the same wine.

I then moved onto two other wines, a 2008 Tempranillo Reserva and the 2011 Tempranillo Elaboracion Especial. The Reserva was matured in mixed oak, and provided a nice, balanced taste with tasty red and black fruit flavors, and a spicy backbone. The smooth tannins complemented the lengthy finish, and this was a Rioja you would say is soft and sexy.

On the other hand, the Elaboracion Especial is a more unique wine, and definitely not a traditional Rioja product. It undergoes malolactic fermentation in the barrel and then is aged for about seven months on the lees in the barrel. American oak is used and the barrel toasting is crucial to the taste. The barrels are toasted at lower temperatures over a long time, about 180 degrees Celsius for 26 minutes. This makes the toast penetrate deeper into the barrel, providing more mocha flavors to the wine. This wine was developed based on a lengthy survey of consumer tastes. It is a melding of red fruit and licorice flavors, with mocha, and offers an alluring aroma coupled with a smooth, well balanced and compelling taste. This wine certainly appealed to me and I can see why it is so consumer friendly. 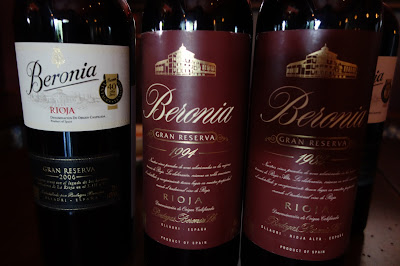 Finally, we ended the tasting with three aged Gran Reservas, from 1982, 1994 and 2006. The 1982 and 1994 wines were matured in American oak while the 2006 was matured in French oak. This was more of a comparison of aging rather than oak treatments, despite the difference in the 2006. Both the 1982 and 1994 were elegant wines, still with plenty of life within them, and presenting complex and compelling tastes. The 1994 was probably my favorite, presenting a bit more fruit flavors, as well as a touch more complexity. It is a wine, from an excellent vintage, that would impress any wine lover. The 2006 Gran Reserva was a much bolder wine, not as elegant, with more upfront spice and fruit. It would be interesting to taste that wine in ten years to see how it develops. 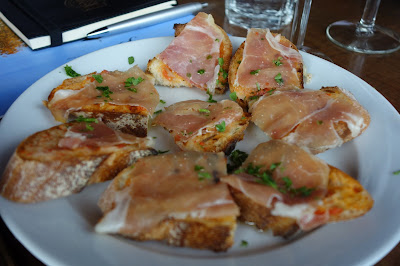 Our lunch began with Albondigas de bacalao, salt cod saffron balls, and Tostas de jamon, tomato toast w Spanish ham  The albondigas had a nice salty taste with a crunch to the outside, and creaminess inside. Quite addictive. And the toast and ham were also habit forming. The silky texture of the ham with the thicker texture of the bread, with some nice acidity from the tomato. 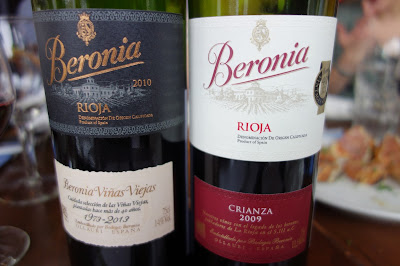 With this course, two wines were paired, including one of my favorites of the tasting. The 2010 Old Vines is 100% Tempranillo, from 40 year old vines, is matured for ten months in mixed oak. It was elegant and balanced, smooth and delicious, with a nice melange of fruit and spice. It was deceptively easy to drink, though possessed of intriguing complexity which would make you want to slowly savor a glass. It mesmerized me from the first taste and garners my highest recommendation.

The 2009 Crianza is a blend of Tempranillo, Graciano and Mazuelo which has spent 12 months in mixed oak. This is the wine they produce in the biggest volume, and is is extremely popular in Spain. It is young and fruity (cherry, raspberry and licorice), with mild spice notes. An easy quaffer and a perfect wine for burgers, pizza or tapas. 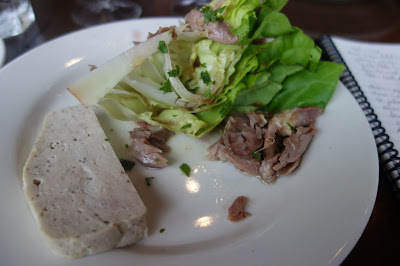 The next course was Cogollos con confit de pato, gem lettuce hearts with house made duck confit, and Pate de conejo, house made truffled rabbit pâté. Fresh lettuce, savory duck, and an earthy pate combined for a compelling dish that paired very well with the Rioja. This dish would have gone very well with the Sherry we tasted recently too. 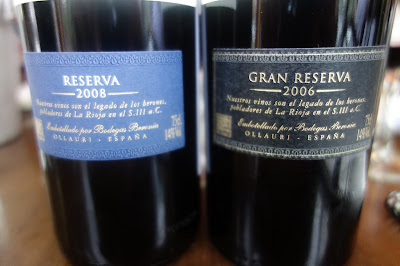 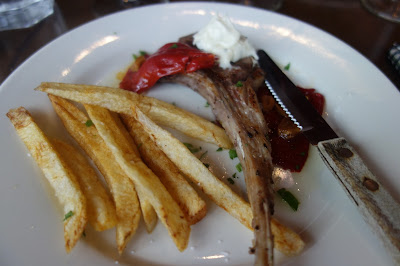 Next up was Chuleta de cordero (lamb chop with fresh oregano allioli), Piquillos asados (roasted piquillo peppers) and Patatas fritas (French fries). This is a classic pairing, and the savory and tender lamb impressed me. The addition of the peppers and fries added some interesting textures and tastes. The Rioja rocked with this dish and it is easy to understand why it is such a classic. 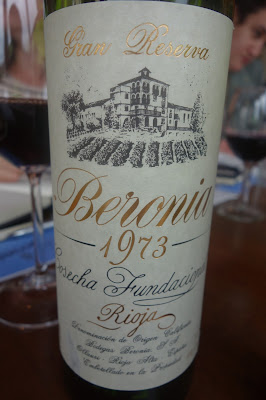 The final wine of the evening was special, a 1973 Gran Reserva, which was the first wine produced by Beronia. It is classic Rioja, produced in a more old fashioned method, and is a blend of Tempranillo, Garnacha, Mazuelo, and Viura. Viura is a white grape and was once permitted in the making of red Rioja, but that is no longer the case. This was a sublime, complex and intriguing wine, just a pure stunner. The aroma seduced my nose while the taste tantalized my palate. It had strong acidity, lots of red fruit flavors, mild spice and hints of leather and chocolate. It is hard to do justice to this wine, which offers much to a wine lover.

We neded our meal with two tasty cheeses, Payoyo (sheep and goat's milk cheese from Andalucia)
and Guriezo (cow's milk cheese from Asturias), accompanied by Nueces con aceite y miel (walnuts with salt, Spanish olive oil, and honey). Deborah stated that sweeter Rioja pairs well with creamy cheeses. Amazing cheeses, it is always a pleasure to get to taste a new Spanish cheese, one creamy and the other more firm. French cheese may get far more press but Spanish cheeses are worthy of attention, presenting plenty of diversity, great taste and artisan farmers.

Taste and enjoy the wines of Beronia and I bet you'll start toasting a hearty "Rioja!"
Posted by Richard Auffrey at 3:00 AM