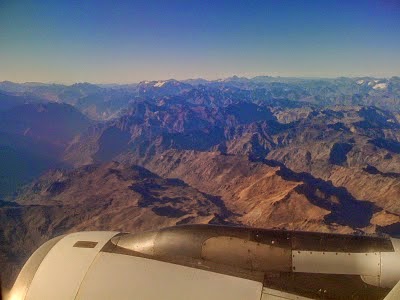 Many domestic flights no longer provide free food but you can purchase various food options, from cheese plates to sandwiches. You generally can still get nonalcoholic beverages for free, though must pay for any alcohol. I am talking primarily about Economy class, not First or Business class. International flights are usually more generous, and may provide both free food and alcohol. However, few people rave about airline food and drink. When is the last time you had excellent food and/or drink on a flight?

There have been numerous studies showing that food and drink actually don't taste the same when you are aboard a plane, many thousands of feet in the air. However, the science behind the reasons for this difference are not as well settled. It seems that at higher elevations, your taste buds do not operate as normal, and seem to be less effective. In addition, the air within the plane tends to dry out your nose, further decreasing your sense of taste. A recent article on CNN also noted that the sounds of an airplane can decrease your ability to taste by up to 30%.

CNN was reporting on an article, Airplane noise and the taste of umami, which was published in Flavour Journal. The article noted that research has demonstrated that "loud noise can suppress the perception of certain basic tastes." This seems to indicate one of the reasons why airplane food and drink doesn't taste like it should. However, there are exceptions and the article speculates about the reasons for such, alleging that tomato juice and the Bloody Mary may be the best choices for an in-flight beverage. So why did they come to this conclusion?

While four tastes, including sweet, sour, salty, and bitter, are seemingly affected by noise levels, it appears that the fifth taste, umami, may be immune. That may explain why tomato juice is so popular on airplanes, as tomatoes are full of glutamic acid and thus possess an umami taste. Because of its umami level, the flavor of the tomato juice is affected much less, if at all, by the loud noises of the plane. Cheese too can be rich in umami, so it is another popular choice on planes. Wine on the other hand has a low level of glutamic acid, and beer an even lower level, so they are more susceptible to the taste suppression caused by loud noises.

However, I think there is a better beverage choice than tomato juice.

Sake contains high levels of glutamic acid, giving it much more of an umami taste than wine or beer, and probably more than tomato juice too. Certain types of Sake, such as Kimoto and Yamahai, are even more umami rich than other types. As such, Sake would be essentially immune to the negative effects of loud airline noises, making it an excellent choice as an in-flight beverage. Unfortunately, most domestic flights don't carry Sake so it isn't a potential option but maybe they should seriously consider carrying it, especially as they all want to improve their food and drink selections. If they need more umami options, Sake would perfectly fit that position.

And maybe they would find that more people were willing to drink Sake than tomato juice.
Posted by Richard Auffrey at 3:00 AM