The Wines Of Uruguay (Part 1) 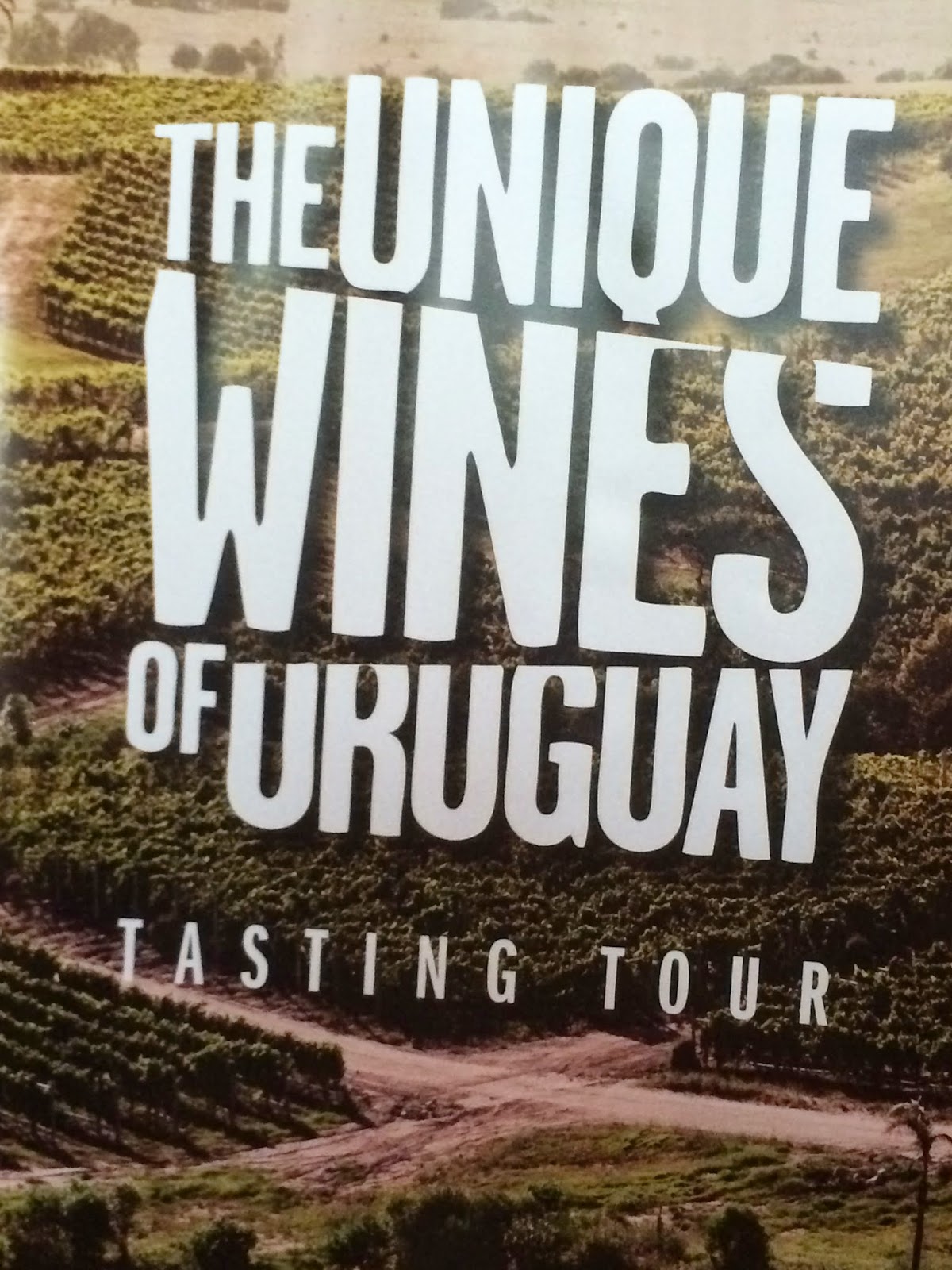 What country am I referring to in this description? You'll probably first think about Argentina, and all of it firs that country. However, it also fits a second South American country, Uruguay, and I think you'll be hearing more and more about this country in the near future. Located in the southeasterm region of South America, Uruguay (whose name means "land of the painted birds") possesses a pristine environment, with exceptionally pure water and about 410 miles of coastline, Approximately 82% of their land is dedicated to agriculture, the highest percentage of any country in the world. The more you learn about this intriguing country, the more you will be drawn to it, and want to travel there.

Until recently, I'd only tasted a handful of wines from Uruguay, and all were Tannat. Uruguay though has been on my radar this past year for a couple other matters, Estuario del Plata Caviar and Del Terruño Beef.  Because of the caviar and grass-fed beef, I've studied a bit about Uruguay, a small country surrounded by Argentina, Brazil and the Atlantic Ocean,  It has a population of about 3.4 million people, which is less than the population of Greater Boston.

There are also approximately 12 million cattle in the country, nearly 4 for each person. Uruguay is the #1 global consumer of beef, about 132 pounds of beef per capita, having recently dethroned Argentina which currently consumes about 129 pounds per capita. In comparison, U.S. beef consumption is only about 58 pounds, less than half what Uruguayans consume. Beef is Uruguay's primary export and with all the red meat they consume, it is no surprise that they love to drink red wine.

Recently, I attended the Wines of Uruguay 2nd Annual U.S. Trade Tour, where 16 wineries from Uruguay poured samples of their wines, a total of over 80 wines. There was also a seminar, presented by wine educator and speaker Gilles de Chambure, MS. on the differences of wines, especially Tannat, from the four major wine regions in Uruguay. This was a fascinating and educational event, enlightening me on the diversity of the wines of Uruguay. Uruguay is more than just Tannat, and even Tannat possesses its own diversity.

The more I learned about Uruguay, the more I saw its similarities to Argentina, though Uruguay's wine industry seems to be about ten years behind. We've seen the explosion in popularity of Malbec from Argentina during the last ten years, and maybe Tannat can have that same success. I've seen the potential of Tannat, though its future is still indeterminate. The wines of Uruguay are worthy of success and it might become one of the hot new wine regions. As we ponder its future, let us first take a look at its past.

As the conquistadors explored South America, it is thought that the Portuguese may have been the first Europeans to reach the region of Uruguay around 1512 though Spaniards traveled to the area around 1515. Both encountered fierce opposition from the Charrúa, an indigenous, semi-nomadic people and they also learned, to their dismay, that there was no gold or silver to be found in the region. Battles against the Charrúa continued as both Portugal and Spain decided they would still try to eventually colonize the area.

By 1603, though they didn't yet possess a permanent settlement, the Spanish introduced cattle, finding a verdant land which they thought would be conducive to such ranches. Finally, in 1624, they established their first permanent settlement at Soriano on the Río Negro. During this period, Jesuit missionaries also created a number of colonies in the valley of the Rio Paraguay. The Portuguese eventually decided to battle the Spaniards for the region, and thus, around 1670, they constricted a fort at Nova Colonia do Sacramento. The battles for control of this region would continue for more than 150 years,

Though it is likely that the Jesuit missionaries made their own wine in the 17th century, the first known mention of Uruguayan wines was not until 1776. This written reference noted that Spanish explorers brought vines from the Canary Islands to Uruguay. Not much seemed to happen with these vineyards for the next fifty years, as battles took prominence, with Portugal, Spain, Britain and Brazil all seeking to claim the area of Uruguay, The indigenous Charrúa became mostly casualties, and were largely wiped out in the massacre at Salsipuedes in 1831. Out of all these battles, Uruguay finally acquired its own independence in 1828.

With independence came an increased interest in vineyard plantings, though wine making didn't make its mark until the 1870s. Pascal Harriague (1819-1894) is said to be the Uruguayan "father of commercial winegrowing." Pascal immigrated from the French Basque region and eventually purchased an estate, La Caballada, in Salto, a town on the Rio Uruguay and it developed into a 200-hectare vineyard. In about 1870, he planted Tannat, a French grape from the Pyrenees, and its popularity soared. By 1877, it was being considered the national grape of Uruguay, and in honor of Pascal, Tannat became commonly referred to as Harriague.

Another important person in the history of wine in Uruguay is Francisco Vidiella, a former gardener from Catalonia. In 1874, he  established a vineyard and winery at Colón, planting Folle Noire and Gamay Blanc, both imported from France. Because of his contributions, Folle Noire became commonly referred to as Vidiella. It seems Uruguayans like to rename grapes after important countrymen..

Many other grapes were introduced to Uruguay during this time though it wouldn't be until 1903 that the first wine laws would be enacted.  Much of the wine produced at this time was for local consumption and it would not be until the 1980s that there was a major push to increase the quality of Uruguayan wine, as well as rules concerning labeling. In 1987, the National Institute for Vitiviniculture (INAVI), was established, and assisted in the creation of two levels of classification for wine: Vinos de Calidad Preferente (VCP) and Vino Común (VC).

VCP wines must meet a number of quality standards, such as being made from vinifera grapes and sold in 750ml bottles. The wines must be analyzed and approved by INAVI. If they fail to meet these standards, then the wines must be labeled as VC. If a grape variety is referenced on a label, the wine must contain at least 85% of that grape. In addition, if a geographical region is mentioned, all of the grapes must come from that region.

What is the current state of the Uruguayan wine industry?

There are approximately 200 wineries, with about half producing less than 100,000 bottles. Most of the wineries are small, family-owned operations and there are very few large companies. Uruguay has about 22,250 acres under vine, making it about half the size of Napa Valley. Total annual production is about 10 million cases and only 5% is exported, though their exports have tripled during the past five years. Their largest market is Brazil, which imports about three times as much Uruguayan wine as the U.S. As exports continue to grow, Uruguayan wines will start showing up in more and more American wine shops.

Richard,
Thanks for your excellent article on the wines of Uruguay and for attending our Trade event in Boston. It was a pleasure to share our wines. Looking forward to Part II!
Salud!
Leslie Fellows, Artesana Winery

we are so grateful to have people so passionate about wines like you who help us to spread the word about the fantastic wines we are producing in Uruguay!!!
thank you so much for joining us at the event!
Fabiana Bracco, Finca Narbona