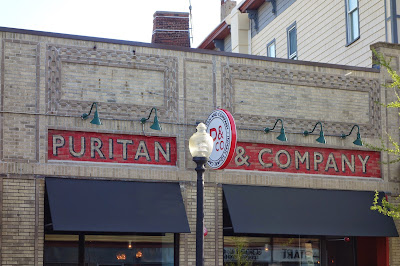 Puritan & Co., located in Inman Square, is one of those restaurants that shows a true passion for wine. Sommelier Peter Nelson has composed an interesting and diverse wine list and on the first Wednesday of each month, he hosts a special Wine Wednesday event. A five course dinner, created and prepared by Chef/Owner Will Gilson and Chef de Cuisine Alex Saenz, is paired with five different wines specially chosen by Nelson. Each Wine Wednesday has a specific theme, and the number of available seats varies, though it generally is an intimate event.

I was invited as a media guest to May's event, the Au Naturel Wine Wednesday, which showcased five natural wines. Twelve people attended this dinner, sitting at a communal table, including Jackson and Scott from Mise Wines, who supplied the wines and discussed them during the meal. Explaining why he chose the wines for the evening, Jackson stated he aimed for diversity in the wines, and also wanted wines that would represent Spring in France. Most of the wines were Biodynamic, and all were from small producers, each trying to produce more natural wines, with minimal manipulation.

Overall, I was pleased with all of the wines, finding a few of them especially impressive, and the food was also delicious and satisfying, and paired well with the various wines. The intimacy of the dinner, getting to discuss and share these wines with others, was an added benefit. It was casual and fun, a tasty gathering which I would highly recommend to all wine lovers. 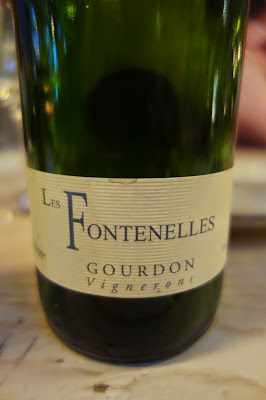 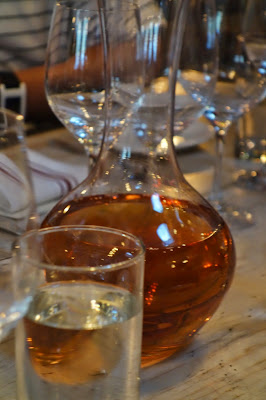 My favorite wine of the evening was the first one we tasted, the 2011 Château La Tour Grise Chenin Blanc “Les Fontenelles,” (about $25). From the Loire Valley, this wine is made of 100% Chenin Blanc and has an alcohol content of 13.5%. The winery has two different parcels of Chenin, each which is treated the same, but as they have different terroirs, the wines are very different. This wine had an intense orange-brownish color, which will change to a more clear, yellow color if left decanted over night. The wine had a mild, funky aroma, a common element to most of these wines, though the aroma generally went away with some time in the glass.

My palate was intrigued by the complex and intriguing flavors of this wine, from its strong minerality to its honey and apricot notes. Plenty of acidity, floral notes, a savory aspect, and more led to an impressive wine. The wine's umami aspect meant it would pair well with a variety of foods, and I wished I had saved some for the later course with the earthy snails. A killer wine which I highly recommend, and which I need to add to my cellar. 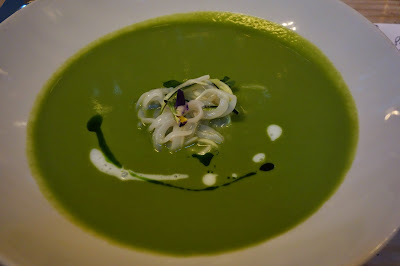 Our first food course was a Chilled Sorrel & Buttermilk Soup with squid and zucchini noodles. The creamy soup had a nice mix of bright lemon and herbal flavors, with an interesting textures from the noodles. It made for a fine Spring or Summer dish, and went well with the Chenin. 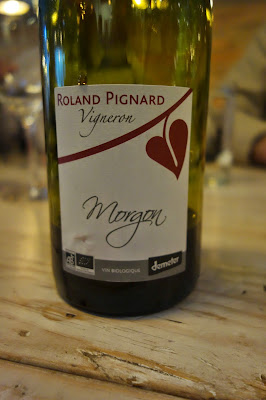 The second wine was the 2012 Roland Pignard Morgon (about $25), a fine Beaujolais. The winery owners are elderly, but still do everything themselves, by hand. It is also said by some that Morgon is the heart of the natural wine movement. With an alcohol content of 12.5%, this light red wine had plenty of delicious strawberry flavors with a mild earthiness. As easy drinking wine with character which elevates it over many simple wines. I usually prefer Beaujolais from Morgon so this wine appealed to me. 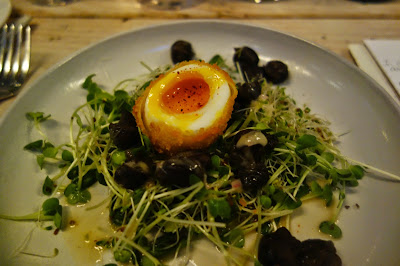 Next up was a Sprout Salad with a mixed blend of sprouts, a fried poached egg and Burgundy snails. That egg was the star of the dish, with a delightful crunchy coating and that lush, gooey yolk. The earthy snails were a tasty treat as well, especially when slathered in some egg yolk. The Beaujolais went well with this dish, and I can see this wine pairing with many Summer dishes. 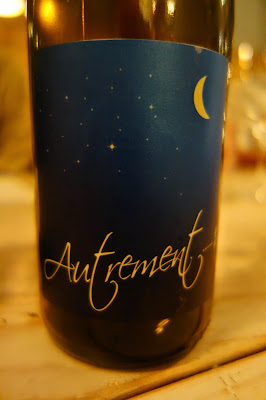 The 2012 Jacques Maillet “Autremont Rouge” (about $27), has an alcohol content of 13%, and is from the Savoie region. The word "autremont" means "differently" and this wine is a blend of 45% Pinot Noir, 35% Gamay, and 20% Mondeuse. The producer, Maillet, once worked with a co-op which used chemicals in its vineyards. Maillet became ill and it took him three years to recover, leaving him with a determination to never again work with chemicals, which led to him making his small estate Biodynamic. This wine had an intriguing aroma, with strong floral notes but another elusive scent, something I couldn't readily identify but which seemed familiar. The wine was light bodied, with plenty of red fruit flavors, mild earthy notes, smooth tannins and floral elements. Avery pleasing wine with lots of complexity. 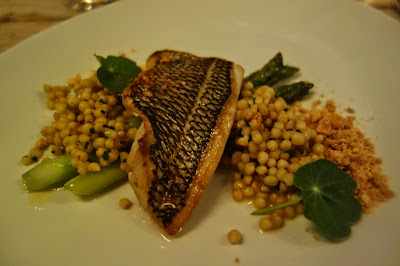 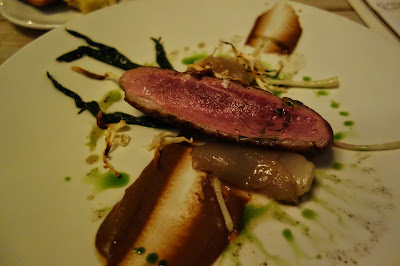 We moved onto the 2012 Domaine Ledogar Cinsault “Les Brunelles,” a wine (in magnum) from the Languedoc-Roussillon which is made from 100% 80-year old Cinsault, This wine had the strongest barnyard aroma though it settled down with time. On the palate it had a strong, earthy backbone with smooth tannins, tasty black cherry and raspberry flavors and a lingering finish. A compelling wine, this was also a great choice for the accompanying dish.

The Crispy Skin Duck & Alliums, with ramps, vidalia, and scallion oil, was my favorite of the five courses. The large piece of duck was quite thick, cooked mostly rare, and was absolutely sublime. It was extremely tender, with crispy skin, and each piece just melted in my mouth. I'd order that duck again and again. The onion paste streaks were also tasty, with both sweet and savory notes. 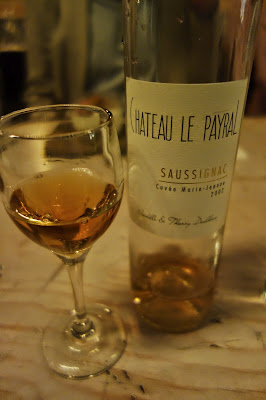 The final wine of the evening was the 2002 Château Le Payral “Cuvée Marie-Jeanne,” ($40) which has an alcohol content of 11.5% and is from the Saussignac region. Made from 100% Semillon that has undergone Botrytis, it is only made in exceptional years and will remind you of Sauternes. It is rick and thick, with good acidity, a balanced sweetness, and lovely flavors of honey, apricot, dried fruits and floral notes. A true treat. 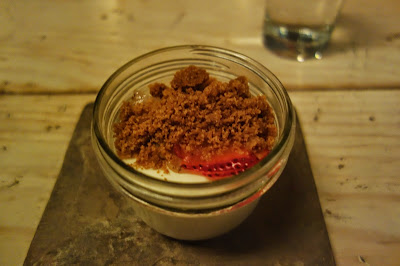 Dessert was a Frommage Blanc Panna Cotta which was made with sweet, red strawberries and some pickled green strawberries. The taste of the creamy panna cotta was enhanced by the sweet and sour strawberry flavors, with the pickled ones adding a very different, and tasty, aspect to the dessert. 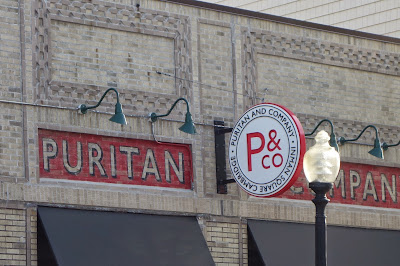 Compelling wines and cuisine, this Au Naturel wine dinner was a big hit, and the others at the communal table all seemed satisfied and pleased with all that we ate and drank. Seek out the wines from this dinner, and also make reservations for a future Wine Wednesday event at Puritan & Co. The next Wine Wednesday will be held on June 3.
Posted by Richard Auffrey at 3:00 AM

As someone that enjoys wine without being an expert, it was interesting to read about a restaurant that arranges events where the wine is selected by the host. Those attending can therefore be assured that food and drink will perfectly match to make it a perfect dining experience. The host explaining his choices will also enable wine drinkers to learn a little more about the subject.