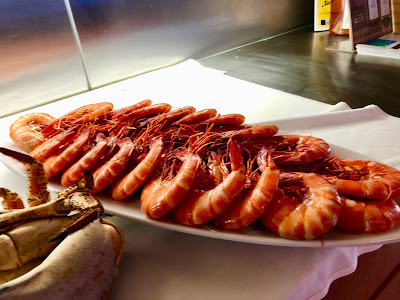 According to Matosinhos World's Best Fish, the coastal city of Matosinhos, bordering Porto, is "Europe's largest cluster of restaurants per square meter" with approximately 600 restaurants. And as expected, the majority of those restaurants serve fresh seafood, which the city claims to be the best in the entire world. On my recent journey to Portugal, I was fortunate to dine at one of the top seafood restaurants in the city.

Matosinhos was founded at the mouth of the river Leça and there are references to a settlement in this area at least as far back as the 11th century, though the Romans were known to have used the river for transport. It wasn't until the 19th century that it became an official town and it wasn't until 1984 that it was granted city status. It was also at the end of the 19th century that the Port of Leixões was established. Matosinhos remains an important fishing port though the city's economy has diversified, including becoming a stopping point for cruise ships. 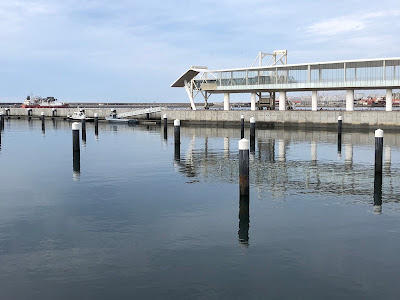 As part of our trip, we also visited the Leixões Cruise Terminal, which opened three years ago, and is both an architectural wonder as well as compelling for its dedication to marine sustainability. This terminal is able to handle the largest of cruise ships, bringing more tourism to the city, and that is but only one of its important purposes. 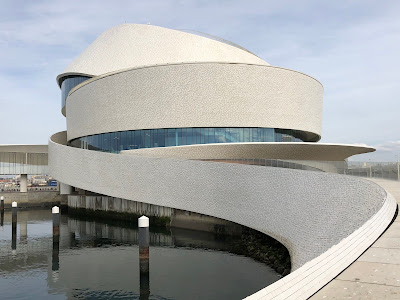 It is a stunning building, with an intriguing modern look, almost a ribbon of tiles wrapping around the  building. 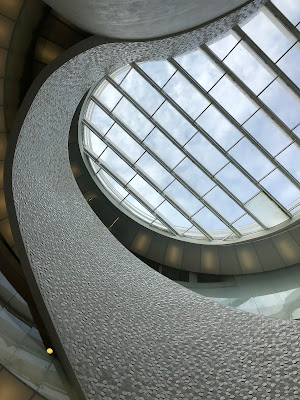 Looking up at the roof from inside the terminal. 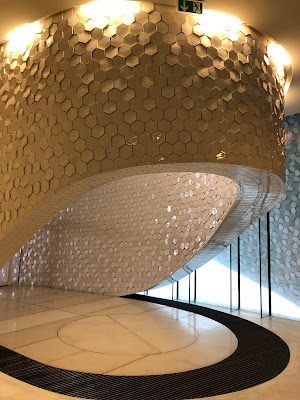 Inside the building, there is also an entry to one of the doors which resembles the mouth of a whale. I knew immediately what it symbolized and thought it was quite clever. 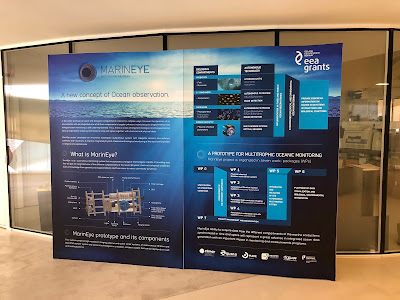 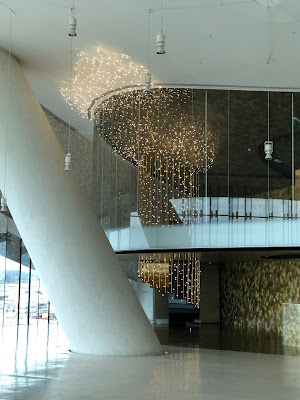 Another level of the cruise terminal is set aside for event functions, which can accommodate hundreds of people. 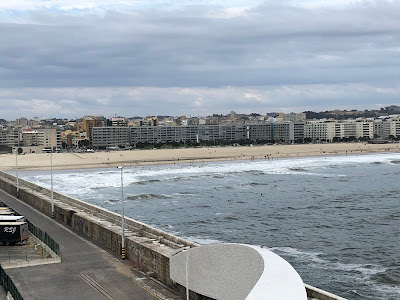 From the terminal, you can see the beaches of Matosinhos. 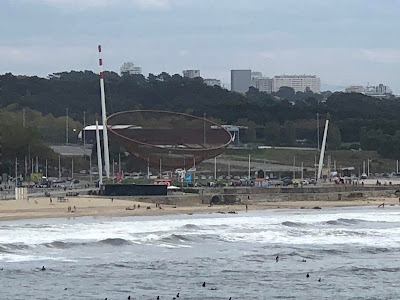 You can even see a famous sculpture, She Changes, a huge fishermen's net created by Janet Echelman, an American artist. It has been nicknamed Anemona, meaning the sea creature "anemone." 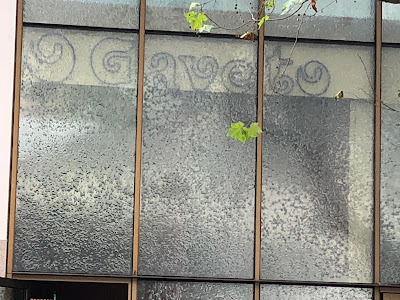 The biggest highlight of our visit to Martosinhos was our seafood lunch at O Gaveto, a famed restaurant which was established back in 1984. They serve traditional Portuguese cuisine, specializing in fresh fish and seafood, and are open for lunch and dinner seven days a week. All of their main ingredients are locally sourced, and they prefer to cook using few ingredients so they can highlight the taste of the seafood. The restaurant was even recommended in the latest issue of Wine Spectator (11/15/2018), one of only four restaurants in the Porto area earning a mention, 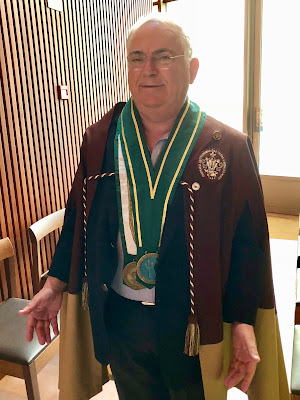 The restaurant is owned by Manuel Pinheiro (pictured above), who also owns the Porto Coliseum Hotel, and he dined with us at lunch. In addition, Manuel is the founder of the Confraria Gastronómica das Tripas à Moda do Porto, basically a Brotherhood of Tripe, as well as the Confraria Gastronómica do Mar, a Brotherhood of the Sea. Tripe is a popular dish in Portugal, and has been for hundreds of years. And with Manuel's passion for seafood, the Brotherhood of the Sea seems quite natural. 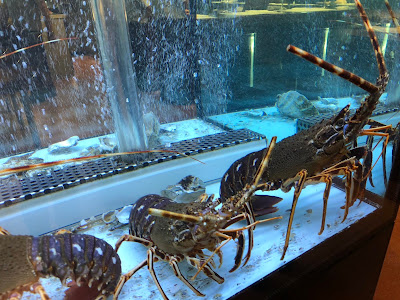 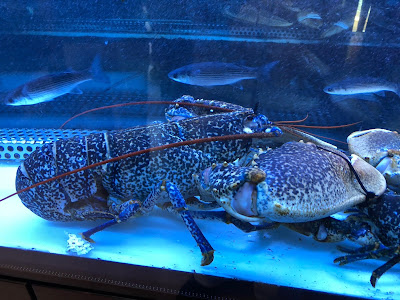 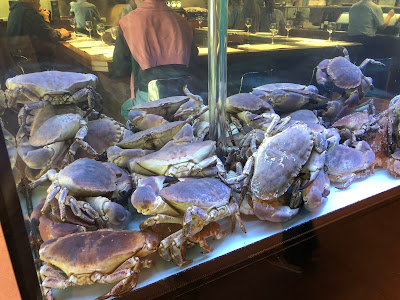 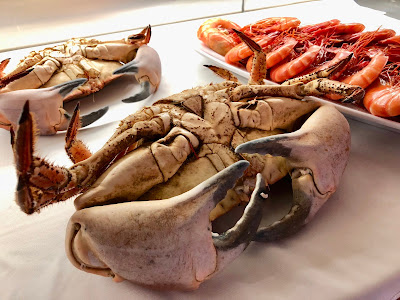 In the front section of the restaurant, near the bar area, there were various fish tanks and displays of seafood, from Atlantic Lobsters to Crabs. 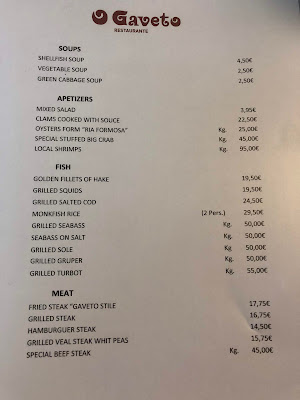 This is a page of their menu, including Soups, Appetizers, Fish and Meat dishes. Try items such as Shellfish Soup, Grilled Grouper, Monkfish Rice or even a Fried Steak "Gaveto style." 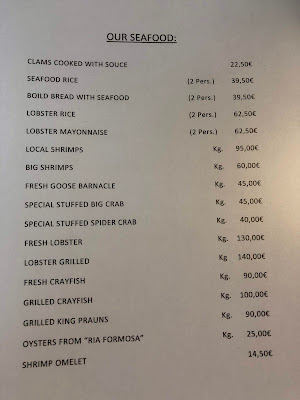 And this page of the menu includes a list of their Seafood options, from Goose Barnacle to Grilled King Prawns, from Stuffed Spider Crab to Shrimp Omelet. 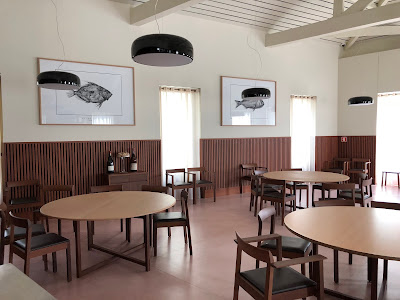 With dinner, we enjoyed some Vinho Verde wine, which was crisp, dry, fruity and refreshing, a fine pairing for all of the seafood which we would enjoy at lunch. 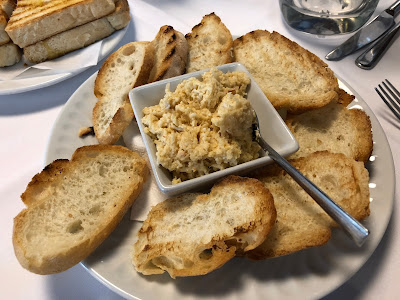 Our lunch began with a series of starters, including this Crab Pâté with toast. Filled with plenty of sweet crab, the pâté was creamy and flavorful. 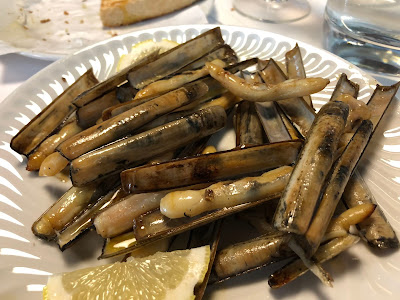 The Grilled Razor Clams were some of the plumpest such clams I've ever eaten, and they possessed a delicious texture and taste, with that hint of the sea. Simply prepared, the quality of the clams shone through this dish. 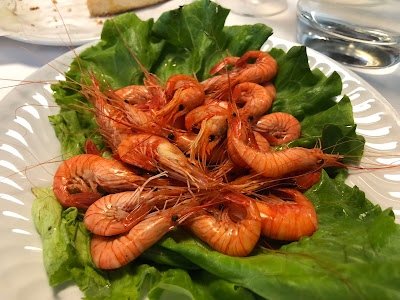 These Local Shrimp, though small, each contained a small piece of sweet and tasty meat. The soft shells were easy to remove and uncover the tender meat within. 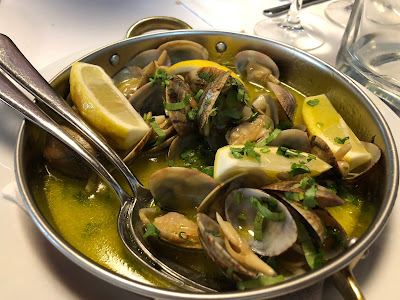 The Clams in this broth were also small and tender, and the flavorful broth was perfect for dipping a crusty bread. These dishes succeed or fail dependent on the taste of the broth and this dish was a winner. The broth was light and well seasoned, with possibly a touch of wine. 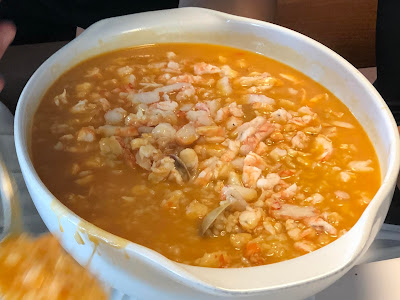 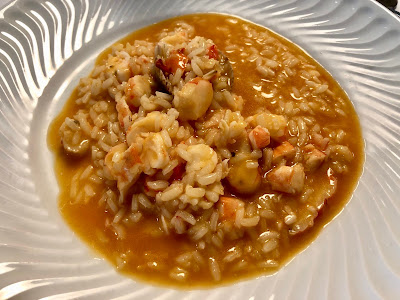 Our entree was the Seafood Rice and it was amazing! The sauce/broth was complex, with an excellent depth of flavor, a rich seafood taste, as well as some spicy heat. The rice was cooked perfectly, with just the right texture to it, and there was plenty of seafood, including shrimp, lobster, crab, and clams. A hearty comfort food, it earns my highest recommendation. I'll admit to eating three portions of this dish, though most everyone else at our table had at least two portions, if not more. This was one of the best dishes I enjoyed during my trip to Portugal. 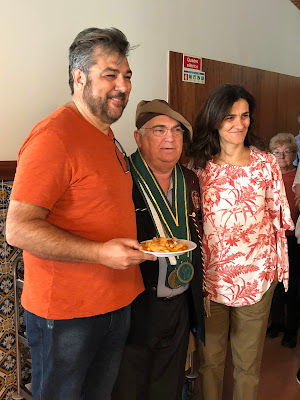 If you travel to or near Porto, then I strongly suggest you visit Matosinhos, to seek out some compelling seafood. And you won't go wrong by dining at O Gaveto. The Seafood Rice is a great choice though I suspect you can't go wrong with any of their seafood dishes. With over 1100 miles of coastline, Portugal certainly thrives on seafood and you should enjoy their fresh bounty if you travel there.
Posted by Richard Auffrey at 3:00 AM

This is what we call an informative post! I have made up my mind to try the seafood in O Gaveto restaurant. Luckily, I have received my visa for Portugal yesterday.