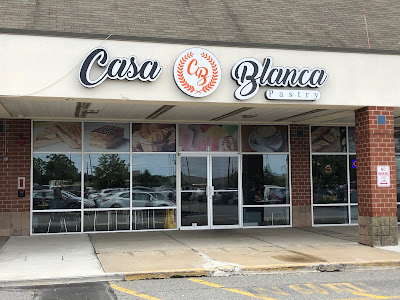 My first introduction to the Casa Blanca House of Pastries was when several of my good friends brought some of their pastries to celebrate my birthday. I was thoroughly impressed with those layered French pastries, a well balanced delight of flavors and textures. They came in several different flavors, and each was compelling in its own right. I knew then that I had to check out this bakery, to find out what else they had to offer.

The Casa Blanca House of Pastries originally started as a small shop on Shirley Avenue in Revere, and eventually opened a second location in Everett. This summer, they moved their Shirley Avenue location to a larger space, at 151 VFW Parkway in Revere. Owned and operated by a family of brothers, there are both Moroccan and French influences, and they offer both savory and sweet options, from breakfast to lunch, dinner to dessert. Moroccan cuisine isn't too common in the Boston area so you'll find some more unique items here. 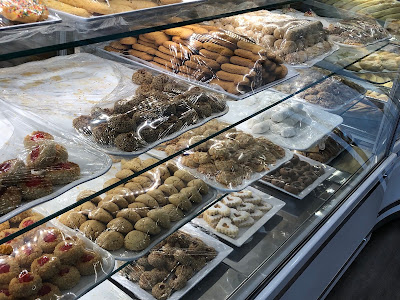 Their Breakfast Menu includes many of the usual dishes, from eggs to pancakes, waffles to breakfast sandwiches. There is also an option for a Moroccan Breakfast ($10.99), which includes coffee or tea, m'semen (a flatbread), baghrir (spongy pancake), harcha (semolina bread), baguette, oatmeal, hard egg, cream cheese, olive oil and honey. There are very few local bakeries where you can find those Moroccan breads and pancakes.

For Lunch or Dinner, they also sell a variety of sandwiches, from burgers to steak and cheese, from lamb kabab to falafel wrap. You'll also find salads, soups and dinner entrees, generally grilled meats or fish with rice and salad. I tried their Cheeseburger ($7.00) and Mixed Grill Dinner (chicken, lamb & ground beef-$12.99), and found them to be of average quality, nothing special. Those dishes wouldn't persuade me to return here to try other lunch or dinner options.

However, the strength of Casa Blanca lies in their baked goods, pastries and desserts. And they are well worth a visit for all of these items. Not only will they delight your palate, but they will also impress your guests at a party or celebration. 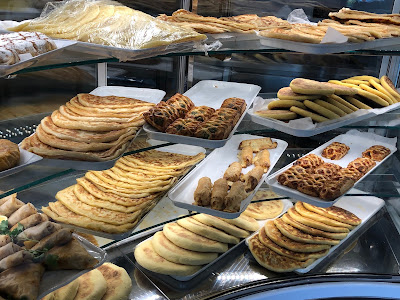 First, check out the case of their various breads, including items like m'semen, baghrir, and harcha. It would be nice if they labeled the items so you knew what they were, but the servers will freely answer your questions about all of the breads. Many will look somewhat familiar, with some items resembling Indian naan and others like a thick English muffin. They possess their own uniqueness though, and are quite delicious. 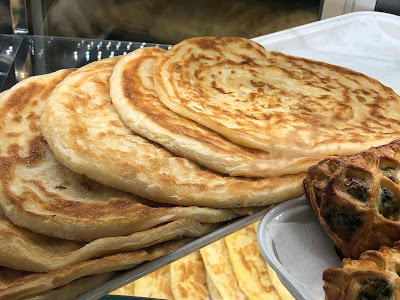 The M'semen, which is available in circular or rectangular form, is a traditional flatbread of North Africa, though sometimes it is referred to as a crepe or pancake. Its name derives from a Berber word meaning "well baked" or "well kneaded" and it is made so that it possesses about eight or so layers. I found it to be buttery and flavorful, flaky and soft, with plenty of internal layers. It is thicker and larger than a naan. It is an excellent bread for dipping into various sauces, and I've even used it to make a tasty meatball sandwich. On the menu it's listed as Moroccan Flat Bread ($1.75) and it is a very good value too. 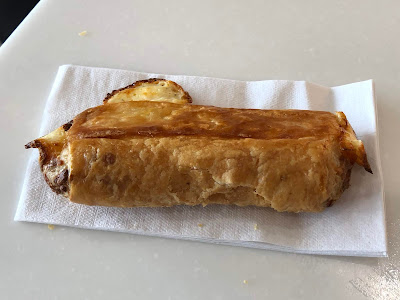 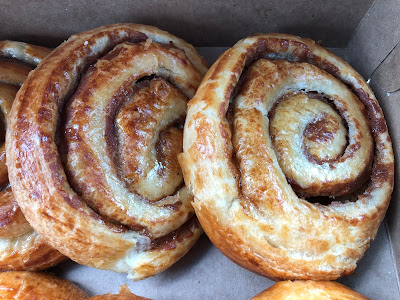 They sell a variety of the usual baked goods too, from doughnuts to muffins, danish to croissants. Their Cinnamon Rolls ($2) were amazing, with a soft and flaky roll, garnished with just the right amount of cinnamon and glaze. They were one of the best cinnamon rolls I've enjoyed in quite some time. It was the late afternoon when I purchased these cinnamon rolls, and I suspected they had been made early that morning, for their breakfast crowd. However, they seemed as fresh as if they had just been made. Highly recommended. 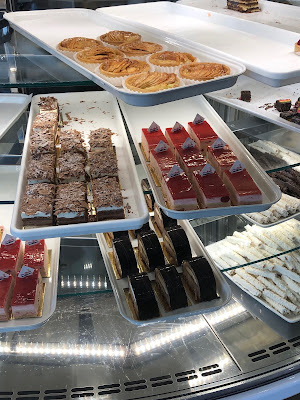 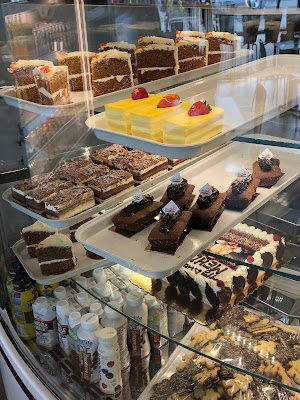 Other cases are filled with a variety of pastries, including Napoleon, Eclair, Tartlet, Cannolli, Carrot Cake, and others, generally priced $2.50-$2.99. They are visually appealing and you'll probably have difficulty choosing what you want. I don't think you'll go wrong though whatever your choice. 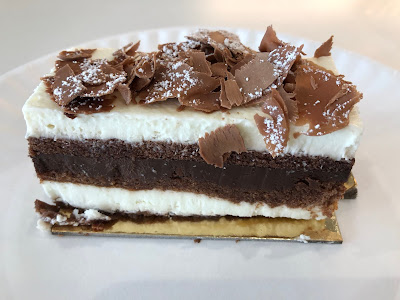 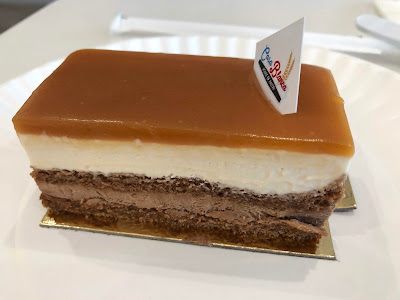 These French Pastries ($2.99), from Chocolate to Caramel, are layered beauties, with rich and creamy flavors. They aren't heavy, so you'll probably be able to finish one on your own. They are also available in plenty of other flavors, including Strawberry, Mango, Lemon, Moka Coffee, Black Forest and more.

I highly recommend you visit Casa Blanca House of Pastries for their breads, baked goods and pastries. They are well-made and delicious, reasonably priced and diverse. Their bakers and pastry chefs are obviously well skilled and it's also great to be able to find some of their Moroccan specialities which are difficult to find elsewhere. I know I'll be returning there again soon, to enjoy some of the items I've previously enjoyed, and to try some new ones too.
Posted by Richard Auffrey at 3:00 AM