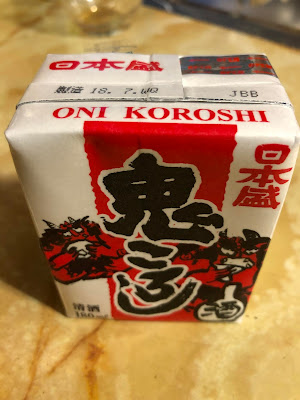 Japanese Sake in a Juice Box! And yes, there is a Straw too.

The Japanese aren't hung up over packaging for Sake, and Tetra Paks are simply one option for producers. Plus, Sake often comes in a single-serving size, 180ml, which is traditionally known as an ichigo or just go. A traditional Sake bottle holds 720ml, or four go, and is called a yongobin.

As far back as 2009, I've been extolling the virtues of wine in a Tetra Pak, though it was rare to see any with a straw. Tetra Paks are better for the environment in a number of ways, making it a more sustainable choice than a bottle. As I've stated before, "Tetra Pak cartons use 54% less energy, create 80% less greenhouse gasses, produce 60% less solid waste volume and also have 92% less package weight, compared to a 750ml glass wine bottle." In addition, they're portable and convenient, not requiring a corkscrew. You can take them to the beach, on a camping trip, on a boat, and much more without the worries of glass.

Some people are dismissive of Tetra Paks yet their advantages cannot be ignored, especially in a world where climate change is a major issue. Plus, the sheer convenience of them makes them compelling, especially during summer when many of is travel to the mountains or beaches. 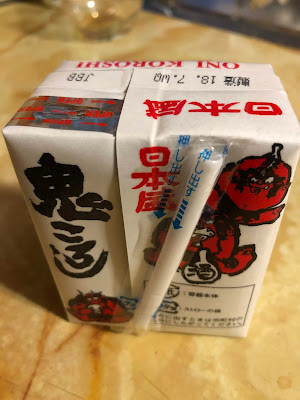 The Nihon Sakari Onikoroshi Futsushu ($7.99/180ml), with a 13-14% ABV, is produced by Nihon Sakari Co., Ltd., which was established 130 years ago in 1889 as the Nishinomiya Sake Brewing Company. In 2000, they changed their name to Nihon Sakari and they have also taken back on their old slogan, "More flavorful, more beautiful." Their main headquarters is located in Nishinomiya, in the Hyogo Prefecture, an area well-known historically for Sake production.

This Sake is Futsu-shu, non-premium Sake which constitutes about 75% of all Sake production in Japan. The quality of futsu-shu can vary widely, from cheap and harsh to smooth and flavorful. This Sake is also named Onikoroshi, which is roughly translated as "demon slayer," and during the Meiji era (1868-1911), Sake that was extremely dry was commonly known as Onikoroshi.

Drinking this Sake out of a straw was fun, and I found it to be dry, with a pleasing blend of earthiness and rice flavors. It was a simple Sake, but relatively smooth and easy on the palate with a hint of bitter on the finish. Definitely food friendly, it would also be enjoyable on its own. Don't overly think it. Just drink and enjoy.

Summer isn't over yet, so pick up some of these Tetra Paks for your travels. Kanpai!
Posted by Richard Auffrey at 9:07 AM