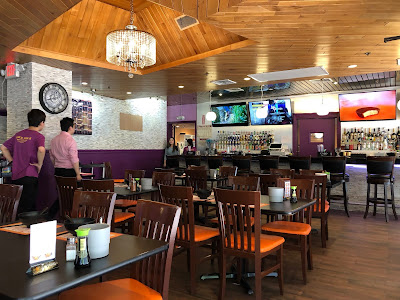 The area around Pleasant Street, Exchange Street and Florence Street/Commercial Street in Malden is undergoing significant construction. Right now, with all of the large construction vehicles and equipment on the roads, it isn't the easiest place to navigate or find street parking. As such, some people may avoid the area, but they would be passing up the opportunity to dine at an intriguing new Sichuan restaurant, Spicy World, at 157 Pleasant Street.

This is the second location of Spicy World, the first being in Boston's Chinatown, at 7 Beach Street. I've never been to the Chinatown location but have dined twice at the new Malden location, which just opened in June. It's a medium-sized restaurant, with a long bar area, and is open for both lunch and dinner. They have a full liquor license and offer a variety of cocktails, priced at $7.50, from a Mai Tai to a Grateful Dead. They also offer a variety of shots, at $4.00, from the Alien Nipple to a Black Unicorn.

They have an extensive menu of Chinese dishes, including plenty for the more adventurous, such as Chili Frog, Spicy Jellyfish, Spicy Pork Knuckle, Duck Head, Pig Ear, and Spicy Tofu Pudding. You also find more familiar cuisine, such as Homemade Dumplings, Fried Rice, and Crispy Chicken Wing. Prices are very reasonable, with almost everything costing $15.95 or less, especially considering portion size appears to generally be ample. 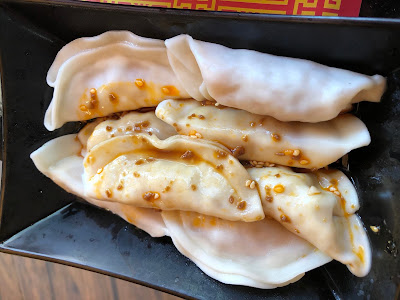 The Stem Dumplings ($7.95), with a spicy house sauce, were delicious, with a great texture to the dumpling skins, a flavorful pork & veggie filling, with a mildly spicy sauce. They were obviously fresh and home-made and not something pre-frozen. (I think the menu had a typo and they meant "steam" not "stem.") 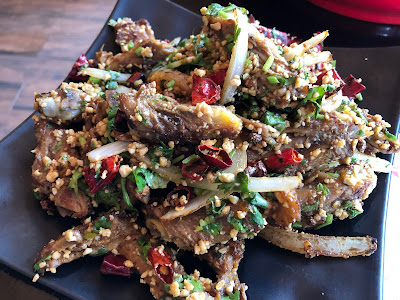 The Soy/Flavored Duck Wings ($9.95) formed a large mound on this plate, and were topped with crushed peanuts and onions. The wings themselves weren't intact, as I had expected, but were cut into much smaller pieces. They were meaty and tasty, with that richness you find in duck that you generally don't find in chicken. The texture and flavor of the peanut added an intriguing element to the duck. 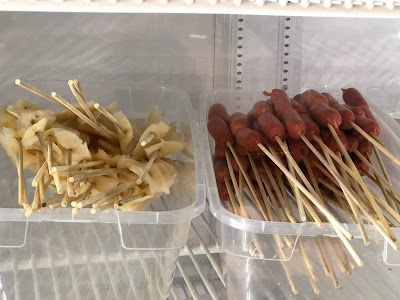 The specialty of Spicy World is Sichuan Skewer Pot, better known in China as Málàtàng, which roughly translates as "spicy numbing." Its name derives from its use of mala sauce, an oily and hot sauce which is created with Sichuan peppercorn, chili pepper and other spices. It is a common street food in China and its origins are murky.

At Spicy World, you begin with the "soup/broth" ($2.50) and then choose your level of spiciness, from 0 to 5. I first opted for the level 2 and it was just at my limits for spiciness, and it definitely is very much a numbing heat in your mouth. On my second visit, I went with level 1, and it was much better for my own preferences, though still with a pleasant numbing heat. Your own heat preferences will vary.

Next, you can choose, if you want, rice or noodles, from $1.50 to $3.00, which include items like White Rice, Udon Noodles, Ramen Noodles, and Green Bean Noodles. The rice comes in a bowl as a side, while the ramen noodles (which reminded me of the instant ramen noodles you find in supermarket packages) were in the soup. 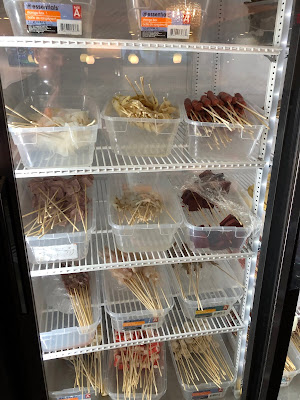 Then, you choose an assortment of skewers to top your soup, including vegetables, meat, and seafood. There are over 45 choices, and they are all priced at only $1.00! Your options include items such as potato, lotus root, winter melon, tofu skin, yam cake, chicken, lamb, quail egg, beef tripes, pig blood, squid, shrimp, fish ball, and more. Near the front of the restaurant, there are refrigerated cases containing all of the various skewers so once you order, your server can easily collect the skewers for your meal.

When they bring you a menu, they give you a pen so you can check off the items you want. That works for the skewer pot as well as all of their other dishes. 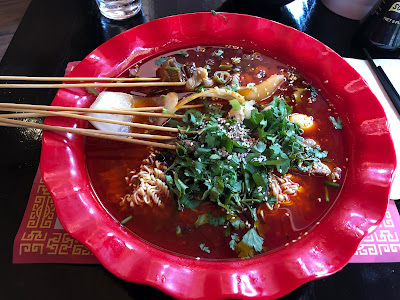 This is a skewer pot with ramen noodles. I'll note too that the bowl is quite large and makes for a filling meal. 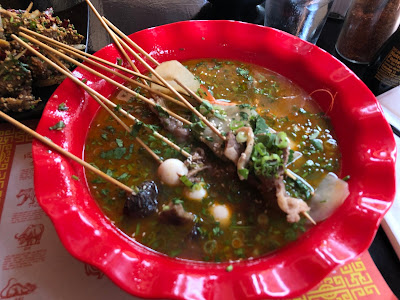 This is a skewer pot without any noodles in the soup.

The soup broth is flavorful, with a numbing heat, and a bit of scallions and greens in it. As the skewers sit in the broth, they pick up some of the spicy heat too. I enjoyed the skewers I ordered and the portion size varies dependent on the specific item. For instance, with the Quail Egg, you receive a skewer of three small eggs. The Mini Sausage has two links while the Potato has three, thinly sliced and fairly large pieces. The meats, from the Chicken to the Lamb, were generally tender. The Shrimp comes whole, with head and tail, and is a fairly decent size.

I'm certainly going to return here to try more of their menu but my initial visits have been very positive. Service was excellent, the food was tasty, prices were reasonable, and there is plenty of variety. I feel bad that Spicy World is brand new and all of the nearby construction work is likely adversely affecting their business. It is definitely worth checking out, taking the effort to find a parking spot so you can dine there.
Posted by Richard Auffrey at 3:00 AM

This is something reason to smile, it lift up my knowledge about this interesting ideas, it was an awesome day for me! I should share you this laundry this will made your day right while your busy doing important matters!