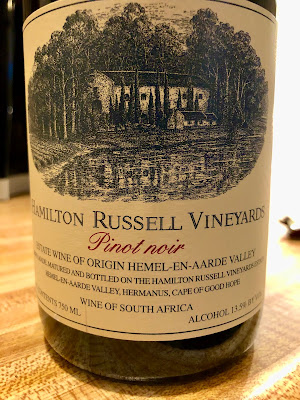 When wine lovers think about the grapes of South Africa, they usually first think of Chenin Blanc, Pinotage, and Shiraz. They might then consider Cabernet Sauvignon and Chardonnay, Merlot and Sauvignon Blanc. Pinot Noir generally is not one of the grapes that quickly comes to mind, but maybe it should as there are South African wine regions which produce high quality Pinot Noir, though they don't often receive the attention they deserve.

It's believed that Pinot Noir was first planted in South Africa in 1927, in the Stellenbosch region, but it wouldn't be until the 1970s and 1980s that the true potential of Pinot Noir began to become realized. Currently, only a little over 1% of the vineyards in South Africa are planted with Pinot Noir so it remains more of a niche grape, but that doesn't mean it should be ignored. And Hamilton Russell Vineyards produces one of the best Pinot Noir wines in South Africa.

Hamilton Russell Vineyards was founded in 1975 by Tim Hamilton Russell, who purchased 170, undeveloped hectares in the Walker Bay region. Tim sought out a cool climate, southerly site, desirous of planting Pinot Noir. Hamilton Russell is currently the most southerly winery in South Africa as well as the closest to the sea, only about 3 kilometers. The cool breezes that come in off the ocean make this the coolest region in South Africa.

This wine region is now known, since 2006, as Hemel-en-Aarde (which means "heaven and earth" in Afrikaans), and there are three wards within this area. This region, because of its closeness to the sea, has a maritime climate, and Pinot Noir and Chardonnay thrive here. Hamilton Russell is within the Hemel-en-Aarde Valley ward, and they were the first winery established within this region, with their first vintage in 1981.

Tim's son, Anthony Hamilton Russell, took over the reins of the winery in 1991, now working with his wife, Olive, winemaker Emul Ross and viticulturist Johan Montgomery. The winery only makes estate wines from Pinot Noir and Chardonnay, though they have a couple other labels for other grapes. I've been a fan of their Pinot Noir for over 12 years, though it hasn't always been easy to find it on the shelves of local wine shops.

I recently received a media sample of then 2018 Hamilton Russell Pinot Noir ($42) and I was impressed with it, as I've long been with their other vintages. The wine was aged for about ten months, in a variety of French oak barrels, including 35% 1st fill, 47% 2nd fill, and 18% 3rd fill, of various toast levels. With only a 13.5% ABV, this is a pleasant red wine to drink and you can easily have a second, or even third glass over the course of an evening. With a dark red hue, though still partially opaque, the wine has an alluring nose of red fruits and spice, a mild floral note and a hint of earth.

On the palate, it's smooth and silky, with an intriguing complex melange of flavors, including strawberry, cherry and plum, mild spice notes (including a peppery aspect), and a subtle, underlying earthiness. Nice acidity, a clean taste, and a lengthy, satisfying finish. Simply delicious. This Pinot Noir can compete with wines made in any other region of the world. I paired this wine with salmon, in a garlic-teriyaki sauce, and it was an excellent pairing. This wine is certainly ready to drink now, though I'd love to see it with some age too.

Hamilton Russell Pinot Noir remains one of my favorite Pinot Noir producers and you really need to taste their wines and understand how South African Pinot Noir can excel.
Posted by Richard Auffrey at 10:22 AM