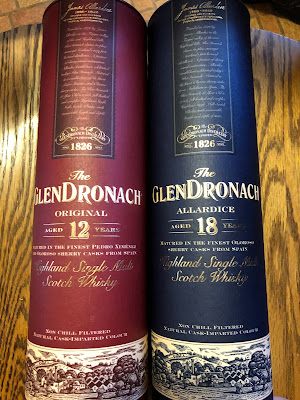 With the pandemic and social distancing, there aren't any wine dinners, tastings, seminars or similar such offline events. So, some companies are getting more creative, with virtual events, often using Zoom. Recently, the GlenDronach Distillery hosted a virtual Scotch dinner, inviting several writers to participate. Each writer was sent a dinner from The Haven, a Scottish tavern in Jamaica Plain, as well as two bottles of GlenDronach Scotch. Then, we dined and drank together on Zoom, as we learned more about GlenDronach from Rebecca Gardiner, their Boston Brand Ambassador.

Let's begin with a little history of the GlenDronach Distillery. The Aberdeen Journal (Scotland), April 27, 1853, reported the passing of James Allardes (also known as James Allardice), who was 82 years old. In the 1790s, Allardes started his career as a farmer in the Forgue region, part of the Aberdeenshire. The obituary also stated, "In the year 1825, the Glendronach distillery, whose mellow spirit has rendered the name familiar to all ears, was set on foot, mainly through the active cooperation of Mr. Allardes;..." Thus, GlenDronach is one of the oldest legal distilleries in Scotland. 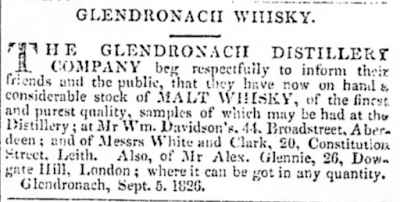 This announcement, from the Aberdeen Journal (Scotland), September 6, 1826, is one of the earliest notices from the distillery concerning their Whisky for sale.

The Caledonian Mercury (Scotland), February 27, 1830, reported there was a significant fire at the GlenDronach distillery, which began in the still-house. "The fire baffled every attempt to extinguish it, and in a short time completely destroyed the principal building, with the stills, utensils, and stock in it, leaving only the bare walls." The distillery was rebuilt, only slowed down a bit, and there was still plenty of stock for sale. 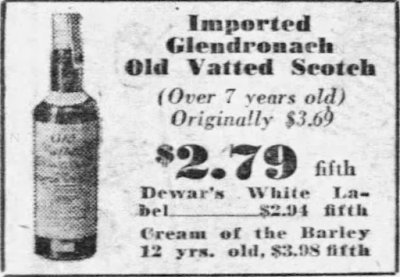 One of the first ads in the U.S. for GlenDronach was in the Daily News (NY), November 26, 1935. The ad noted that the Scotch was over 7 years old, and originally priced at $3.60 but on sale for $2.79. In the second half of the 1930s, other ads also popped up in both Massachusetts and Texas. This may have been the initial period when GlenDronach first started getting exported to the U.S.

The GlenDronach distillery is located in the Valley of Forgue, deep in the East Highland hills, and was named after the Dronac burn, a river that flows through the property. It's a very old-style distillery, and it's said they "run on GlenDronach time," a much more relaxing pace. For example, they own four huge pot stills with saxophone-like necks, and those necks take more time, slowing down the entire production process. And that is what GlenDronach prefers.

Over the course of the event, Rebecca Gardiner led us through the tasting, telling us the history and philosophy of GlenDronach. Her passion and knowledge were quite clear, and she also possessed a fine sense of humor. She made it fun, while also ensuring it was informative. At one point, she said that "Scotch is the Shakespeare of spirits." For some people, they get snobby about whisky and other people tend to avoid and fear it. Glendronach wants to make Scotch more approachable, to break down those artificial barriers and share it with everyone.

One of the ways they seek to make Scotch more accessible is through the use of maturation in Sherry barrels. Allardice himself used Oloroso Sherry barrels for aging, and the distillery eventually added, during the 1920s, the use of Pedro Ximénez (PX) barrels. Currently, they are the biggest user of PX barrels in the Scotch industry. Rather than just use Sherry barrels for finishing aging, they choose to use Sherry barrels for the entire length of maturation, which most other distilleries don't. These barrels are expensive, far more expensive than used bourbon barrels which are the norm, but GlenDronach is more concerned about the quality than the cost.

As I've previously discussed, I'm passionate that whisky producers should not place the term "Sherry" on their labels unless they are using authentic Sherry barrels, from the Jerez-Xérès-Sherry DO. "Sherry," like the term "Scotch Whisky," is a Protected Geographical Indication (PGI), worthy of respect and legal protection. Some whisky producers use barrels acquired from Sherry-style producers outside of the Jerez-Xérès-Sherry DO, and they wrongfully refer to them as "Sherry" barrels. That use violates the law and it shows a lack of transparency on behalf of the producer who is concealing the true nature of the barrels they used.

I asked about the sourcing of GlenDronach's Sherry barrels and I was pleased and impressed that all of their barrels are authentic Sherry barrels from the Jerez-Xérès-Sherry DO, and each barrel is traceable to its bodega in Jerez. This is very important to me, and GlenDronach is definitely a leader in this regard, respectful of the Sherry PGI and concerned about the true nature of the barrels they use for their maturation. Kudos to GlenDronach!

The Master Blender at GlenDronach is the famed Rachel Barrie, who has been in the whisky business for about 25 years, having begun her long career at Glenmorangie. In 2017, she became the Master Blender at the BenRiach Distillery Company, responsible for three distilleries, including BenRiach, Glenglassaugh and Glendronach.

Rather than call herself a Master Distiller, she prefers the term Master Blender, as she feels it is more reflective of her actual work. And as she has nosed and tasted over 150,000 whiskies, she brings an immense wealth of knowledge to her position. As I've long said, the art of blending doesn't always receive adequate appreciation, despite its importance to so many alcoholic beverages. It takes great skill and knowledge to be a proper blender, creating exactly what flavor profile is desired.

In many respects, GlenDronach flies under people's radar, especially as its production is relatively low, roughly 145,000 cases annually. The big names in the Scotch industry commonly produce millions of cases of whisky, so they get far more attention that a small distillery like GlenDronach. However, they recently received some serious attention, which may cause many Scotch lovers to start seeking out GlenDronach. At the San Francisco World Spirits Competition, held in March 2020, the GlenDronach Revival 15 Year Old Scotch won for "Best In Show Whiskey." Quite an honor.

Rebecca mentioned that "Scotch is very subjective," that different people will smell and taste different elements within the same Scotch. She also advised that you shouldn't add ice to your Scotch as it tends to dilute the whisky and freeze the Sherry aspect. Adding a little water is fine, but you might want to avoid ice. In addition, Rebecca stated that different foods bring out different flavors in Scotch, which can be fun to experiment with, to try out different pairings. And those pairings don't have to be fancy, like caviar and oysters, but can be simple, like a tasty fish & chips. I fully support these ideas, and have mentioned before that spirit-paired dinners can be fun and delicious. 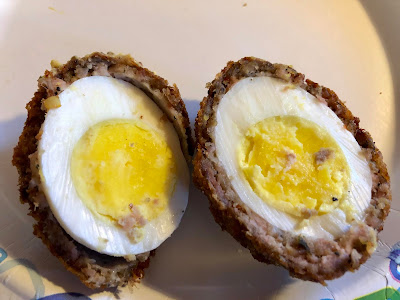 The food provided by The Haven was tasty, and appealed to me enough that I want to dine at the restaurant once our current situation changes. I'm a big fan of Scotch Eggs, and the allspice in the coating around the eggs helped to bring out the allspice flavors on the Scotch. 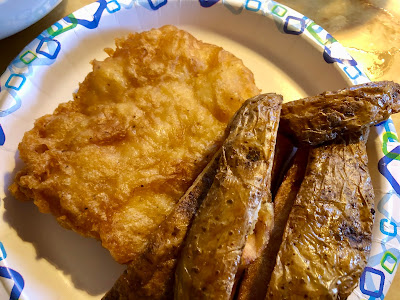 The Fish & Chips offered a nice, flaky piece of white fish, with a pleasing batter, and large potato slices. As Oloroso Sherry often pairs well with fried items, the Scotch, matured in Oloroso barrels, benefited from that pairing. Now I'd like to pair that Scotch with fried clams from the Clam Box in Ipswich. 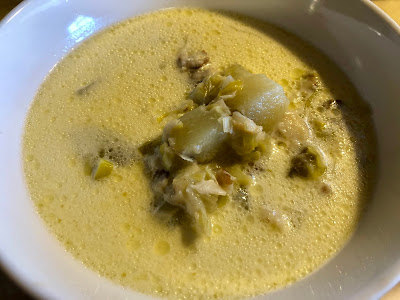 The Fish Chowder was tasty too, with plenty of fish and potatoes, and a savory and buttery broth, which also was intriguing with the Scotch. And it was true that each of these dishes brought something different out of the Scotch. 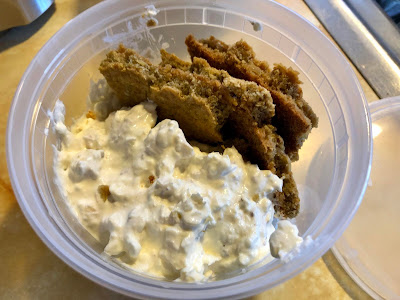 The creamy Haddie Spread, with Oatcakes, was flavorful as well, and the oatcakes also made for an excellent palate cleanser. 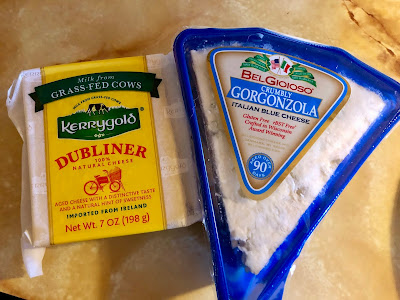 Scotch and cheese? Yes, this was a fine pairing too. With the Dubliner, we paired the 12 Year Old, and the sharpness of the cheese helped to bring out vanilla notes and creaminess in the Scotch. The butteriness of the cheese also drew out the Oloroso notes. With the Gorgonzola, we paired the 18 Year Old, and the mild sweetness of the Scotch contrasted well with the pungency of the cheese. Port and Blue Cheese has always been one of my favorite pairings, but I think I need to explore more Scotch and Blue cheese pairings. 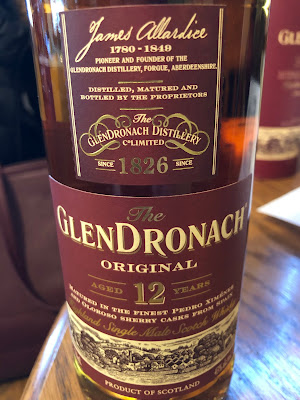 The GlenDronach 12 Year Old Single Malt Scotch ($62.99) was aged in a combination of Pedro Ximénez (PX) and Oloroso Sherry casks and has a 43% ABV. It's important to note that GlenDronach doesn't add any caramel coloring to their whiskies, and that their color is all natural, imparted only by the barrel maturation. With a light amber color, this whisky presented with an intriguing nose that would remind you of Sherry, with some sweet, raisiny notes of PX and the nuttiness of an Oloroso. On the palate, the Scotch was smooth, creamy, dry and full-bodied, with a complex melange of flavors, including vanilla, dried fruits, hints of citrus, spice notes, and plump raisins. The finish was lengthy and pleasing, with the Oloroso elements becoming even more prominent. Overall, a delicious and compelling whisky, which would make for an excellent introduction for those new to Scotch, but which would also please Scotch lovers. 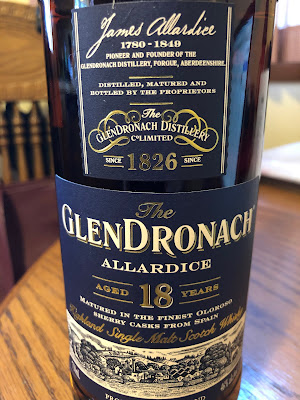 The GlenDronach Allardice 18 Year Old Single Malt Scotch ($179.99) was aged solely in Oloroso Sherry casks and had a 46% ABV. Rebecca stated this was her favorite, and that sipping it brought her home. She also recommended that you should let this Scotch breathe for about 20 minutes before drinking, to bring out its best aromas and flavors. It had a darker amber color than the 12 year old, and its nose was complex and alluring, with plenty of spice, chocolate notes, and nutty elements. The Oloroso aspect was noticeable and pleasing, especially to a Sherry lover like myself.

When I tasted this Scotch, I was immediately enamored with its complexity and fine taste. It was silky smooth, seductive on the palate, and each sip brought different notes to my mind. There were baking spices and salted nuts, chocolate notes and ripe fruit notes, honey and vanilla, sweet and bitter, and so much more. The finish was incredibly long, extremely satisfying, and beckoned you like a Siren to sip more. I loved this Scotch and its Oloroso notes, and continued sipping it long after the tasting event concluded. Highly recommended, and well worth the splurge. 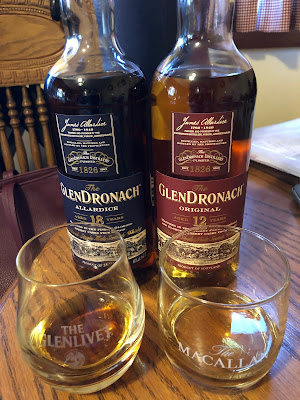 GlenDronach makes other whiskies as well, including the Parliament 21 Year Old, the Cask Strength Batch 8, and the Grandeur Batch 10 (a 27 Year Old Scotch). I have great respect for the whisky-making philosophy of GlenDronach, especially concerning their use of only authentic Sherry barrels. And their Scotches are delicious and complex, compelling spirits which are worthy of much more attention than they receive. Their 18 Year Old Scotch is a rock star, and has become one of my new favorite whiskies.
Posted by Richard Auffrey at 3:00 AM