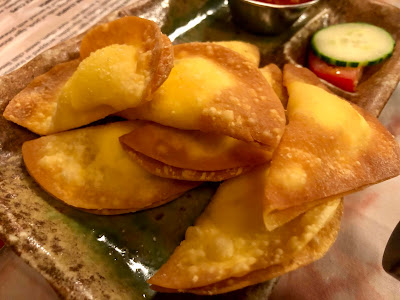 At most Chinese-American restaurants, you can find Crab Rangoons and they are a hugely popular item. Also known as Crab Puffs, Crab Pillows, and Cheese Wontons, these are essentially fried wontons stuffed with cream cheese and imitation crab (or sometimes real crab). They are crunchy and creamy, and they are prepared nearly the same at every restaurant. So, they seem like a safe choice, as you know what to expect, whenever you dine at a new Chinese restaurant.

As an aside, maybe Crab Rangoons are ready for some experimentation and alternatives. For example, at East of Suez, in Wolfeboro, New Hampshire, they make Goat Cheese Rangoon (pictured above), from "Local NH farm goat cheese, seasoned with fresh herbs, enveloped in wonton skin & deep-fried crispy outside, melty inside; with sweet chili sauce dip." These were fried perfectly, with a crunchy exterior, and the creamy goat cheese was a delight on the palate, enhanced by the sweet chili dip. They elevated the idea of Crab Rangoons.

When and where did Crab Rangoons originate?

Most sources indicate that Crab Rangoons were likely invented by Victor Bergeron, the founder of Trader Vic's, sometime in the 1950s. Fried wontons existed in the U.S. at least as far back as the 1930s. My own research tends to support that Bergeon was the inventor of Crab Rangoon, but that it was mostly likely created in the late 1940s, at least a few years earlier than many thought. And originally, it was called "Rangoon Crab," with someone inverting the position of the term sometime in the mid-1950s.

The first reference I found to "Rangoon Crab" was in the San Francisco Chronicle (CA), May 15, 1950. The newspaper printed The Chronicle's East Bay Dining Directory and there was a listing for Trader Vic’s, in Oakland, and one of the items that was "highly recommended" was their “Rangoon Crab.” If it already was an established menu item at this time, then it is probable that it existed prior to 1950, and was created sometime during the late 1940s. There was a similar Dining Directory in the newspaper in May 1949, but it didn't mention specific food items as in this article.

The first reference to Crab Rangoon outside of Trader Vic's was in 1958. The Los Angeles Times (CA), December 7, 1958, published an advertisement for 7 Lanterns, a Cantonese and Polynesian restaurant. The ad noted, “The cooking is most unusual, and includes such rarities as crab Rangoon—crab puffs from a Burmese recipe—” Though some have alleged Crab Rangoon might have its origins in Burma (now known as Myanmar), I have yet to see any evidence of such. The Progress-Bulletin (CA), February 4, 1959, also mentioned a new Chinese restaurant, Jade Place, which would have crab Rangoon on their menu. Obviously, crab rangoon were spreading beyond Trader Vic's to other California restaurants.

The Oregonian (OR), December 10, 1959, noted that a number of Polynesian dishes were demonstrated at a University Club luncheon, prepared by Oswaldo, a manager of Trader Vic’s, and one of those dishes was crab Rangoon.

Flying Crab Rangoon! The Dallas Morning News (TX), August 9, 1960, printed an ad for Delta Airlines, noting that on their flights to Atlanta they offered “Delta’s Polynesian Luau.” Crab Rangoon was one of the various dishes offered in their Luau special.

Crab Rangoon continued to spread across the country. The Orlando Evening Star (FL), April 6, 1961, discussed a new restaurant, Dobbs House Tiki, which had crab Rangoon on their menu. The Evening Star (D.C.), June 15, 1961, noted a new location of Trader Vic’s in their city, and that “Crab Rangoon, another of the house specialties, is a pate of crab meat in egg noodles and deep fat fried.” The Dallas Morning News (TX), April 1, 1962, had an ad for the Town & Country restaurant, offering a “Hong Kong Dinner” for two, priced at $4.25 per person, which included crab Rangoon.

The first recipe I found for crab Rangoon was printed in the Indianapolis News (IN), August 19, 1965. The ingredients included 8 ounces of canned crab meat, 6 ounces of processed cream cheese, egg roll skins, and 1 beaten egg. The instructions stated, "Mince equal portions of crabmeat and cream cheese; roll in small balls. Cut average egg roll skins in quarters. Place crabmeat and cream cheese balls in center of each quarter. Brush inside edges with beaten egg. Fold over in three-cornered fashion. Chill in refrigerator for at least 30 minutes. Deep fry at 350 degrees." This is a rather plain recipe, without any spices or herbs in the crab and cream cheese filling. And nowadays, wonton wrappers are fairly common so you wouldn't need to use egg roll skins.

A recipe from Trader Vic's was provided in the Minneapolis Star (MN), November 14, 1973. The ingredients, to make 30 crab Rangoon, included 1 pound of crab meat, 1 pound of cream cheese, dash of A-1 Sauce, dash of garlic powder, Won ton noodles squares, and 1 egg yolk beaten. The instructions stated, "Chop crab and blend with cheese and A-1 sauce; add garlic powder, salt and pepper; blend thoroughly. Put 1/2 tsp of mixture in center of noodle square; fold square over, corner-wise. Moisten edges slightly with beaten egg and twist together. Fry in deep fat until deliciously brown."

What are your thoughts on Crab Rangoon?
Posted by Richard Auffrey at 3:00 AM

Interesting column!!I I came across The Passionate Foodie looking for thr origin of crab Rangoon, part of my Christmas dinner this year! Very interesting and informative reading!