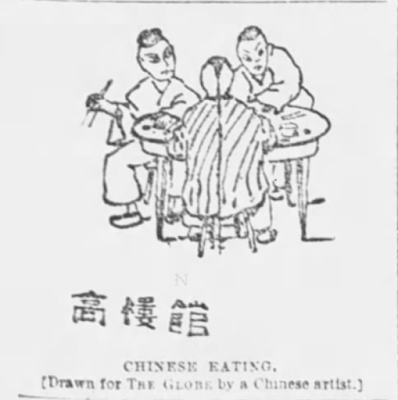 I've previously written a five-part series, The First Restaurants In Boston's Chinatown, and I'm now expanding my coverage to include the rest of Massachusetts. This is a work in progress, and I'll be adding additional cities and towns in the future parts of this new series. Part 1 dealt with Cambridge and Fitchburg; Part 2 with Pittsfield and Malden; Part 3 with Springfield, Part 4 with Fall River, Part 5 with Lowell, Part 6 with Quincy, and now Part 7 deals with North Adams and Brockton.


**********
As I detailed previously, in June 1870, 75 Chinese workers came to North Adams to work in a shoe factory. They brought two cooks with them and had their own kitchen at the shoe factory, where they lived. Over the next ten years, some of those workers left, but others arrived to replace them, until the later half of 1880, when there were essentially no Chinese workers remaining. Some of the Chinese returned to China, others went to San Francisco, and some likely settled in Massachusetts. However, the first Chinese restaurant in North Adams didn't arrive until 1917, much later than you might have expected.

The North Adams Transcript, December 1, 1917, reported that a Chinese restaurant was coming to town, which had been promised to come for the past several months. The restaurant was to be located on the second floor of the Bradford block on Main Street, over the store of J.E. Miller. It was noted that some citizens had opposed the idea of this restaurant but that it would still open within a short time. The name of the restaurant wasn't given, and there didn't appear to be any further references to this restaurant.

It seems that plans for a second Chinese restaurant didn't appear until 1923, though those plans went nowhere. The North Adams Transcript, August 15, 1923, mentioned that couple Chinese, who ran a chain of restaurants, were looking for a spots in the city for a new restaurant. However, it was quickly noted that those plans fell through.

A month later though, the North Adams Transcript, September 8, 1923, reported that two other Chinese, Wang Foo of Boston and W.J. Toy of Burlington, Vermont, had purchased The Crystal Lunch, on Main Street, and would turn it into a Chinese-American restaurant. The two men owned other restaurants in Boston, Burlington, Vermont, and Bangor, Maine. 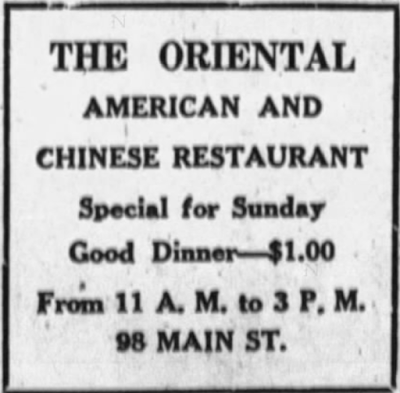 The new Chinese restaurant was opened in early 1924. The North Adams Transcript, February 28, 1924, published an ad for The Oriental, at 98 Main Street, offering a special Sunday dinner for $1.00.

Five years later, the North Adams Transcript, December 2, 1929, reported that there had been a large fire at The Oriental Restaurant, also noting that the owner was now Fred Young. The fire swept through the interior, causing several thousand dollars of damage. The fire’s origin was unknown but it was thought to have started near the cashier’s desk in the front of the restaurant. The kitchen was not damaged, but in the dining room, the tile walls, steel ceiling and tile floor were extensively damaged, and all of furnishings, including an electric player piano, booths, tables, etc. were destroyed. Despite that damage, the restaurant was apparently opened by January 2, 1930.

About five years after the party, the North Adams Transcript, November 20, 1934, reported that The Oriental Restaurant had been seized under a mortgage foreclosure. Fred Young and his staff had left the city. Though the restaurant closed, there were ongoing negotiations to reopen it. It would reopen, but no longer as a Chinese restaurant. The North Adams Transcript, January 7, 1935, mentioned that E.K. Daily, of Bennington, Vermont, would open a restaurant and ice cream parlor.

The Boston Herald, April 7, 1909, briefly mentioned that there was a Chinese restaurant on Ward Street but no details were provided, and I never found any other references to this restaurant. It may have existed for only a very short time.

The primary Chinese restaurant during this time period was first mentioned in the Boston Herald, November 26, 1911. The restaurant opened on Main Street about two month ago and faced some significant, and active, opposition. Initially, about three weeks before, certain city officials refused to attend a dinner at the restaurant. Afterwards, the Central Labor Union branded the restaurant as “unfair to labor,” and refused to allow the the Chinese waiters to join their organization. The labor organizations wanted the restaurant to shut down, and they passed out circulars which encouraged people not to patronize the restaurant. The restaurant owners, vowing to fight to the end, made an appeal to Mayor Howard but the owners claimed that the Mayor didn't help them.

Soon after, there was an upcoming mayoral election. The Boston Herald, December 3, 1911, noted that on December 5, the public would vote for Mayor Harry Howard or the ex-mayor William Clifford, and the election was expected to be close. However, the article noted that Mayor Howard had decided to approve the license for the Chinese restaurant on Main Street, earning him some anger from the labor unions. Ex-Mayor Clifford stated he would not have approved the license. In the end, Mayor Howard was re-elected and the restaurant continued to operate.

The Boston Globe, April 12, 1913, reported on a City Hall hearing about the renewal of the license for the Chinese restaurant. Over 400 people attended the hearing at City Hall, most opposing the license, and all who were representations of labor organizations. Apparently, the license was granted and the restaurant continued to operate. Curiously, none of these articles had yet provided the name of the restaurant.

Six years later, the Boston Herald, October 28, 1919, discussed the attempt of another Chinese restaurant to open in Brockton. This time, the Aldermen, with the backing of labor organizations, rejected the license application of Shangtun, a restaurant project backed by a $50K corporation. It was noted that only one Chinese restaurant had been successful in gaining permission to open in the city, although it still garnered opposition at times. 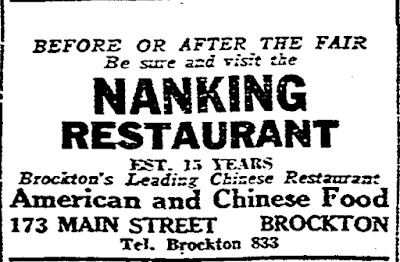 The restaurant's name is finally revealed! The Boston Herald, October 3, 1926, published an advertisement for the Nanking Restaurant, located at 173 Main Street, and stated to be "Brockton’s leading Chinese restaurant (thought it was also the only such Chinese restaurant). It was also noted that the restaurant had been around for 15 years, since 1911. Unfortunately, I couldn't find anymore about the Nanking, so don't know how much longer it lasted.

In the 1980s I remember seeing an old sign on a corner of the 2nd floor of one of the buildings on Main St. in downtown Brockton that said, if I recall correctly, "Nanking Trading Co." I was always curious about that and wonder if it was associated with the restaurant in your article. I was driving through downtown Brockton today, something I have not done in years, and noticed that the building was no longer there, however my long dormant curiosity led me to your page.