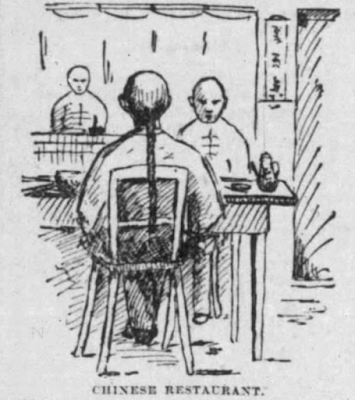 I've previously written a five-part series, The First Restaurants In Boston's Chinatown, and I'm now expanding my coverage to include the rest of Massachusetts. This is a work in progress, and I'll be adding additional cities and towns in the future parts of this new series. Part 1 dealt with Cambridge and Fitchburg; Part 2 with Pittsfield and Malden; Part 3 with Springfield, Part 4 with Fall River, Part 5 with Lowell, and now Part 6 will deal with Quincy.

Quincy also has an abundance of excellent Asian restaurants and eateries, from Japanese to Thai, Korean to Chinese. For example, you'll find The China, maybe the only Chinese restaurant & Sports Bar in Massachusetts, MoMo Cafe, where you can find tasty Durian Doughnuts, and Chili Square, where you can order Duck Heads and Duck Wings.

However, in the early 20th century, there were few Chinese in Quincy, and around 1960, the census found only around 100 Asians in Quincy. Surprisingly, the first two Chinese restaurants which opened in Quincy were owned by white Americans. This may be the only Massachusetts city where that occurred, as I've found that in other cities and towns, even with small Chinese populations, the first Chinese restaurants were still owned by the Chinese. Why was Quincy such an anomaly?

The first Chinese restaurant in Quincy, which I've been able to document, was the Green Dragon Inn, also referred to as the Green Dragon Cafe, which opened in the Spring of 1916. The Patriot Ledger, April 1, 1916, noted that Mrs. Ida Morgan had obtained a common victualers license from the city council to operate a restaurant at 1609 Hancock Street, which would serve Chinese and Japanese cuisine. The restaurant, located on the second floor of the building, would open in a few days. However, it wasn't without controversy.

There was a “Vigorous protest against the use of a representation of an American flag in connection with a chop suey sign over the entrance to the restaurant.." The flag, which was to be electrically illuminated, was also to be located at the foot of the stairs up to the restaurant. It was alleged that the use of the flag violated Chapter 571 of the Acts of 1914 “which expressly provides that the flag of the United States or a representation of it shall not be connected directly or indirectly with any advertising.” It was noted though that there were similar signs in use in other cities and towns in Massachusetts. Despite the opposition to the flag sign, no action was taken against the restaurant.

The Boston Globe, June 23, 1916, menioned that Wong You, the chef at the Green Dragon Inn, was arraigned in court on the charge of threatening to assault Ida Morgan, the owner of the restaurant, and ended up fined $25. We thus see that Ida had at least hired a Chinese cook for her restaurant.

The flag controversy was resolved. The Boston Globe, March 19, 1917, reported that “The electrically lighted American flag, which has formed part of an advertising sign over a Chinese restaurant on Hancock st, and which formed the basis of considerable controversy a year ago because the proprietress refused to remove it, has been taken down by Mrs. Ida M. Morgan, who runs the restaurant. The removal was made Saturday by Mrs Morgan, who was prompted by patriotic motives.” It took about a year to resolve this matter but everyone should have been happy at that point.

The flag sign was then put up for sale. The Boston Globe, April 22, 1917, had an ad where Ida offered for sale, “An illuminated electric American flag, 4x4 feet, double sides, 292 lamps, motor and flasher, very cheap, used little." I couldn't find out whether someone purchased it or not.

Unfortunately, and despite her good deed, tragedy struck. The Patriot Ledger, May 7, 1917, reported that a fire completely destroyed the Green Dragon. The origin of the fire was unknown though it was believed to have started on the ground floor and spread to the restaurant on the second floor. The Boston Globe, May 7, 1917, also noted that the first floor of the building had a deli and lunchroom, which were also operated by Ida Morgan. The building itself was owned by Mrs. Charles Jenness. The Green Dragon was not rebuilt.

The second Chinese restaurant in Quincy opened in 1919, again with a controversy over its sign. Proper signage seemed very important to the people of Quincy during this period. The Patriot Ledger, February 14, 1919, reported that Henry Saunders, who had owned a restaurant, with a common victualer's license, at 1514 Hanock Street for several years, had recently closed for extensive repairs. A sign in the window stated that it would reopen as an American and Chinese restaurant, and Henry had hired several Chinese as cooks.

The Mayor though refused to grant Henry a permit for a Chop Suey sign that was going to be hung out over the sidewalk on Hancock Street. This refusal though may not have actually been about signage. It was noted that the past City Councils, with one exception, had opposed granting common victualers licenses to Chinese restaurants, though no reasons were given for their stance. The one exception was allegedly in 1915, a license granted to a party at Houghs Neck.

However, I've been unable to find any confirmation that a Chinese restaurant actually opened at Houghs Neck. It would have been the first Chinese restaurant in Quincy, but a lack of evidence of its existence seems to cast serious doubt. It seems more likely that the newspaper article was mistaken, and the City Council's only exception was the granting of a common victualer's license to Ida Morgan. Otherwise, the newspaper would still have been incorrect as Ida Morgan would have been the City Council's second exception. The most logical solution is that the Houghs Neck reference was incorrect, and the Green Dragon was the Council's lone exception. 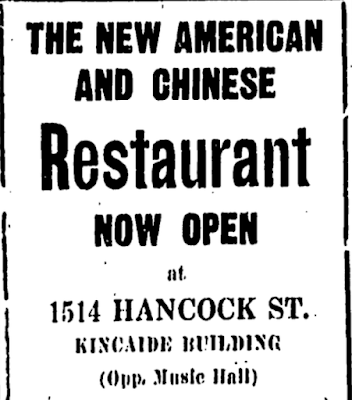 The Patriot Ledger, March 5, 1919, published an advertisement for The New American and Chinese Restaurant, located at 1514 Hancock Street in the Kincaide Building. The new restaurant, owned by Henry M. Saunders, would have a dining room with a seating capacity of 175 people. It was also noted as the "only one of its kind in Quincy." With the City Council's general opposition to Chinese restaurants, Saunders was fortunate to be able to open. This restaurant would exist until sometime in 1921, until possibly it was sold as a new Chinese restaurant took over that address.

There was a brief mention in the Patriot Ledger, November 5, 1921, of King Fong helping set up a temporary Chinese cafe for a Home Comforts Exposition, the first of its kind in Quincy. 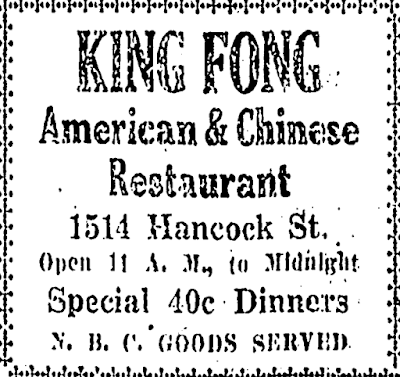 The Patriot Ledger, March 3, 1922, had an ad for King Fong, an American and Chinese restaurant, that was open from 11 a.m. to midnight, and offered Special 40 cent dinners. It's unknown whether this restaurant was owned by a Chinese or not.

The Patriot Ledger, April 29, 1922, had a different ad for King Fong, though it didn't actually mention the restaurant's name. There was also a mention of a Chicken Chow Mein Special for 50 cents.

Sadly, fire struck this Chinese restaurant too. The Boston Globe, August 13, 1928, reported that there was a fire in the cellar of King Fong. The cause was unknown and the restaurant was badly smoked up. The restaurant must have then decided to quit as in January 1929, the address was available for lease. By May 1929, Alpert's Fur & Dress shop now occupied the site of the former restaurant.

To Be Continued...
Posted by Richard Auffrey at 2:30 AM